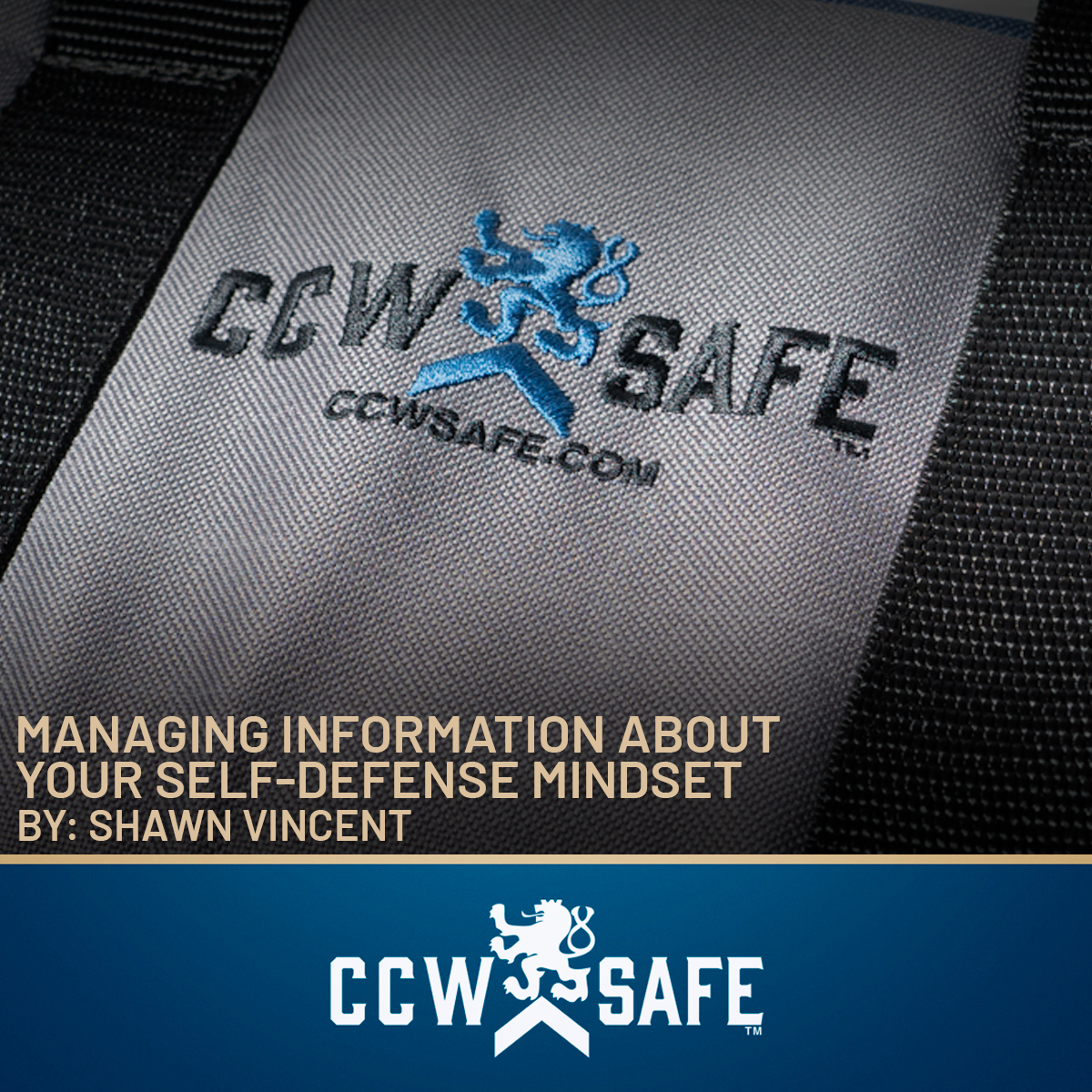 Posted on October 21, 2022 by Justin Collett in Shawn Vincent

Managing Information About Your Self-Defense Mindset

In the aftermath of a self-defense shooting, “if the forensic evidence is clear, the only thing that matters is what you were thinking and why you were thinking it at the time you pulled the trigger.” That’s what Don West says. He is a criminal defense attorney and National Trial Counsel for CCW Safe. Fatal or not, shooting someone is a serious crime, and the only real legal defense is that the use of deadly force was necessary because the defender had a reasonable belief that they faced an imminent threat of great bodily harm or death. The term “reasonable belief” speaks to the shooter’s mindset. If there is a hint of anger or malice, an otherwise justifiable self-defense shooting could be transformed into a murder case. When investigating a self-defense shooting, investigators will seek evidence that speaks to the defender’s mindset.

Over the last weeks, we’ve been exploring issues for armed defenders to consider in the wake of a self-defense shooting, and we have stressed that defenders should not make detailed statements to law enforcement officers without the advice of an attorney. It is well-established that what you say “can and will be used against you in a court of law,” but that maxim, which is enshrined in your Miranda rights, applies to more than what you choose to tell police during an investigation. Practically, anything you have said anywhere to anyone at any time could be used against you — if law enforcement can discover it, and if it speaks to your mindset at the moment you pulled the trigger.

Detectives will get access to your phone, to all your texts and emails, and to all your social media accounts. They will interview your family, friends, coworkers, acquaintances, and perhaps even known enemies. If investigators encounter evidence that demonstrates a history of violence, a hot temper, a disregard for the value of human life, or a flippant attitude towards firearms — then that evidence could be used against you in a criminal prosecution.

We have written extensively about the Gerald Strebendt case. After being rear-ended on a dark highway on a rainy night, Strebendt got out of his vehicle and foundthe other motorist aggressively shouting obscenities and making verbal threats. Strebendt, who had armed himself with a rifle he legally kept in his vehicle, backed away, called 9-1-1, and pleaded for the aggressor to stay back. After the other motorist got close enough to grab Strebendts’s rifle, the defender fired a single fatal shot.

At first, the shooting appeared to be a relatively clear-cut case of self-defense, but as detectives investigated, they found that Strebendt, a veteran Marine sniper and retired professional MMA fighter,  had a history of being involved in road rage incidents, according to his ex-wife. Six days before the shooting Strebendt posted on Facebook: “If you like to drive slow guess what? You should be in the slow lane. If you want to drive greater than the speed limit guess what? You should be in my lane. If you get this confused somehow guess what? I will strike hard and fast like a cobra should the opportunity present itself.” There was more in his past that affected his legal defense. Investigators amassed a horde of prior bad acts and troubling statements that Strebendt’s lawyer later referred to as a “parade of horribles.”

That evidence fueled the prosecutor’s pursuit of a conviction. Strebendt’s lawyer fought to exclude the “parade of horribles” from the evidence that a trial jury would be permitted to see, but when it became clear that the court was unlikely to rule in the defendant’s favor, he reluctantly struck a plea bargain deal for a reduced charge and shortened prison sentence. Strebendt’s case shows that what you say can be used against you in a court of law — even if you say it days, months, or even years before the self-defense shooting.

We’ve explored other cases where post-incident statements helped convict armed defenders. After David Byron Smith killed two teenagers who broke into his house, he was recorded calling them “vermin,” and he callously told his friend next door that he had “solved the break-ins in the neighborhood.” Neither statement played well with jurors who convicted him of murder. Similarly, Markus Kaarma shot a trespassing teenager in his garage. On a jailhouse call, according to the Flathead Beacon, Kaarma was recorded saying that his neighbors should congratulate him for killing a “felon,” and that “everyone should rejoice that our neighborhood is safer.” Michael Dunn, while awaiting trial for shooting a black teenager, wrote a series of letters from jail in which he called the alleged victims of the shooting “thugs” and made several racist statements. The Smith, Kaarma, and Dunn cases demonstrate that what a shooter says in the days, weeks, and months after a self-defense shooting can be discovered by prosecutors and used at trial.

Firearms instructor and CCW Safe contributor Steve Moses said that when he attends industry conferences, he often encounters merchandise that makes light of the use of deadly force – things like “Punisher” skulls to be mounted on pistols or bumper stickers that read “DRIVER CARRIES LESS THAN $20 OF AMMUNITION.” There are signs featuring a silhouette of a pistol that reads: “WE DON’T CALL 9-1-1.” While these sentiments may be humorous in the context of a firearms conference, they are distinctly less amusing when presented as evidence at a murder trial.

If you are ever involved in a self-defense shooting, your lawyer would prefer not to have to explain why the pistol you used is adorned with skulls, or why you hung a sign that suggests you’re willing to shoot trespassers before taking more reasonable steps such as calling 9-1-1. Steve says these kinds of messages are “just advertising that the defender has the kind of mindset where they think it is acceptable to kill someone for the least possible reason.”

The lesson for concealed carriers is that before you post on social media about guns or self-defense, consider how that message would be perceived if it were presented as evidence at your murder trial. If a homicide detective were to read your texts and emails, what would they say about your attitude about firearms and self-defense? Would a jury find those attitudes reasonable? What you say to family, friends, neighbors, and acquaintances before and after a self-defense shooting could become trial testimony later. If you are arrested, your jail calls will be recorded and authorities will read your correspondence, and it could be used against you. Don West says, “Lawyers don’t change the facts. They do the best they can with the facts they have. So don’t make bad facts. Give yourself the best possible chance of having the right and fair outcome.”