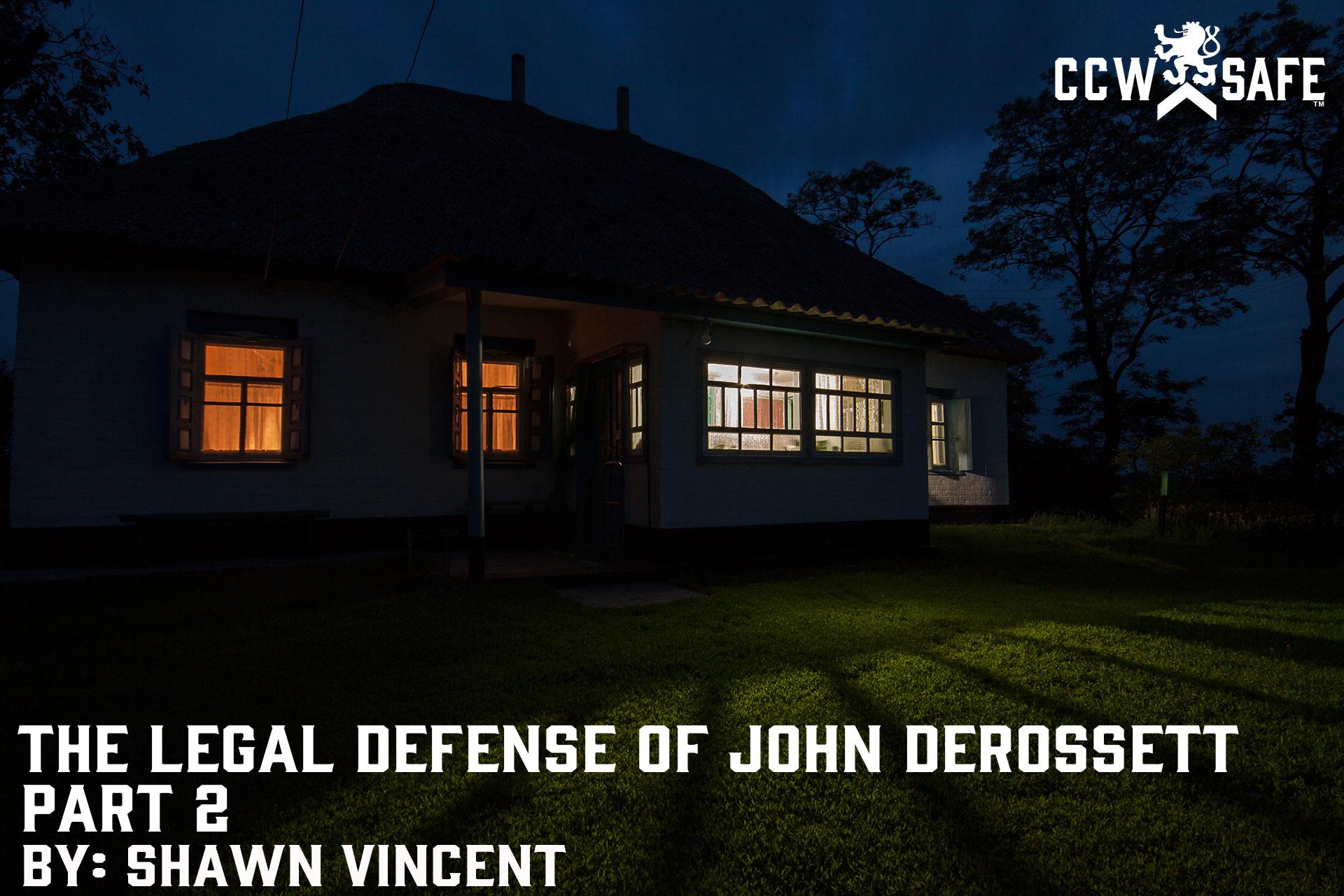 Posted on February 18, 2022 by Shawn Vincent in In Self Defense

When John DeRossett heard his niece Mary’s frantic screams for help on the night of August 20, 2015, he immediately grabbed his pistol and ran to the front door. John knew that Mary had the potential to get herself into trouble. He reluctantly agreed to take her into his home at the behest of concerned family members when she needed help, and he knew she struggled with opioid addiction. Recently, Mary had resorted to prostitution to fund her addiction, but John did not know the extent of her activities. When he saw her struggling on the ground with two shadowy figures in his dark, poorly lit front lawn, he feared she was being kidnapped by sex traffickers so he fired a warning shot into the night sky hoping to ward them off.

What John didn’t know is that the men in his yard weren’t sex traffickers,  and they weren’t kidnappers. They were Brevard County sheriff’s deputies. A rookie officer had come to the door in plain clothes, disguised as a “John,” and attempted to make an out-of-policy unwarranted arrest for second-degree misdemeanor solicitation. Only four days on the job as an undercover officer, he failed to identify himself as a deputy. Two other deputies providing backup in the yard were also out of uniform, wearing black sweatshirts with the words “SHERIFF” printed on the sleeves in non-reflective lettering – invisible to John and Mary as they hid in the dark shadows of the yard.

Firearms instructor Steve Moses was once part of a Special Response Team that served high-risk Writs of Possession to dangerous persons and also participated in multiple misdemeanor arrests with another deputy while working in plainclothes. Steve says that law enforcement often conducts operations out of uniform, but in such cases, they are trained to clearly identify themselves when they make contact with the subject. The officers in the DeRossett case admitted that they never identified themselves.

The deputies stationed outside the home watched John march through the living room with his .40 caliber Glock. When they saw the muzzle flash of John’s warning shot, they responded with a barrage of gunfire, and a firefight erupted in the quiet suburban neighborhood. Investigators discovered more than forty bullet defects in the front of John’s home. John himself was wounded, struck twice. A bullet grazed Mary’s leg. John, still unaware the men in his yard were deputies, shot one of them below his tactical vest, severing an artery and critically wounding him. Miraculously, everyone survived, but a deputy almost died, and John was charged with three counts of attempted first-degree murder of a law enforcement officer. If convicted, John would have spent the rest of his life in prison. It was what retired Army captain and firearms instructor Claude Werner calls a “negative outcome” for a self-defense shooting.

A young lawyer named Michael Panella ended up taking the case and representing DeRossett. Don West, National Trial Counsel for CCW Safe agreed to help, and so did I; the three of us had met when we all served on the legal defense for George Zimmerman, and we were excited to work together again. Michael was convinced, and so was Don and I, that John had been the victim of a botched law enforcement raid and that he acted lawfully based upon the circumstances as he understood them. It is important to mention that John DeRossett was not a CCW Safe member and that Don and I contributed to his defense in a private, independent capacity. It is also important to note that John has given us all explicit permission to discuss his case publicly and candidly so that other armed defenders can draw lessons from his ordeal.

One of the key lessons from John DeRossett’s experience is that firing warning shots is virtually always a bad idea. From a safety standpoint, a warning shot must land somewhere, and a shooter must take responsibility for any damage a discharged bullet causes. Firearms instructor Steve Moses notes that, from a tactical standpoint, an attacker could interpret a warning shot as an indication that the defender doesn’t have the nerve to fire a fatal shot.  Don West reminds us that, legally, a warning shot is considered the use of deadly force – even if it is aimed at the sky – and it requires the same justifications as a fatal round fired in self-defense. Attorney Michael Panella says that a warning shot actually complicates a self-defense claim because prosecutors can argue that if the shooter had the time to fire a warning shot, then the threat wasn’t imminent enough to justify the use of deadly force. “And that is if you live to talk about it,” he says. A warning shot can trigger a gunfight, as it did in the DeRossett case, and increase the chances that you don’t survive the encounter – the worst of what Claude Werner calls a “negative outcome.”

John fired his warning shot with the best of intentions. Although he suspected the men attacking his home were criminals trying to kidnap his niece, he wasn’t absolutely sure, and he had no idea how many people were out there. He clearly didn’t want his first shot to hurt anyone, although he didn’t understand that, under the law, the shot would be considered the use of deadly force.  He certainly didn’t want to risk hurting or killing his niece, and so the warning shot seemed like a good idea.

Don West says that John stated many times that his intent was to “run them off.” Don says John’s thinking was “If I go out there, and I fire the gun, they’ll know I’m serious, they’ll know I’m capable, and they will change their mind and run off. That was his logic, and that’s shared by a lot of people. It just happened to be completely wrong for the circumstances and created this avalanche of what happened afterward.”

John’s legal defense took years, and it included a complicated appellate court record. In one of the appellate decisions, the court reinforced the legal truth that if John’s warning shot was justified, he also would have been justified if he had shot and killed one of his perceived attackers (and the appellate court ultimately ruled that John didn’t know the perceived attackers were deputies). It reinforces the important point that, regardless of the shooter’s intent, a warning shot is legally the use of deadly force. A warning by definition is a kind of communication, and using deadly force as a means for communication is a bad idea.

In a situation where an armed defender might be tempted to fire a warning shot, firearms instructor Steve Moses says that a defensive display with the gun in a low-ready position along with a stern verbal warning is a much better idea. Legally, Don says that the display of a firearm without a discharge is often considered the “threatened use of deadly force,” and the potential consequences for being wrong about a defensive display are “lightyears away” from the very severe legal consequences associated with actually using lethal force.

Michael Panella sums up the legal paradox of warning shots: “If you really have to, under the law, use deadly force because the threat to you or another is so great and so imminent that there is no other real option, and then you choose not to shoot them, and you are right about the threat being so serious, then you just gave up your one shot and now you’re dead. Or if you were wrong about your presumption of using deadly force in the first place, you’ve just proved that you used it inappropriately.”

The lesson for concealed carriers and armed defenders is that you should not use deadly force to communicate a warning to a potential attacker. If you face an attacker that has the ability, opportunity, and the intent to cause you death or great bodily harm, you are justified in using deadly force to stop the attack. Don’t waste your one opportunity to defend yourself by firing a warning shot. Conversely, if your intent is to ward off a potential attacker, a stern verbal warning along with a strategic defensive display communicates your willingness to defend yourself, perhaps better than a warning shot, and it carries a fraction of the legal risk.