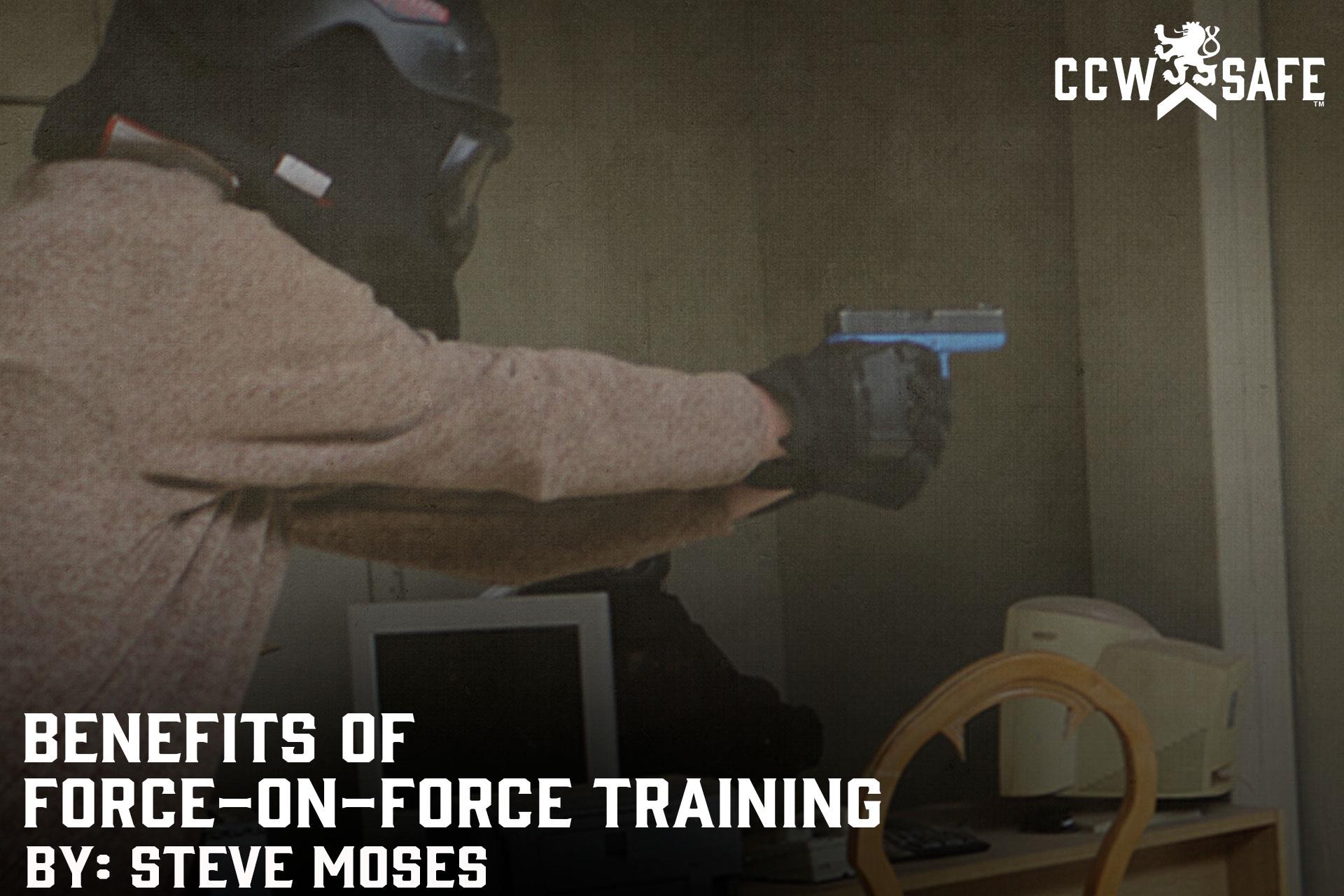 Posted on October 4, 2021 by Steven Moses in Uncategorized

I think that concealed carriers might benefit by participating in at least one Force-on-Force (“FOF”) class. FOF training typically consists of participation in scenarios, drills, and exercises in which the student (wearing at a minimum protective headgear) is pitted against either other students or role-players and airsoft pistols or Simunitions-type pistol shooting plastic paint markers are used in simulated potentially dangerous encounters with others in which an armed response may or may not be warranted.

FOF training supplements conventional target training. The more traditional method of using cardboard, paper, and/or steel targets in order to first develop marksmanship skills is critical when it comes to shooting an actual firearm. FOF training under a capable instructor can benefit concealed carriers by reducing the novelty effect associated with an encounter with another person or persons in the future where the potential for violence is very real. One of the primary benefits of FOF is learning how to see, process, and properly respond to a series of events in which it is possible to misread the situation and underreact or overreact.

I remember quite well the times that I made errors as a student participating in FOF training. It is difficult to put a price on training in a controlled environment in which only my pride is in serious danger. FOF training is a useful tool for use in preparing concealed carriers for the stresses incurred if they are later involved in an encounter in which their lives are in danger. Students typically feel higher levels of stress during scripted FOF stages knowing that a “bad-guy” role player or players may at some point of time shoot them, or that they can make a wrong decision and shoot someone they that should not have. Lack of tactical knowledge may result in the student making bad decisions, failing to maintain distance, or incorrectly using cover. Heightened levels of stress may cause the students to shoot poorly. I am unable to remember the number of times that I saw other students shoot non-combatants either deliberately or unintentionally. The good news is that students discover areas in which he or she had holes in their game that were capable of being filled in during a class instead of in an actual gunfight.

My limited experience with FOF training suggests that properly taught FOF classes should never consist of exercises that are little more than a series of competitions between adult men and woman who are doing little more than see who outshoots who. It is quite interesting seeing who is interested in learning and who is interested in feeding their ego. This is something that should be impressed upon the students at the beginning of the class and stressed throughout the day. Students that are requested to participate as role-players need to stick to the scripts and instructions provided by the instructor during training exercises. The best advice that I can give to concealed carriers playing the “Good Guy” is to always keep fighting regardless of where and how many times they get shot.

Concealed carriers who may find merit in this article would be well served to attend classes taught by instructors like Craig Douglas and Karl Rehn. Instructors like these men have put way more thought into conducting FOF instruction than I ever have (or will). Much of what I teach is based upon my being a student in Craig’s classes, including the use of student-owned airsoft pistols.

One last thing: it is entirely possible for students to sustain eye injuries and chipped teeth. Students watching (but not participating in) a FOF exercise should always wear wraparound protective eyewear at a minimum. I typically wear a shemagh around my neck and wear a light jacket when participating in FOF training in order to reduce the light bruising on my arms and neck whenever I am concerned about it drawing unwanted attention from others after the class.

In summary, FOF training can drive home some lessons that simply cannot be learned during conventional live-fire training. FOF training is possibly visualization in its finest form.