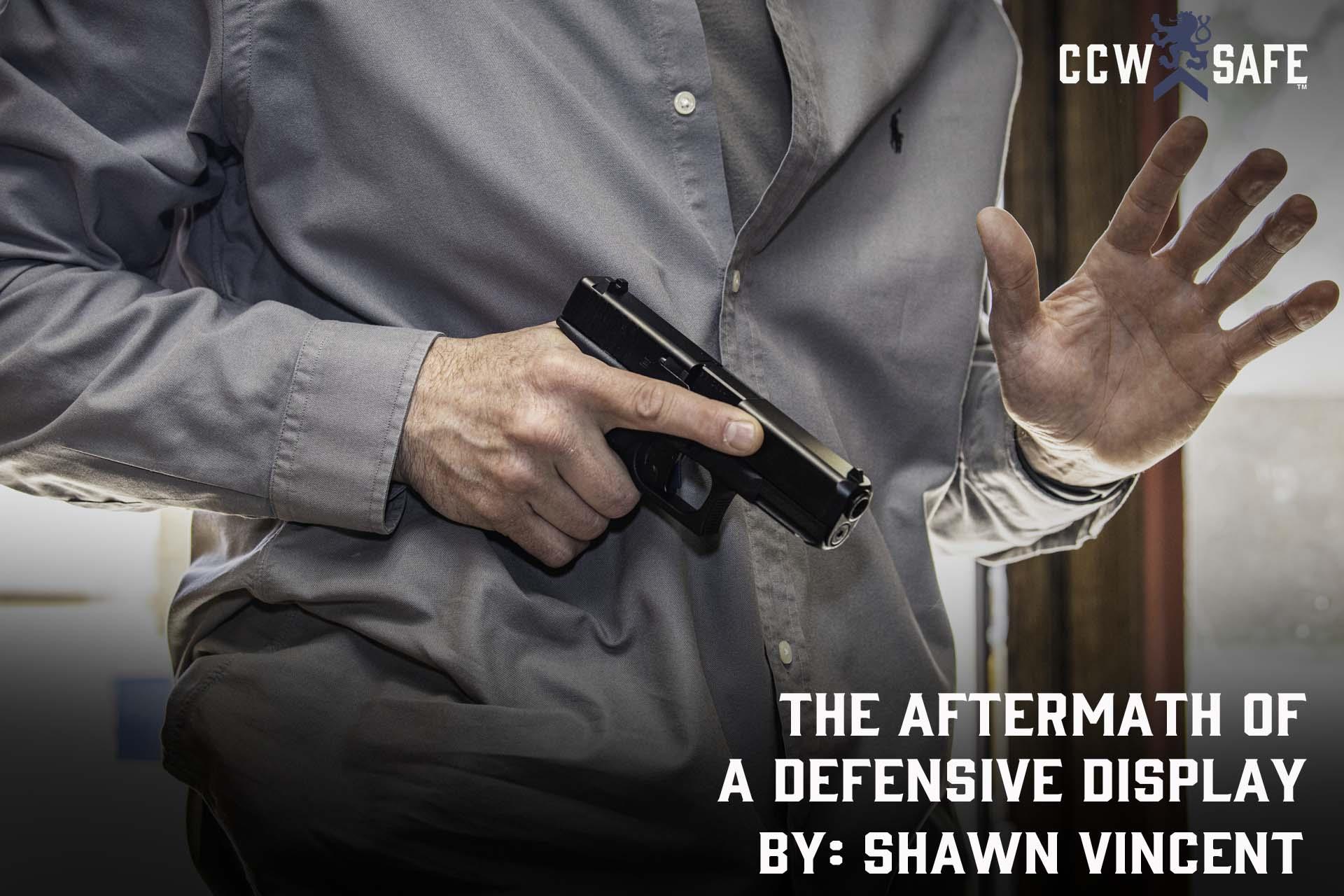 Posted on January 22, 2021 by Shawn Vincent in In Self Defense

The Aftermath of a Defensive Display

The Aftermath of a Defensive Display

Don West, National Trial Counsel for CCW Safe, says the most common call he takes from CCW Safe members with legal concerns involve incidents of defensive display — that is, when a gun is used in a threatening manner without being fired. Unless a defender is legally justified, a defensive display can be considered brandishing or assault, and such charges can carry significant punishments. Defensive display is serious business that comes with considerable legal risk.

But that’s not to say that defensive display is not a viable less-lethal tactic for a defender. Recently, we revisited the Sheri McClatchy case out of Mississippi where McClatchy, an attendant at a laundromat, was attacked by an angry patron. After escaping a brawl that saw both women fighting on the floor, McClatchy went to her car and retrieved her pistol.  She held the pistol in a Low Ready position as the angry patron tried to re-engage, and when the attacker got too close, McClatchy pointed the gun directly at her. Luckily, it was enough to stop the attack. The angry patron fled, no shots were fired, and no charges were filed against the defender.

In a podcast last summer, we also revisited the Michael Drejka case where Markis McGlockton violently shoved Drejka to the ground during a verbal confrontation over a handicaped parking spot. Fearing McGlockton would press the attack, Drejka drew his pistol, pointed it at his attacker, and paused for a moment. Security footage shows McGlockton back up several steps during that moment, but Drejka fired a fatal shot nonetheless. The display of the weapon seemed to have stopped the attack, and had things ended there, it’s unlikely that Drejka would have faced serious charges. Instead, he’s serving a prison sentence for a manslaughter conviction. A defensive display could have spared McGlockton’s life and preserved Drejka’s freedom.

In both of these cases, the defenders faced a clear threat; they had both been physically attacked by the aggressor. With the help of security footage, McClatchy was obviously able to articulate why she felt the angry patron was a threat, and she justified her defensive display. Had Drejka not fired, he too would likely have been able to justify his decision to draw his firearm to stop the attack. However, the trouble with brandishing events, Don West says, is that in many cases, the nature and imminence of the physical threat isn’t quite as apparent as it was in the McClatchy and Drejka cases. Too often, in response to a tense verbal confrontation, defenders draw their firearms before the threat of physical violence is absolutely evident.

Don says, “Displaying a weapon in a public place or pointing a gun at somebody without being able to clearly articulate exactly why you felt threatened enough to warrant the display of a firearm can be treacherous legal territory to navigate.” Don stresses that the same elements that justify the use of deadly force must also be in place to justify a defensive display. The defender must have a reasonable belief that the threat is imminent and that the attacker has the ability to cause serious bodily injury or death.

It is also critical that the use of force must be proportional to the threat. The biggest self-defense controversies arise from instances where armed defenders use deadly force or threaten deadly force against unarmed attackers. We call it the defender’s dilemma. There are scenarios where a defensive display may be justified against an unarmed threat, but the actual use of deadly force would not be justified (both Drejka and McClatchy’s cases seem to fall in this category), adding to the legal risk assumed by defenders who execute a defensive display.

In the aftermath of a defensive display, Don says many members want to know if they should call the police, even if no one was injured. It’s a simple question with a complicated answer. As we’ve established, displaying a weapon is a serious event with potential criminal consequences, and the responsible thing is to report it.  “If you are clear in your own mind, and the facts seem to support that you had a legal justification, then obviously you’re better off reporting it, assuming the other person will,” Don says. “It’s almost that cliché that ‘whoever gets to the phone first is the victim.’”

Unfortunately, the details of a defensive display are not always clear. Don says, “Sometimes the facts are a little slippery, or the justification for displaying a weapon is not very compelling, and there may be reason for a shooter not to call police and draw attention to themselves, especially if it seems unlikely the other party would report the incident.” This is a serious legal consideration, and it’s best done with the advice of a lawyer.  “If there are shots fired or a violent act of some sort was involved, you almost always want to get ahead of that,” Don says.

Firearms instructor and CCW Safe contributor Steve Moses also reminds us that, in the immediate aftermath of a successful defensive display, “you need to disengage and get into a safer more defensible position as soon as possible.” If you stick around, there is a chance that the attacker will re-engage, perhaps emboldened by a belief that you were unwilling to actually pull the trigger.

Last September, at the end of a long summer of social unrest, Nebraska bar owner Jacob Gardner got into a confrontation with a suspected looter outside his business. When things got heated, Gardner displayed his weapon, ending the immediate threat, but he inexplicably stayed at the scene and was later attacked. Gardner killed his unarmed attacker, and weeks later, upon news that he’d be prosecuted for the shooting, Gardner took his own life.

The lesson for concealed carriers is that defensive display is a serious event, one that usually warrants involving police, and one that justifies consulting with a criminal defense lawyer.  If you find yourself in a confrontation that you fear could become violent, defensive display is a viable alternative to the use of deadly force, but it’s not to be taken lightly. After a defensive display, you need to move to a safer location, and you need to be prepared to clearly articulate why you believed the threat was severe enough and imminent enough to warrant drawing your firearm. If you have any concern about how you might explain a defensive display to law enforcement, or if you would have any reservations about reporting the incident yourself, you are probably not in a position where defensive display would be appropriate.