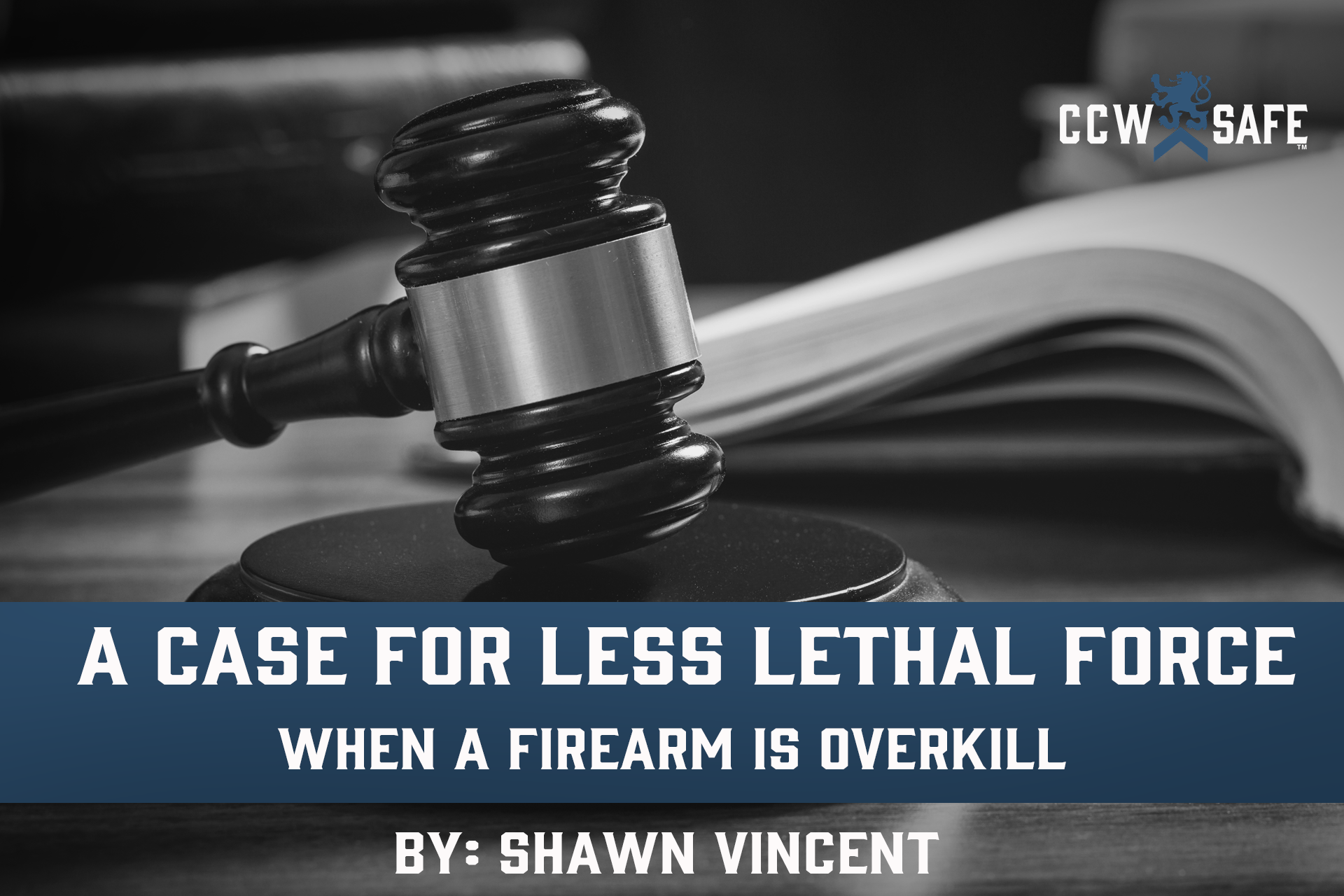 Posted on July 3, 2020 by Shawn Vincent in In Self Defense

A Case for Less Lethal Force: When a firearm is overkill

A Case for Less Lethal Force:

When a firearm is overkill

Sheri McLatchy drew a gun on a customer of The Clothes Basket laundromat in Holly Springs, Mississippi. McLatchey worked there as an attendant, and moments earlier, she had been in a fight with an angry patron who had attacked her and dragged her to the ground in a nail-scratching, hair-pulling melee — all of it captured on video. Apparently, the patron became enraged when McLatchy admonished another customer for overloading the machines. We first told you about this case last summer.

McLatchy escaped the fight, called 911, and retrieved a pistol from her car. When the patron re-engaged in the parking lot, McLatchy raised her pistol against the unarmed attacker. Wisely, the attacker walked away and left the premises. McLatchy didn’t have to fire a single shot. A security camera captured the second encounter as well.

Thanks, in large part, to the surveillance video, police quickly recognized that McClatchy had been attacked and that she was defending herself when she pulled her firearm. No charges were filed. It was the best possible outcome for McLatchy in a situation where things could have easily gone terribly wrong.

Had the angry patron pressed the attack, McLatchy may have fired, and law enforcement would have scrutinized her decision to use disproportionate force on an unarmed attacker. She could have faced murder or manslaughter charges.

Don West, criminal defense attorney and National Trial Counsel for CCW Safe, notes that, without the surveillance video, the angry patron could have claimed that McLatchey drew her pistol unprovoked, and in the eyes of the police, the story might have changed from self-defense to “That crazy lady pointed a gun at me.” In that case, McLatchey could have faced felony assault charges for brandishing a deadly weapon.

The lesson we drew from this case was that McLatchy took a big legal risk when she used her firearm to defend against an unarmed assailant. Don West says, “This is a good example of where, had there been some other kind of non-lethal weapon available, some sort of intermediate option, she clearly had the right to do that.”

Weapons instructor and CCW Safe contributor Steve Moses agrees, although he prefers the term “less lethal” to “non-lethal.” Steve reminds us that virtually all use of force, under certain circumstances, can result in death. It underscores the fact that, just because the attacker in McLatchy’s case wasn’t armed, it doesn’t mean she was incapable of causing great bodily harm or death. “Fists can be very, very dangerous,” Steve says.

McLatchy absolutely had the right to defend herself, and Steve says, “There’s a lot of good reasons that having something other than a handgun would have been good.” That “something other” could have been pepper spray, or OC. Steve’s a strong proponent of pepper spray, and in his CCW Safe article “Filling the Gap Between Too Little and Too Much Force,” he recommends concealed carriers should also consider carrying OC for responding to low-level force incidents.

Don West says that the legal liability of using OC spray is much lower than that of even displaying a firearm. “If you can safely use OC in virtually any situation where there’s a significant issue of the level of threat, it’s a better choice than going to the gun.”

“In the court system, you don’t bring a gun to a fistfight,” Don says. “Before you bring a gun into a confrontation with someone who’s unarmed, you better be able to say why you really believe that if you didn’t, you were going to be seriously hurt or killed. Not only do you have to be able to articulate it, the prosecutor and ultimately the jury has to accept it. That’s a high-risk legal maneuver.”

Don West notes that in virtually all circumstances, “pepper spray and its variations are not considered deadly force. Right there, you have a huge legal difference between the display and the use of a firearm versus the display and ultimate use of pepper spray.”

The lesson for concealed carriers is that a firearm is not a one-size-fits-all solution to every self-defense situation. Concealed carriers who recognize the danger of unarmed assailants should consider adding a less lethal alternative to their self-defense tool kit, and OC spray is comparatively inexpensive, easy to carry, and easy to use. Most importantly, if you can end a potentially violent confrontation without using deadly force, it’s better for everyone involved — not just for the attacker whose life is spared, but also for the defender who saves himself or herself from serious legal liability.