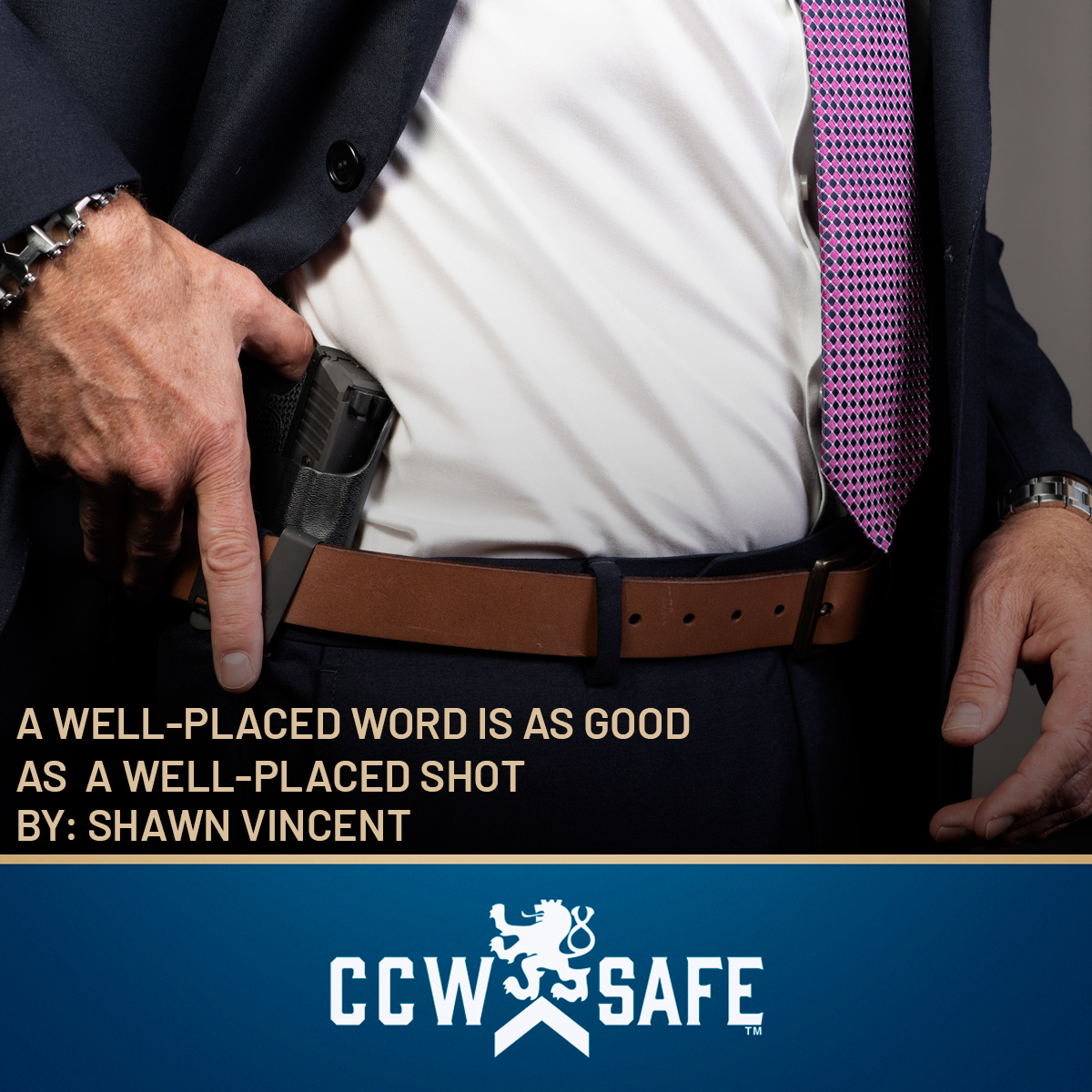 Posted on July 29, 2022 by Justin Collett in Shawn Vincent

“I know the potency and power of a well-placed word,” says Craig Douglas, “and it’s as potent and powerful as a well-placed shot.” Craig’s a veteran of law enforcement, a former undercover cop, and the founder of ShivWorks which provides tactical training to people in 48 states, 12 countries, four branches of the US military, and five federal law enforcement agencies.

Craig says, “If one chooses to take on the responsibility of carrying a gun in a public space, then the onus is even greater for people to have parity in other skills like good language, good verbal agility, and good social literacy.” He calls these skills “verbal jujitsu,” and as a narcotics officer, he used it to avoid gunfights in the line of duty. Now, as part of his training business, Craig teaches concealed carriers how to use verbal skills to avoid deadly force incidents in their personal lives.

A key component of Craig’s training program is what he calls “MUC,” or Managing Unknown Contacts. Many of the potential threats that a concealed carrier may encounter present first as strangers on the street, and in the first critical moments, it may not be clear if the unknown contact poses a legitimate threat or whether or not they are armed. Such a circumstance creates the possibility for what Craig calls “violence intertwined with ambiguity.”

The idea of ambiguity is central to our concept of the “armed defender’s dilemma” which describes the challenge of concealed carriers facing an apparently unarmed aggressor. We know that a person doesn’t have to be armed to pose a threat of great bodily injury or death, but criminal defense attorney and CCW Safe National Trial Counsel Don West says using deadly force against an unarmed person creates legal challenges after the fact. “It’s a harder case to defend when you’ve used a deadly weapon against someone who is unarmed or who is, at least, portrayed as not  having a deadly weapon.”

That’s where verbal jujitsu comes in. If the armed defender can use communication skills to disambiguate the potential threat of an unknown contact, it may be possible to avoid a violent confrontation in the first place.

Craig says that maintaining a safe distance from an unknown contact is critical. Once someone has gotten within what Craig calls “wingspan,” the potential aggressor has a huge advantage, and the defender has little time to react. Before an unknown contact gets too close, an armed defender can use verbal skills to buy time and disambiguate the threat the person presents.

In his training sessions, Craig instructs his clients to begin verbal contact by making a request that is spoken firmly but not aggressively – something like “Hey man, can you hold up?” Beginning with a question such as “What’s up?” or “What do you need?” invites the unknown contact to engage in conversation and continue their approach. Opening with a command such as “Stay back!” could aggravate the situation, especially with someone who didn’t necessarily mean you any harm. “With the opening salvo of your language,” Craig says, “you’re trying to halt someone’s approach, not to create a problem.”  A firm request stated as an “ask,” communicates the desire to establish a safe distance without escalating the tension with an unknown contact.

If the “ask” fails, and the unknown contact continues to advance, Craig instructs his clients to increase the volume and move to a command, or as Craig says, a “tell” – something like “Whoa, back up, man!” Craig says, “You can project volume without necessarily connoting hostility, and that bump in volume, if done correctly, and it’s unexpected, quite often is enough to really put somebody back on their heels.”

If both the “ask” and the “tell” fail, and the unknown contact continues to approach, then the stranger’s intentions become much less ambiguous, and the defender can consider use of force options with more confidence that their actions may be legally justified. In the wake of a self-defense shooting, being able to articulate every effort made to clarify the potential threat and de-escalate the situation could serve to strengthen the legal justification for deploying deadly force. Your ability to explain how an attacker ignored your ask and continued approaching even after a stern command will help you distinguish yourself as a thoughtful defender who made a clear effort to avoid a deadly conflict.

The lesson for concealed carriers is that by incorporating verbal skills in your self-defense toolbox, you’ll be more prepared to manage encounters with unknown contacts, and should you be forced to use deadly force, you’ll be more prepared to articulate the efforts you made to assess the nature of the threat and ward off your attacker. There is much more to MUC than verbal jujitsu, and you can find out more about that on ShivWorks.com. Next week we’ll discuss some of Craig Douglas’ recommendations for how to handle an attacker when your verbal skills fall short.