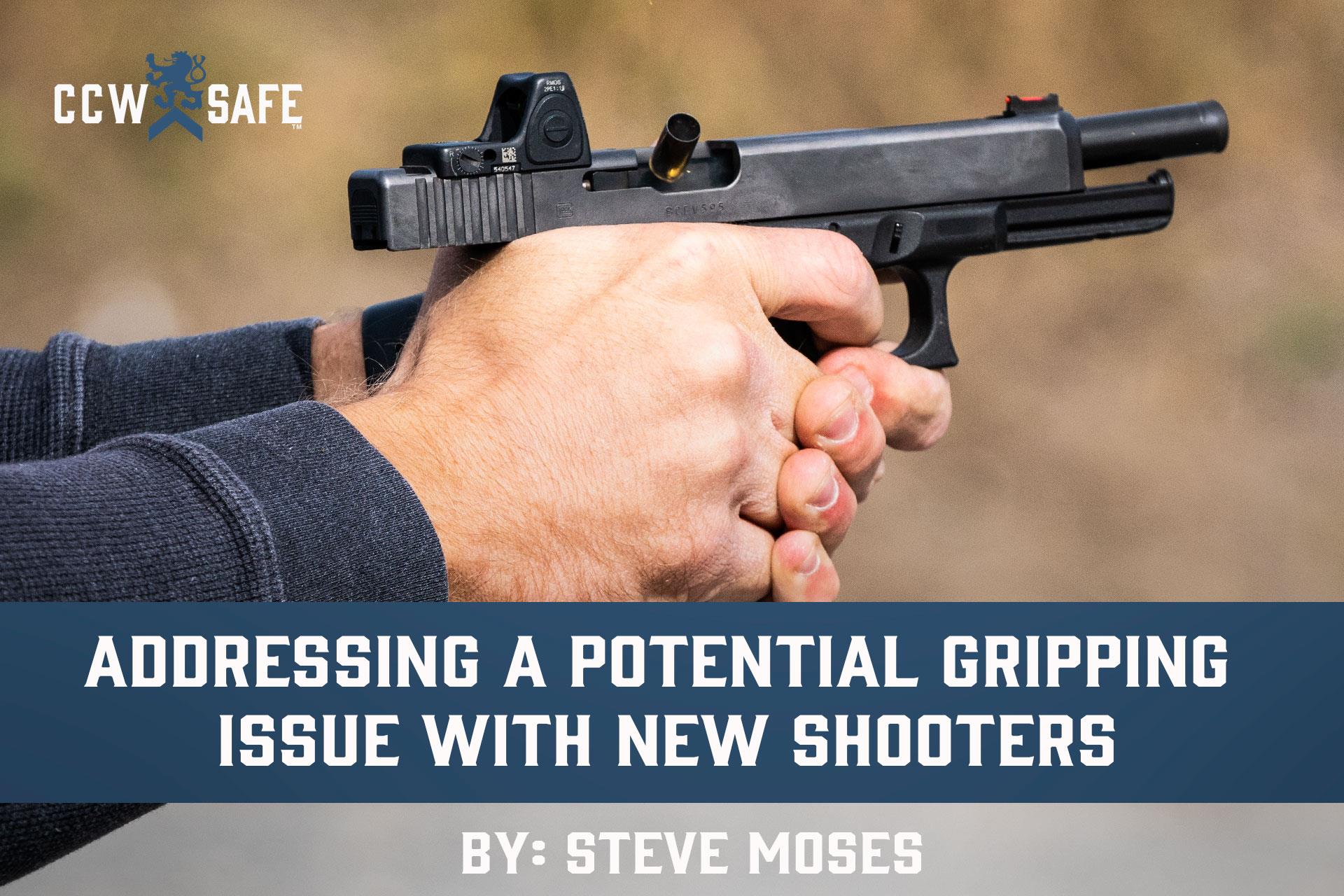 Posted on November 30, 2020 by Steven Moses in Training

When it comes to fitting students to the proper handgun in order to achieve the best possible outcome, defensive firearms instructor and USPA Grand Master Karl Rehn uses an engineering-based approach that includes knowledge of what constitutes acceptable hand strength as well as the dimensions of the most commonly chosen defensive handguns. Hand size and handgun dimensions notwithstanding, individual hand strength may also dictate the type of grip that should be used. Karl has observed that students with a grip of less than 60 pounds as measured by using a Captains of Crush “Guide” (60 pounds) gripper may have trouble maintaining any two-handed grip other than the thumbs-down grip (support hand thumb is locked down over the dominant hand thumb) during the recoil of most 9mm pistols. In other words, the student’s grip momentarily comes apart when the handgun is fired. This causes the student to re-establish a proper grip (which costs time) or continue to shoot without a proper grip (which can affect accuracy).

However, proper hand positioning and adequate hand strength alone does not solve all gripping problems. It is not uncommon to see students with gorilla-like grip strength and massive hands shoot poorly.  Instructors observing this will often counsel these students to “stop jerking the trigger.” This may result in a temporary improvement as the student will typically focus hard on slowly and carefully pressing the trigger, but it often starts to break down over time and almost certainly anytime the student attempts to make good hits while shooting at speed.

I have been practicing defensive handgun shooting for a long time and pieced together instruction that I received from a variety of firearm trainers over the years in order to develop the way that I teach students how to grip the handgun properly. Some recent revelations occurred shortly after I ran about 500 rounds through a Glock 48 in a Dave Spaulding Advanced Covert Pistol class in which I spent both days getting coached by Dave and shooting next to and conversing with Mike Green of Green-Ops, Inc. Mike is a phenomenal shooter with an impressive background including 15 years in Special Forces and having served as an instructor for the Special Forces Advanced Urban Course. A few days after the class I listened to an Off Duty On Duty podcast with host Bryan Eastridge and guest Spencer Keepers in which they discussed why they think that a proper grip is more important when it comes to shooting a handgun accurately at high speed than perfect trigger control. After giving thought to what I had heard from all of these gentlemen and thinking back to a Red Dot Sight Instructor course taught by Modern Samurai Project’s Scott Jedlinski that I attended, I am in the process of rethinking how I might better address the issues of jerking the trigger with a future student. Set out below are some of those thoughts.

We recently taught a one-hour training block for five of our experienced students with all shooting being done at three yards on 2.5” x 3” rectangles (an index card cut in half) in which the students shot nothing  but singles and triples starting from a horizontal combat ready position (both hands on the gun and pulled in close to the chest) and pairs from the holster. The results were excellent with one student commenting that he had never before had this much control over where his bullets were consistently hitting.

Is this a guaranteed fix? Probably not, but it will likely work for some. As always, I give credit to all of the firearms trainers above for providing me with insights big and small and accept full responsibility for any errors made in my articulations.