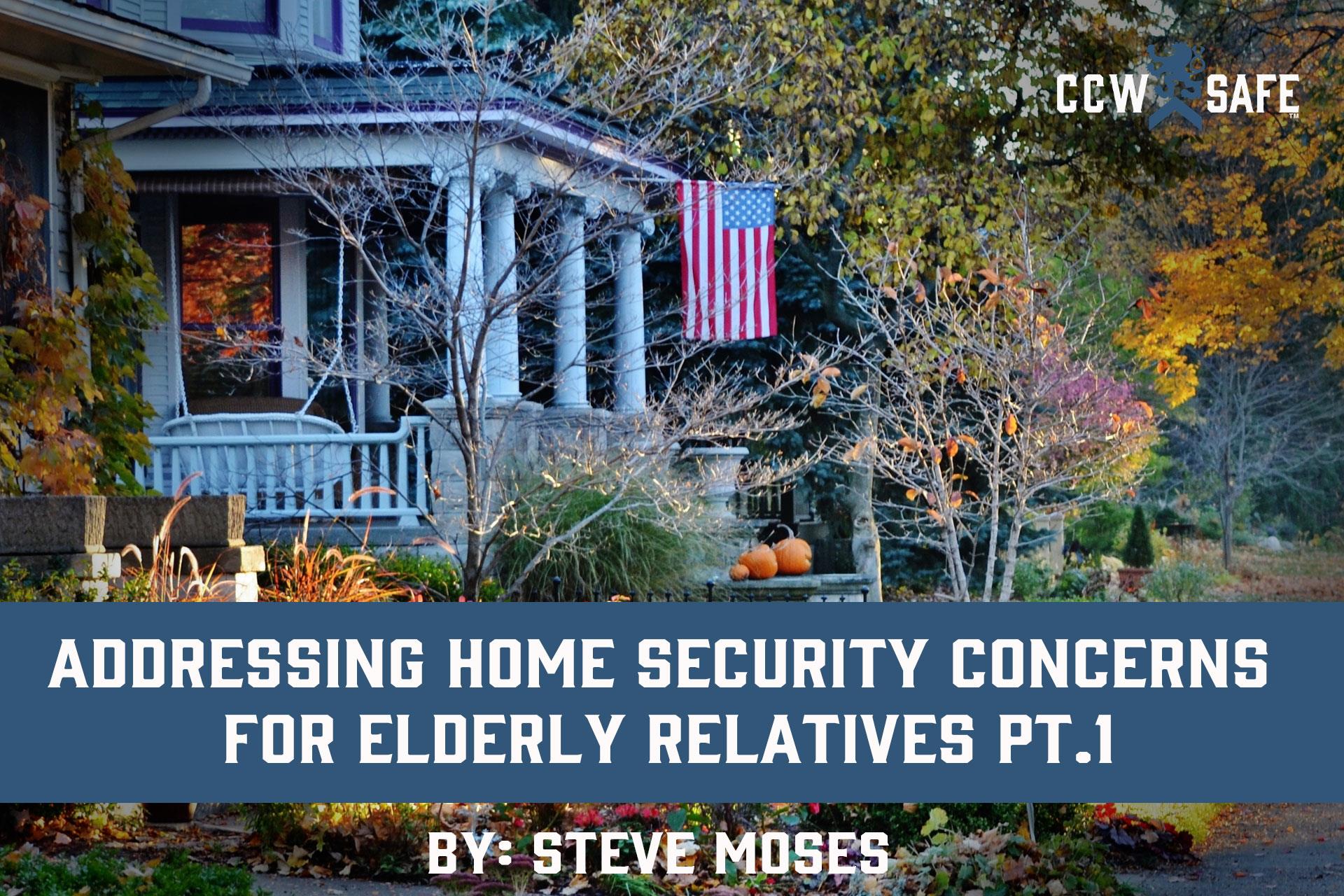 Posted on September 21, 2020 by Steven Moses in Training

I appeared as a guest on a recent episode of RESPONSIBLY ARMED RADIO along with Melody Lauer, another defensive firearms instructor and friend of mine. The hosts were Tatiana Whitlock and Judi Wells.  Both are talented defensive firearms instructors and communicators with impressive backgrounds. I still view myself very much as being a student as well as an instructor, and I would gladly participate as a student in a course taught by any one of the three. The topic that Melody covered was addressing home security concerns for children, and mine was the same but for elderly relatives. It struck me afterwards that this was a topic that should be incorporated into a CCW Safe article. I immediately pulled up the show notes that I had prepared and started on such an article.

I think a home security plan for elderly relatives should consist of three concentric rings. The outer ring starts at the property line and extends to the outer perimeter of the residence. Criminals will use the dark as concealment, so installing exterior lights on porches makes it significantly more difficult for them to approach the house without being seen. Lights that incorporate motion detectors are preferred. Most criminals realize that if the exterior floodlights come on then homeowners may become aware of their presence. Signs on the perimeter that announce that the residence is protected by a monitored security system are always going to be a major plus. The objective of defending the outer security ring is to convince would-be criminals that the risk of being arrested or shot for breaking and entering into that particular residence is simply too great. Recommended are highly visible address numbers on the curb and exterior of the residence in order to ensure that responding law enforcement have no problems identifying the correct property in response to a 911 call.

The middle ring includes all points of possible ingress such as doors, windows, and garages. Doors and windows need to remain locked at all times. Electronic keypads on the front and back doors make it easy to keep the doors locked since a key is not required to unlock the doors if a homeowner needs to step outside for a few minutes. Holly bushes with sharp-edged leaves or cacti planted next to windows make it much harder for someone on the outside to get close enough to break a window and enter. If the residents have no immediate plans of leaving the house then the doors should be deadbolted. Recommended are robust strike plates that are attached with extra-long screws, as these are what usually fail if someone attempts to kick in a deadbolted door. Keeping these doors deadbolted whenever possible and the security system turned on is important, and this is especially true at night.

Given a choice, an alarm that goes directly to the local law enforcement agency is preferable to one that first goes to a monitoring alarm company who then calls the resident, followed by a call to local law enforcement if deemed necessary. A strategically placed camera/monitor system allows homeowners to see who is at the door and even talk to them through an intercom. Everyone regardless of age should always be able to see who is at the door before opening it and know who the person is before allowing them to enter. If a person claims to represent a company or agency it would be a good idea to call them and ask for confirmation of  employment.

If someone needs assistance, an elderly relative can offer to call 911 on their behalf. If the other person said that they need to contact someone because their car broke down or for a similar reason, a far safer response would be to offer to make a call on their behalf and relay the message. This can perhaps best be summarized up by stating that elderly relatives should never take any action that makes direct physical contact possible with anyone they do not know. Actually, it is great advice for all of us regardless of age and capability.

The inner ring covers the interior of the house. I recommend leaving some kind of low intensity lighting on throughout the house at night. This means intruders are unable to remain unseen and homeowners can see well enough to know what is going on and more effectively defend themselves. Installing timers that automatically cause selected lights or lamps to come on at dusk and go off at full light in the morning work extremely well. Elderly residents should select a default safe room such as the bedroom to remain in or move to rather than risk a confrontation with a possible intruder.

Homeowners can use a Sabre door brace lodged against the knob of the bedroom doorknob to secure it. An even better idea is to install a solid core bedroom with a deadbolt. Homeowners who can stay in a corner of such a room on the same side of the entrance (often referred to a “hard corner”) with either a firearm or a standard size can of pepper spray can be a force to be reckoned with. Having the phone on their person or close by at all times is critically important in order to summon law enforcement.

These older individuals may require our assistance in terms of acquiring some of the equipment described above and training in order to be able to use it. A written checklist detailing all of the actions they need to take on a daily basis posted in a conspicuous area can assist in making sure that all tasks are accomplished each day is good idea.  Part Two of this article will discuss actions that elderly persons may need to take in the event that an intruder is threatening or attempting to enter the residence.