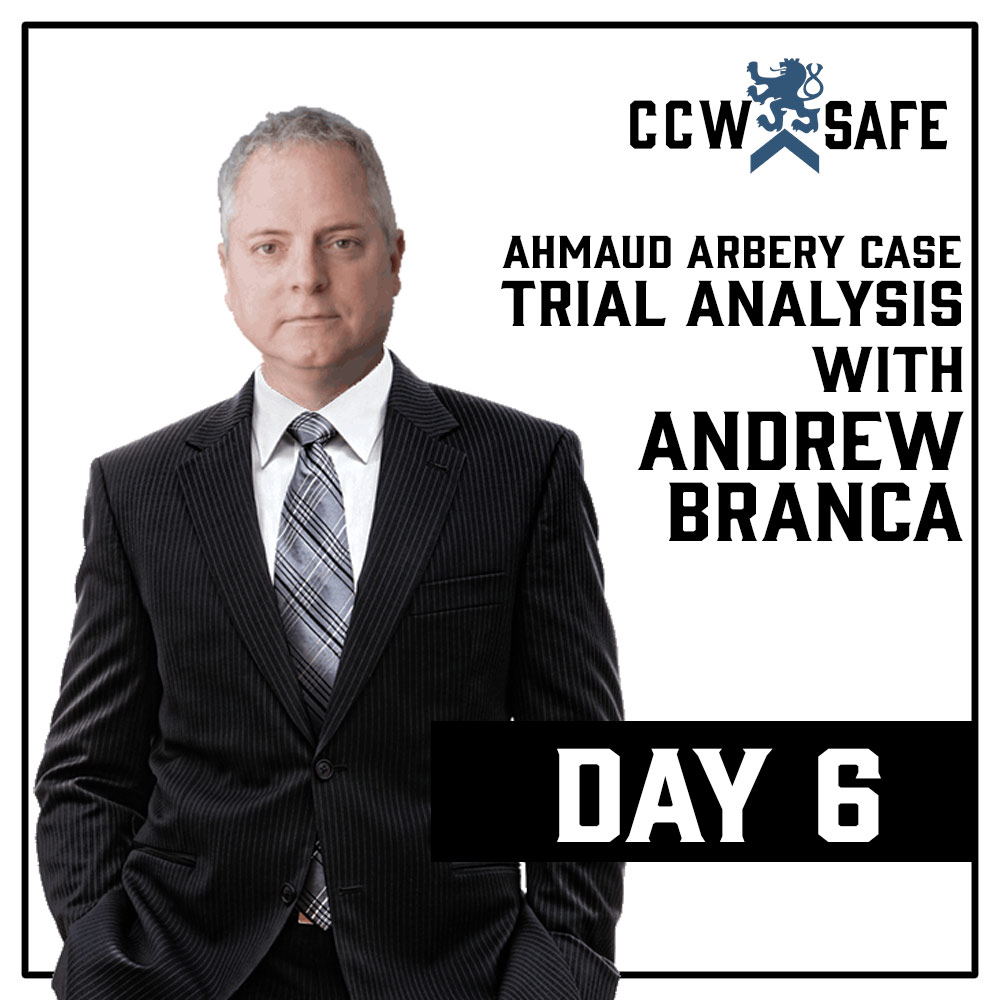 Posted on October 27, 2021 by Andrew Branca in Uncategorized

Welcome back to our ongoing coverage of the Ahmaud Arbery case, in which defendants Greg McMichael, Travis McMichael, and William Bryan are being tried for murder and other charges in the shooting death of Arbery.  I am, of course, Attorney Andrew Branca, for Law of Self Defense.

Today the court proceeded with jury selection, or voir dire, in the case, with the goal of empaneling 12 jurors and 4 alternates.  Today was the fifth group of prospective jurors put through the selection process, with each group nominally numbering 20 people.

One exceptional part of today’s proceedings, and the cause of an hour-plus-long delay in the start of voir dire, was legal argument in the courtroom on two main issues.

First, the defense attorneys are increasingly upset with what they perceive as efforts to bias the jury and to indoctrinate prospective jurors in how to say the “magic words” –those being, “Yes, I can set my biases aside and be fair and impartial, your Honor”–even if they are as far from being fair and impartial as could be imagined. In particular, the defense wanted the crowds outside the courthouse to be moved further back.   Ultimately, Judge Walmsley said he would take the matter under advisement, but I would not expect any real changes here.

Second, the defense attorneys had proposed a half-dozen or so additional questions they wanted to include in voir dire moving forward.  These necessarily have to be offered by the defense, argued against by the prosecutors, and then the judge makes the final call.  Judge Walmsley allowed a couple of new questions, but largely rejected the questions proposed as either being redundant to what was already being asked or on the grounds that the new questions were effectively asking the prospective jurors to pre-judge the case.

Two questions that were allowed were an expansion of the question asking about support of Black Lives Matter to also include support of various “I run with Ahmaud” type efforts, and an entirely new question asking if any prospective juror had an opinion about the time lapse between the shooting death of Arbery on February 23, 2020 and the arrest of the defendants in May 2020.

Once again today’s general voir dire was a four-stage process, with welcoming remarks and a few questions from Judge Walmsley, then extensive questioning by Senior Assistant District Attorney Paul Camarillo (his first time at the podium) asking the substantive questions and Senior ADA Linda Dunikoski running through the witness list, more succinct questioning by Defense Counsel Jason Sheffield, and finally closing remarks and cautions by Judge Walmsley, after which the court transitioned into individual voir dire.

As one would expect, Judge Walmsley’s opening remarks to the prospective jurors today were essentially identical to his remarks from yesterday.

Are any members of this panel related by blood or marriage to any defendant or to Ahmaud Arbery? No responses.

Any prejudice on mind either for or against the accused? No one.

At that point, he handed over general voir dire to the State, in the form of Senor ADA Paul Camarillo (his first time at the podium) and Senior ADA Linda Dunikoski.

Senior ADA Camarillo took just about 40 minutes to work through roughly 80 questions, identical to those asked in previous general voir dire sessions, after which Senior ADA Dunikoski as well as to read through a lengthy list of prospective witnesses to see if any were known to the panel.  Like yesterday, the state had about 80 general voir dire questions for the prospective jurors.

Do you know any of us three prosecutors? No one.

Anybody not reside in Glynn county? No one.

Anyone ever been convicted of felony and not had rights restored? No one.

Anyone sat on grand jury that returned this indictment? No one.

Anyone currently works with law enforcement and is POST certified? 484

Anyone 70 or older and does not wish to serve on this jury? No one.

Full-time caretaker of elderly or handicapped, no other means of care? No one.

Anyone who has difficulty understanding English language? No one.

Anyone who has difficulty hearing? No one.

Expect trial will last through November 19, anyone here who has non-work related conflict, like surgery planned, tickets to vacation preplanned? 495, 489

Anyone related by blood to current Brunswick DA Keith Higgins or any assistant DAs? No one. Know him? 495

Anyone realted by blood or marriage to former DA Jackie Johnson or her ADAs? No one. Know her? No one.

Anyon has opinion about last year DA election where Johnson defeated by Higgins? 495

Anyone have opinion why Cobb County prosecutors are on this case, by GA AG? 495

Anyone be unable to give state fair trial because we are from Cobb County? No one.

Related to Waycross DA George Barnhill? No one. Anybody know him? No one.

Related by blood or marriage to Tom Durden, Atlantic DA? No one.

Know any of the defense attorneys, Sheffield, Rubin? No cards.

Laura and Frank Hough? No one.

Kevin Gough? No one.

Anybody know Judge Walmsley? No one.

Personally know any of the defendants? No one.

Either of you the foreperson? No.

Related to anyone in law enforcement? 488

Ever worked in social work field? 479

Ever work in counseling, psychology, psychiatry, or have background in those fields? 496

Anybody related to or close friend in any DA office anywhere? No one.

Related or close friend who is criminal defense attorney? No one.

Anyone personally know a lawyer in criminal justice field, defense or prosecutor? No one.

Anyone who has had notable bad experience with law enforcement? 498, 475

Anyone here have a good experience with law enforcement? 502, 501

Notable bad experience with prosecutor? No one.

Notable good experience with criminal defense attorney? No one.

You, close friend, relative ever falsely accused of a crime? 495

Ever witnessed violent crime in progress? No one.

Ever take cell phone video of crime in progress? No one.

Anybody ever taken upon yourself to investigate a crime, non-professional capacity? 495

Close friend or relative who has taken upon themselves to investigate a crime? 495

Anybody here ever have to carry a gun for job? 484

Anyone lived in Glynn County for less than 5 years? 484

Anyone live in Royal Oaks neighborhood? No one. Previously? No one. Particularly familiar with? 466

Any religious, moral, ethical conviction prevent you from arriving at verdict? No one.

Private reason can’t make decision on this case? No one.

You, relative, close friend arrested for kidnapping or false imprisonment? No one.

You, relative, close friend, arrested for shooting at someone? 508

Anybody feels unable to follow the law that the court gives you, even if you think the law may or should be different? No one.

Anybody WANT to serve on this jury? 479,

Anyone looked up any court documents on clerk’s website for this case, when you got summons, sent to web site, there were documents there. 481

Anyone served in military? No one.

Anyone here have prior LEO training or experience? 484,

At this point Senior ADA Linda Dunikoski took over for reading the witness list, and asking if anybody needed to raise their hands to earlier questions, retroactively:

474, hardship on a work-related business trip

484, business-related hardship this weekend through Wed of next week.

501, knows one of the possible witnesses’ father

502, arrested as minor, but expunged

ADA  Dunikoski then read through her extensive list of possible witnesses, inquiring as to each if any of the jurors knew any of them.

Having completed her questioning of the prospective jurors, Senior ADA Dunikoski turned the pool over to the defense.

Defense Counsel Jason Sheffield conducted the general voir dire for the defense as a whole (although, technically speaking, he represents only Travis McMichael).

It is notable that Sheffield again introduced Travis McMichael as “former Coast Guard,” without objection from either State prosecutors, nor objection from the court.  Accordingly, I expect this will be done in every general voir dire.

Sheffield’s questioning of the pool took about 15 minutes, asking about 20 questions identical to those he asked yesterday—including a brand new question that had been added following this morning’s pre-voir dire discussion in the courtroom.

Greg McMichael? No one.

Bad feelings about criminal defense attorneys? No one.

Ever voted for candidate because you liked their platform to limit guns? 479

Anyone participated in any demonstrations or marches related to social justice movement, either before or after this shooting? 500

EXPANDED QUESTION:  Anyone supported in any way the Black Lives Matter movement, financial, bumper sticker, yard sign, posting about it online, reposting, including all of the movements about justice for Ahmaud, or I run with 9hmaud, could include “say his name: Ahmaud Arbery,” giving support for hate crime bill legislation? 467, 469, 479, 482, 488, 489, 498, 500, 510

Indicate if you have ever been falsely accused of doing anything based on your ethnicity or race? 498

Do any of you have any medical issues or any physical, visual, hearing, that would cause you to lose focus or concentration during the trial, absent a morning, lunch, afternoon break, that would impair your ability to stay focused on trial? 469, 498, 508

After the defense had worked through its questions, the proceedings were returned to Judge Walmsley.

Judge Walmsley informed the prospective jurors that they’d take a short recess and then transition into individual voir dire in which they would be questioned separately to follow up on these and other questions.

He cautioned them that until he instructs them otherwise that they were not to discuss the case amongst themselves or others, not to search out information about the case, not visit the neighborhoods involved, none of that.  Further, if anyone approaches them about the case, or is discussing the case within their hearing, they are to notify the court.

And with that the court recessed, to come back into session a short time later with individual voir dire.

As noted, individual voir dire is broadcast without sound, so that broadcast is of little use for purposes of analysis.

Presumably, local journalists will be reporting the bare facts such as how many jurors were dismissed and how many were seated, and we’ll share that information with all of you as it comes our way.

OK, folks, that’s all I have for you on these jury selection proceedings today.