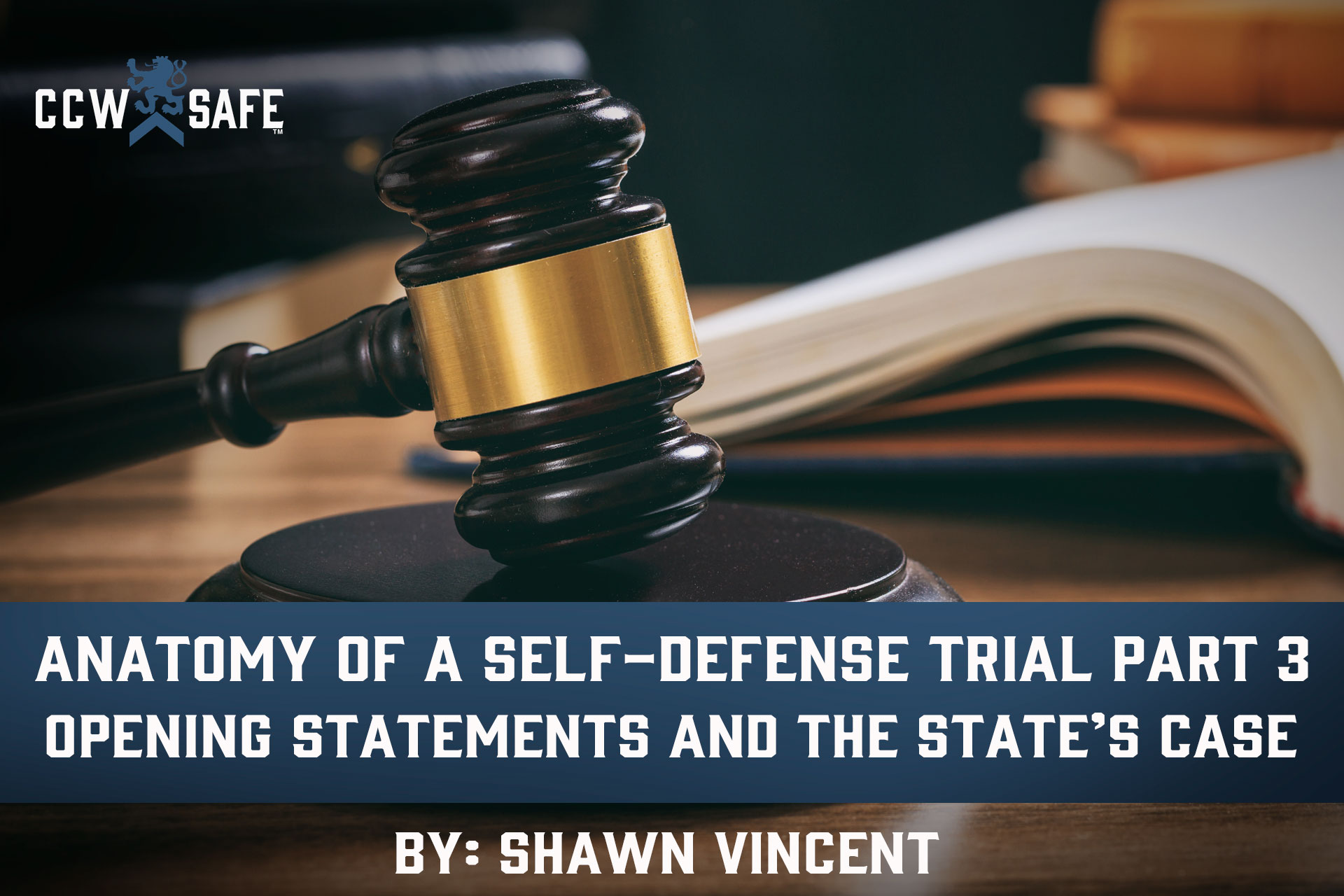 Posted on November 22, 2019 by Shawn Vincent in In Self Defense

Anatomy of a Self-Defense Trial Part 3

Anatomy of a Self-Defense Trial Part 3

Opening Statements and the State’s Case

Over the last couple weeks, I’ve been using the Michael Drejka trial as a vehicle to explore all the different phases of a self-defense trial. You may remember the Drejka case as the parking lot shooting; Michael Drejka shot Markis McGlockton after McGlockton violently shoved him to the ground to breakup a heated verbal dispute over a disabled parking spot.  Don West, National Trial Counsel for CCW Safe watched most of the trial on CourtTV. I tuned in when I could, and we traded texts about the key points of trial. Don thought our discussions about the case would provide a good framework for talking about the phases of trial for people who have never been through or witnessed a criminal trial from start to finish.

Last week we discussed jury selection, and the week before we examined the importance of pre-trial hearings. This week, we’ll look at what happens on the first real day of trial, from opening statements to the presentation of the state’s witnesses.  Full disclosure, I volunteered pro-bono to help qualify the jury in the Drejka case with the understanding from Drejka’s lawyers that I’d be writing about the case for CCW Safe.

For important cases, like a homicide case, it often takes a full day or longer to pick a jury. If the parties agree on a jury near the end of the day, it’s likely the judge will set opening statements for the next morning. However, if jury selection is complete in the middle of the day, as was the case in the Drejka case (the middle of the third day), then the judge may decide to take a recess and begin openings shortly there after. It’s an extraordinary time in a criminal case because the trial team immediately shifts all of their efforts from selecting a jury to preparing for opening statements.

The prosecution puts on their case first, and for good reason; it is their task to prove the crime beyond a reasonable doubt. They have the burden, and therefore it’s up to them to make their case. If the defense team feels the prosecution failed to meet their burden, they have no obligation to respond, and for this reason, the prosecutors always go first.

Don West says that opening statements are optional, but for the prosecution especially, it’s almost always done. “The goal there,” Don says, “is to give the jurors a preview of the evidence, and to some limited degree, touch upon some of the legal framework of the case.” It is not a chance to argue the case — that’s what closing arguments are for. Opening statements are more of a “road map,” Don says, that helps a jury understand where a case is going to go.

Opening statements can last a few minutes or an hour or more. Often, a judge will set a time limit for openings. That seems to be the case in the Drejka trial, as both the state and the defense kept their openings to about 30 minutes.

The defense isn’t required to respond with an opening statement, or they can wait until the state rests to give their opening, but Don West says that’s rare in a self-defense case. Because a self-defense case relies on the accused’s belief that he acted justifiably, Don says, “I think you have to get that out there right up front and explain in detail why that’s the case.”

The state’s arguments can last several hours or several days. In the Drejka case, the prosecution’s case lasted just under two days. By comparison, in the George Zimmerman case, the state took about eight days to make their case.

Once the state has called all their witnesses and introduced all their evidence, they will rest their case. This creates a unique opportunity for the defense to ask the judge for a judgement of acquittal. Essentially, if the defense attorney feels that the state failed to meet their burden, the defense can argue that there’s no need for the defendant to present a case, and there’s no reason to send the case to a jury. Defense attorneys almost always make this argument, and judges almost always deny it — but not without exception. Don West told me he’s had judgements of acquittal granted if full for clients, and he’s had certain charges dismissed at this phase, thereby lowering the stakes for the rest of the trial. While judgments of acquittal are not frequently granted, they can stop unsubstantiated prosecutions from going all the way to a jury.

In the Drejka case, arguments for judgment of acquittal must have been short, and CourtTV seemed so sure the judge would deny the defense motion that they cut to talking head commentary during this phase, and hurried back to the defense case-in-chief without a mention of judgement of acquittal.

If and when the judge denies judgment of acquittal, it becomes the defense’s turn to present a case — if they decide to do so. That’s where we’ll pick up next week.

The lesson for concealed carriers is that, while it may take months or years of waiting in agonizing uncertainty to get to trial, once a trial actually begins, it goes by quickly. Some of the most high-profile cases — O.J. Simpson, Casey Anthony, George Zimmerman — lasted for weeks. Most trials, however, last only a few days. That’s all it takes to lay out the evidence that a jury will use to reach a verdict that will affect the rest of your life.