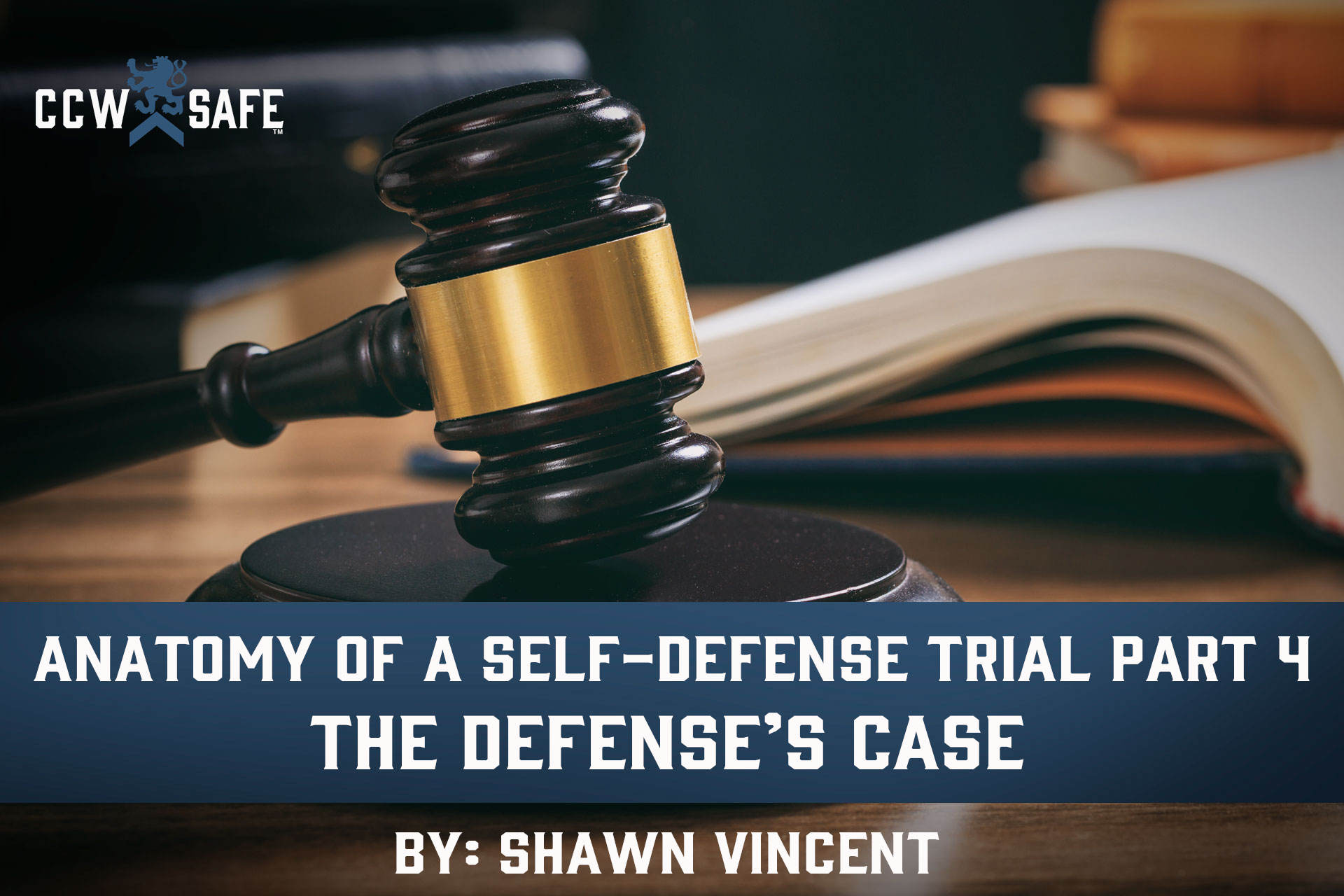 Posted on November 29, 2019 by Shawn Vincent in In Self Defense

Anatomy of a Self-Defense Trial Part 4

Anatomy of a Self-Defense Trial Part 4

As the trial of Michel Drejka played out in a crowded Florida courtroom, it also streamed live on CourtTV.com. That’s where Don West, National Trial Counsel for CCW Safe, watched much of the proceedings. That’s where I watched too, and we called and texted each other throughout, commenting and criticizing. We agreed that, for those who have never seen a trial from beginning to end, the Drejka case provided a fine example, offering an opportunity to explore the phases of trial for the benefit of those who might not be familiar with the process. You might know this case as the parking lot shooter case, where Michael Drejka shot Markis McGlockton after McGlockton violently shoved him to the ground to end a heated verbal argument over a disabled parking spot.

Over the last three weeks, we’ve discussed pre-trial hearings, jury selection, opening statements and the presentation of the prosecution’s case. This week, it’s time to talk about the defense’s presentation.

It’s important to understand that in a criminal trial, the defense has no obligation to present a case. The prosecution must prove beyond a reasonable doubt that the accused’s use of force was not justified in self-defense. If the defense feels confident that the state failed to meet that burden, they can simply rest without making a presentation. This is relatively uncommon in criminal defense cases, but certainly not unheard of.

Moreover, defense lawyers do much of the heavy lifting during cross examination of the prosecution’s witnesses. If they’ve done a good job during that phase of trial, there might not be much work left during the defense’s case-in-chief. Don West says, “I’ve been involved in cases where we had 30 or 40 potential witnesses that we could call, and for reasons that were developed during the trial, we pared that down to half a dozen.”

In the Drejka case, the defense presented only four witnesses. One was Dr. Daniel Buffington, offered as an expert who refuted the state’s witness who spoke about the effects of the drug MDMA in McGlockton’s system. One was a forensic psychologist meant to explain how people’s perceptions change when they are attacked, and two were use of force experts asked to explain some of the terminology that Drejka used in his police interview, such as the 21-foot-rule and “force multiplier.” Most notable is who was not called to testify during the defense’s case: Michael Drejka himself.

The state cannot call the accused to testify at trial — that’s the Fifth Amendment at play. Don West says, “The only time in a criminal defense trial that the defendant would testify would be during the defense presentation, and only if the defendant chooses to do so.” The decision as to whether to put a defendant on the stand is risky because it gives the prosecution the opportunity to cross-examine the accused and try to undermine his credibility.

That said, in a self-defense case, it’s critical that the jury believes the defendant perceived an imminent threat of death or great bodily harm when he chose to use deadly force. It’s difficult to make this claim without it coming directly from the accused’s lips.

Ultimately, in the Michael Drejka case, the defense attorney’s chose not to put their client on the stand. Very likely, they may have felt that recorded statements Drejka made to the police — which the prosecutors played for the jury — were enough to establish Drejka’s claim without the risk of a brutal cross-examination.

Self-defense cases are tricky because, intuitively, it feels like the accused must prove that he acted in self-defense. Thankfully, that’s not the standard. The prosecutor must prove beyond a reasonable doubt that the use of deadly force was not self-defense. Perhaps the defense attorney’s biggest job in a self-defense case is making sure the prosecutors don’t shift their burden. Don West says, “It’s critically important for the jury to know whose job it is to prove the case.” This becomes a key aspect of the closing arguments, which we’ll explore next week.

The lesson for the concealed carrier is that if you’re going to be convicted for a self-defense shooting, a prosecutor will need to prove beyond a reasonable doubt that you did not act in self-defense. The problem is that it is a complicated, counter-intuitive standard, and it takes a savvy defense team to keep the prosecutors from shifting the burden in the eyes of the jury. It also means that to assert a believable self-defense claim, the defendant may have to take the stand so the jury can hear from the shooter himself — and then he must withstand the prosecutor’s best attempt to dispute the claim and undermine his credibility. It’s a risky, high-stakes proposition, and that’s just one of the reasons we urge concealed carriers to always avoid physical confrontations whenever possible.