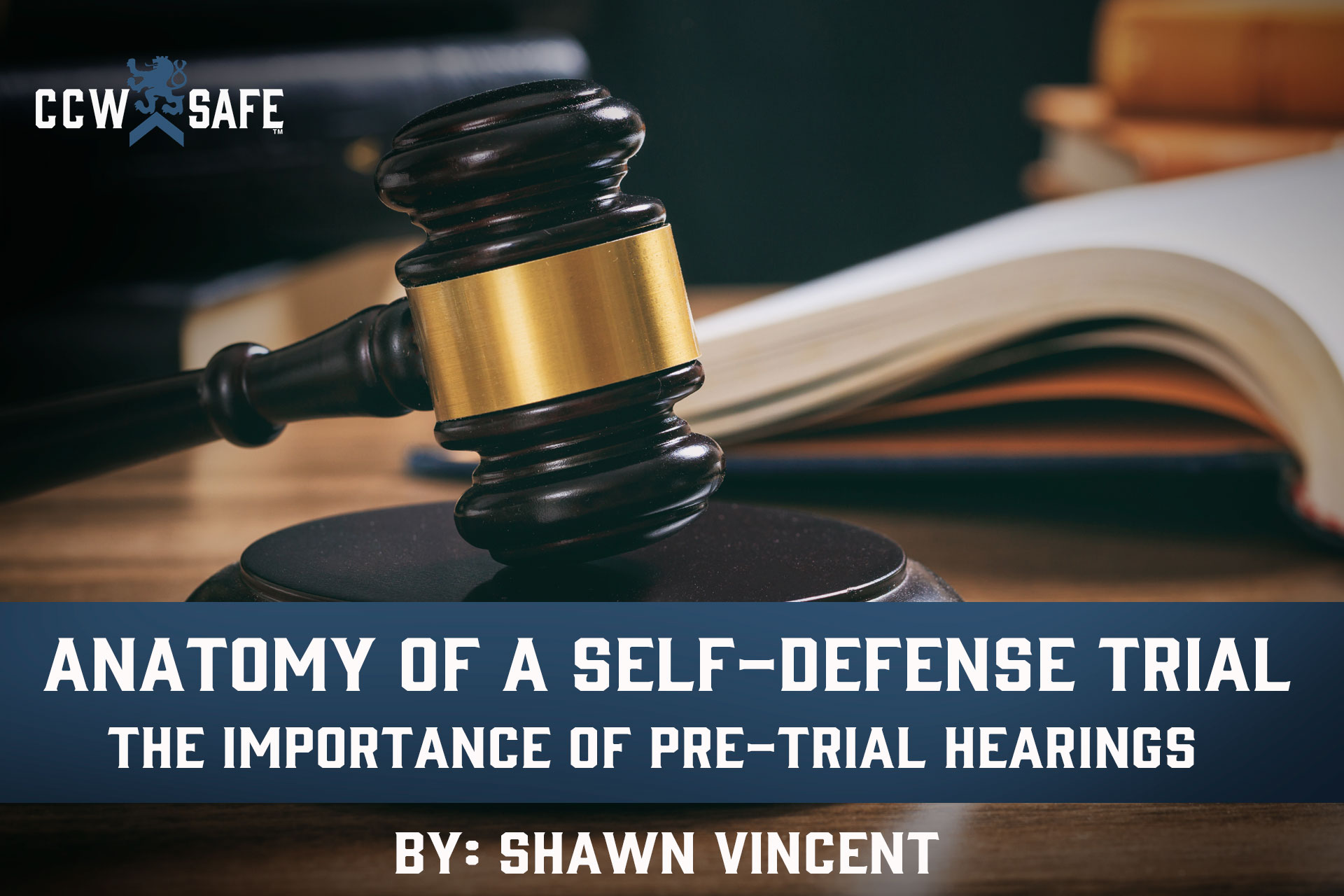 Posted on November 8, 2019 by Shawn Vincent in In Self Defense

Anatomy of a Self-Defense Trial

Anatomy of a Self-Defense Trial

The importance of Pre-Trial Hearings

Back in August, Michael Drejka stood trial for the shooting death of Markis McGlockton. CourtTv called it the Parking Lot Rage Killing (that title may give you some idea which way the coverage leaned). It’s the case where Michael Drejka argued with Brittnay Jacobs over parking in a disabled parking spot. McGlockton, Brittney’s life partner, saw the verbal spat, rushed to her defense, pushed Drejka to the ground, and Drejka shot him, fearing the attack would continue.

Drejka couldn’t afford counsel, so his attorney’s worked pro-bono. Full disclosure, I offered to help qualify the jury, so I had a very limited role in the case. I wasn’t privy to any of the defense strategy, and I let the lawyers know I had been writing about the case, and that I’d continue to do so.

Don West and I had been following the case pretrial — Don is National Trial Counsel for CCW Safe — and when we found out CourtTV would be streaming the trial, we made plans to watch it from our respective home offices. We texted like school children throughout the testimony, armchair quarterbacking the entire proceeding

Recently, I sat down with Don to record a podcast about the case, and it occurred to us that the Drejka trial provided a great opportunity to describe the anatomy of a trial for folks who haven’t seen the process from beginning to end. To tell the story of this trial, we decided to start at the beginning — or before the beginning, to be precise.

In the weeks leading up to the trial, there were a number of pretrial hearings designed to determine what testimony jurors could hear at trial, what evidence jurors could see. Don West explains that most of these arguments come in the form of motions in limine — motions to limit certain types of evidence. Often the judge’s decisions on these motions can drastically shape how trial will unfold.

Case in point, the shooting of Markis McGlockton was captured by the convenience store’s security cameras. The same security system also captured McGlockton stumbling back into the store, clutching his chest as he fell to the floor and died at the feet of his five-year-old son. The prosecutors wanted that last bit in; the defense vehemently objected, saying that dramatic image had nothing to do with Drejka’s decision to fire in self-defense, and it would simply play upon the heartstrings of the jury. As Don West explains, the defense argued that the prejudicial nature of the evidence outweighed the probative benefit. The judge agreed with Drejka’s lawyers, and the jury wouldn’t see the footage of McGlockton dying in front of his child.

Not all the rulings went the defendant’s way, however. Month’s before the shooting, Drejka had a similar incident with a truck driver who parked in the same disabled parking spot that sparked the fight with McGlockton. In this previous encounter, Drejka yelled at a septic truck driver, exposed his weapon, yelled a racial epithet, and called the “how’s my driving” number on the vehicle to tell the man’s boss that his employee was lucky he didn’t get his head blown off. It’s what lawyers call a “bad fact.” Defense lawyers fought like hell to keep it out of trial, arguing again that it was prejudicial, but the judge sided with the prosecutors on this one.

Don West says there is good basis for the judge’s decision. There are laws designed to prevent prosecutors from digging up “prior bad acts” to besmirch the character of a defendant. The idea is that a prior conviction on, say,  fraud doesn’t offer any insight in the case of a person standing accused of a charge such as assault. One has nothing to do with the other. The prejudicial effect outweighs the probative value. Except, in Drejka’s case, the prior bad act was so similar to events that led to the shooting of McGlockton, the judge determined that a jury should be allowed to consider it. He decided it was relevant to the case. It was a serious blow for the defense, and it may have proven insurmountable at trial.

Sometimes these pretrial motions can be handled with some simple motion writing and oral argument, but other times they can take much more work. In the George Zimmerman case, Don West had to challenge voice experts offered by the state that planned to testify the screams on the 911 recording belonged to Trayvon Martin. West challenged the science used by the experts in an evidentiary hearing called a Frye Hearing. It required tendering his own experts, and an untold number of hours went into preparation. Those hearings alone took longer than the entire Drejka trial. Ultimately, the judge ruled in favor of the defense, Had the jury heard that evidence, it could have drastically altered the outcome of the trial.

I’ve written about the Michael Strebendt case where the vetran Marine sniper and professional mixed-martial artist shot an aggressive motorist after a collision on a dark highway. Strebendt had a pretty strong case; he was on the phone with 911 when the shooting occurred, and he could be heard begging the aggressor to back away. The man got close enough to put his hands on Strebendt’s rifle before the defender fired one shot. Nonetheless, Strebendt had the same problem Drejka had: prior bad acts. Except Strebendt had way more of them. His lawyer Mike Arnold called them a “parade of horribles,” and like Drejka’s lawyers, Arnold fought like hell to keep the evidence out of trial. He believed acquittal would be practically impossible if they came in.

In his book about the case, Arnold says he had to work up each bad act like it was it’s own mini-case. Some of the issues required consulting experts. Eventually, he argued each issue in a marathon hearing that lasted for days. It was like a whole trial before the jury trial. When Arnold was finished, the judge decided to reserve ruling for a later date, and the resolution of the must-win hearing was delayed indefinitely. Meanwhile, Strebendt was in jail without bond awaiting trial. Ultimately, he struck a deal, pled to a lesser charge, and served out a couple more years in order to avoid the uncertainty of the prosecution. For Strebendt, the pretrial evidentiary hearing was the closest he’d come to a trial.

Don West says that sometimes clients shake their heads when they hear a case could take a year or two — or more — to get to trial. He says they say, “What are you guys doing all the time. Playing golf?” For the record, I’ve never seen Don play golf. Notwithstanding, Don says, “Just touching on some of these evidentiary issues, the consultation with experts, the investigation, the assessment and strategy, and then ultimately getting it into the court prior to the trial even starting — getting all this sorted out takes a lot of time. It can be a full time job for almost a year.”

The lesson for the concealed carrier is that it’s difficult to imagine the gargantuan amount of work it takes to properly prepare a case for trial. Just the pretrial work is a “full time job for almost a year.” Pulling the trigger takes less than a second. Defending a self-defense claim takes hundreds or thousands of hours. It’s just one of the reasons we stress that, if there is anyway to avoid using deadly force in a potential self-defense scenario, you absolutely should.