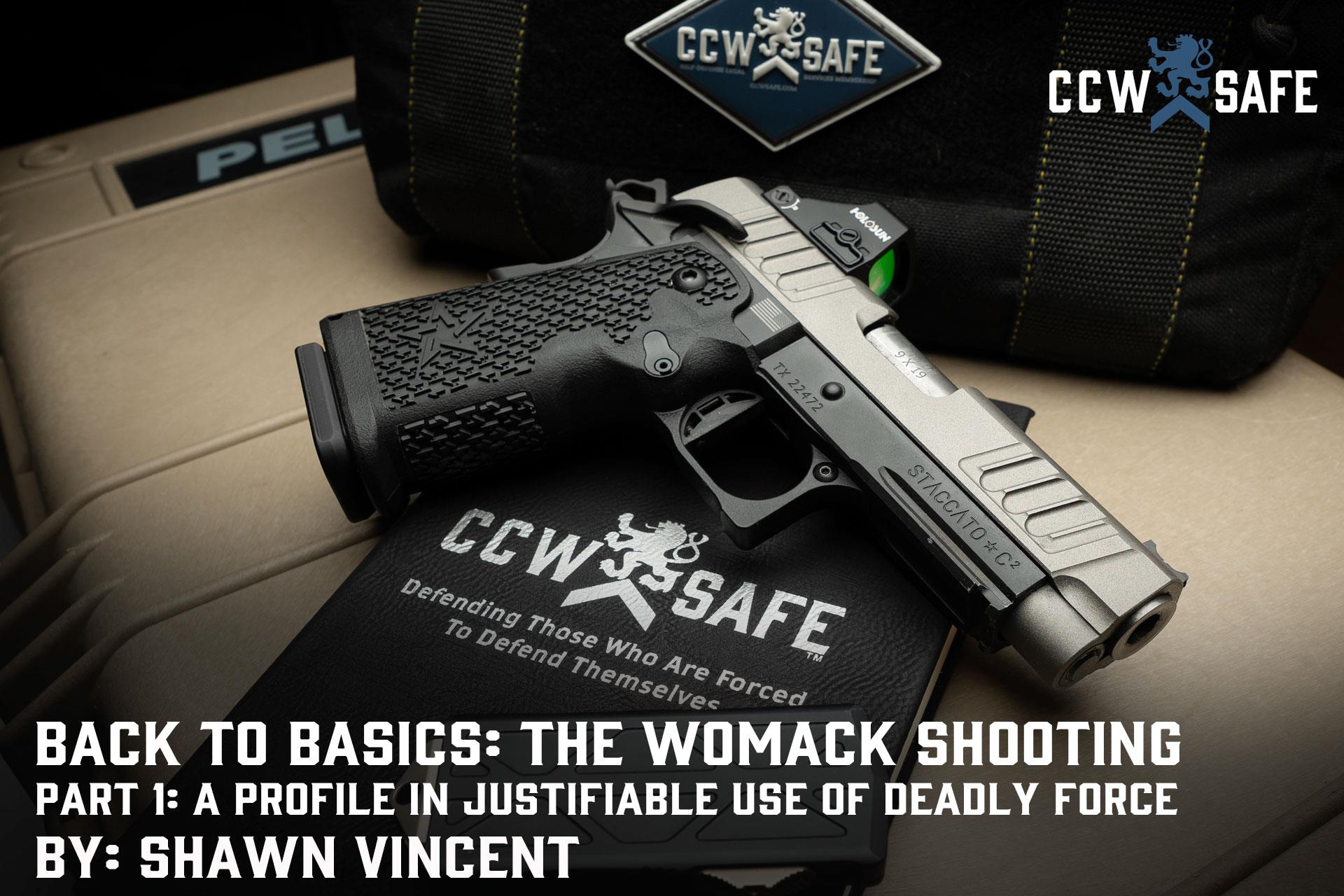 Posted on February 12, 2021 by Shawn Vincent in In Self Defense

Back to Basics: The Womack Shooting Part 1

Part 1: A profile in justifiable use of deadly force

So many of the high-profile self-defense cases we explore are controversial cases where the defender made errors that scuttled their legal defense for using deadly force. The Womack shooting is not one of them. The unnamed defender in the Womack shooting, legally, did everything right, and when the District Attorney announced publicly why he wouldn’t be pressing charges, he checked all the boxes that we frequently identify as the fundamental elements of self-defense. Because the shooter was innocent, the prosecutor didn’t reveal his name. We’ll refer to him as The Defender.

We first wrote about this case early last year, but as part of our Back to Basics series, we’re revisiting our touchstone cases, focusing on the fundamental legal aspects with input from CCW Safe National Trial Counsel Don West, and with tactical considerations from firearms instructor and CCW Safe contributor Steve Moses.

On the evening of February 28, 2020, Alan Womack Jr. went to the King of Prussia LA Fitness for a game of pick-up basketball. The Defender played on the opposite team, and Womack accused him of committing a “traveling” foul. An argument ensued, and according to reports, Womack ultimately threatened to shoot The Defender in the head.  The Defender decided to leave the game, but by the time he actually left the gym, Womack was waiting for him outside. While The Defender walked to his car, Womack followed, shouting threats and obscenities. In the final moments, as Womack closed on The Defender, he drew a Taurus pistol and racked a round.  The Defender, a licenced concealed carrier, pulled a Glock 9mm pistol from his gym bag and shot Womack once in the chest. As he fell, Womack fired two wild rounds that struck nearby vehicles but harmed no one. Womack died before paramedics arrived.

There is no doubt about who shot and killed Womack, so the legal issue to be analyzed is whether this was a justifiable killing. To be justified in his shooting of Womack, the shooter had to be in reasonable fear of death or serious bodily injury. Evidence that would support a reasonable fear would include Womack’s threatening words, his waiting outside of LA Fitness and following him through the parking lot, threatening him again, pulling out a gun, and racking a bullet into the chamber while approaching the other man.

The fundamental elements for a justifiable self-defense claim require the defender to have a reasonable fear of an imminent threat severe enough to cause great bodily harm or death. The elements we focus on are “reasonable fear,” “imminence,” and “severity.”

Don West says, “There’s no question that The Defender saw Womack with the gun, in a clearly agitated state, having racked the gun, ready to fire it. The Defender clearly had a reasonable fear of imminent great bodily harm or death.” He checked all the boxes.

In a practical sense, the concept of “reasonable fear” means that the perceived attacker’s hostile intentions need to be clear. Don says a mere verbal threat of the use of deadly force is seldom enough to justify the use of force. That means Womack’s threat in the gym — that he would shoot The Defender in the head — wasn’t enough on its own to justify a physical response. It may have very well been trash talk gone too far. However, with that threat as context, when Womack later pulled a pistol and racked it, the Defender had plenty of reason to believe Womack’s intentions were hostile.

Imminence, from a legal perspective, is pretty hard to specify, Don admits. It is contingent on circumstances. “If somebody is 50 yards away and they don’t have a weapon, they can’t actually hurt you at that point.” That means that while Womack was pursuing the Defender out of the gym — before he drew the pistol — the threat of violence may have been impending, but it was not yet imminent. Once, Womack produced the pistol and racked it, the deadly threat became imminent. As Don told me, “Nothing says ‘I’m ready to shoot you’ like somebody racking a semi-automatic handgun within a few feet of you.”

A loaded firearm always has the ability to cause great bodily harm or death, so when Womack introduced the gun, the severity of the threat was clear. But in the moments before Womack drew the pistol, the Defender was in a difficult position: he was about to be attacked by an apparently unarmed man. Had he drawn his Glock and fired at this point, he would have to articulate why he felt Womack, seemingly unarmed, posed a physical threat severe enough to cause great bodily harm or death. By all counts, both men were in good physical shape. It would have made this case a lot more difficult for The Defender to justify.

This difficult-to-navigate gray area where an armed defender faces an apparently unarmed attacker is something we call the “defender’s dilemma.” In our next article, Steve Moses suggests some tactics the Defender could have used to address the impending threat before Womack produced his pistol.

In the meantime, the lesson in the Womack shooting for concealed carriers is that all three legal elements of self-defense — reasonable fear, imminence, and severity — have to be in place before you are justified in deploying deadly force. You have to have a reasonable fear that the attacker intends to hurt or kill you. The attacker has to have the ability to inflict an attack severe enough to cause great bodily harm or death. And the threat must be imminent, which means it is practically about to happen. As the Womack shooting demonstrates, the window where deadly force is justified can be precariously small. Acting too soon can lead to legal calamity. Acting too late can lead to death.