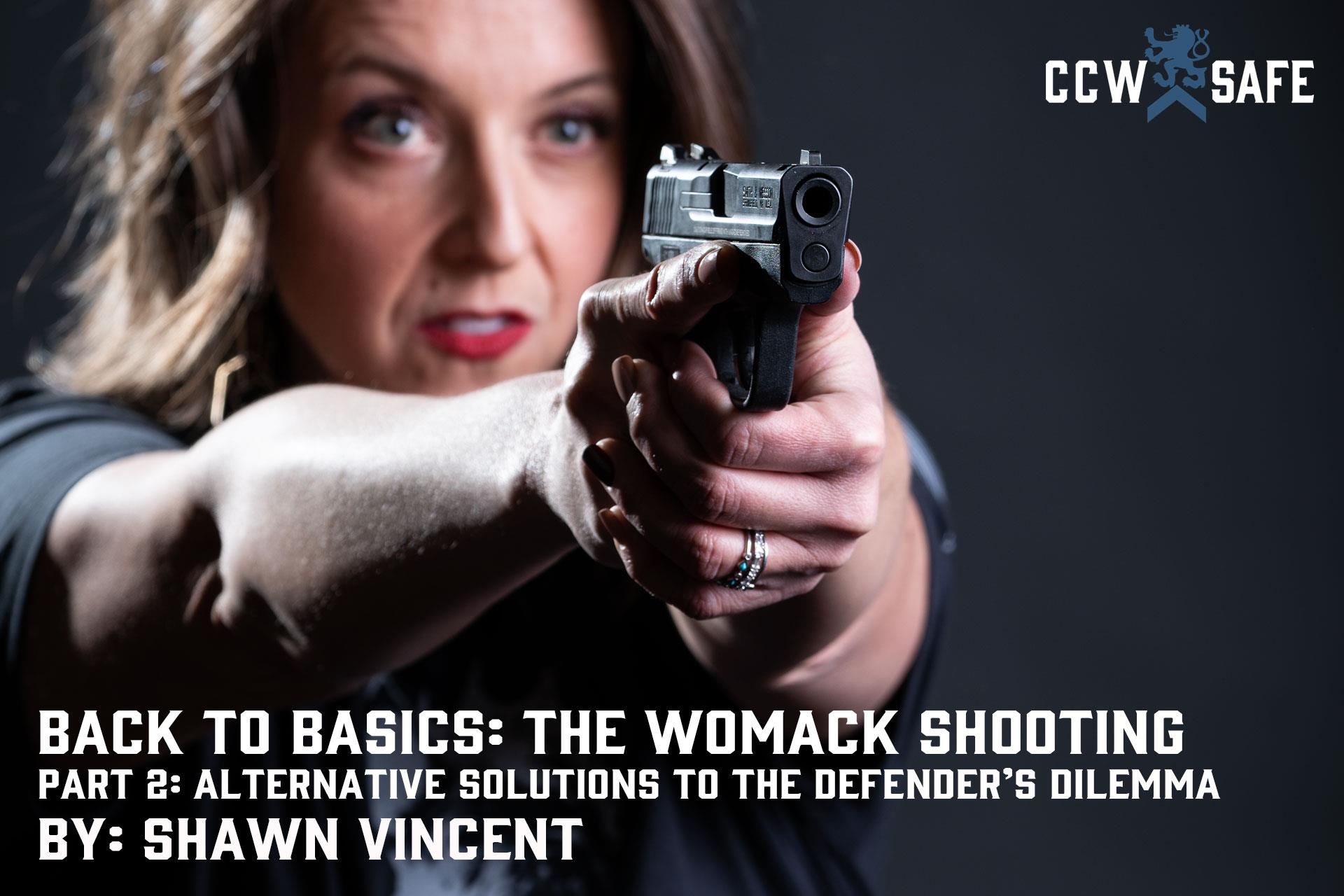 Posted on February 19, 2021 by Shawn Vincent in In Self Defense

Back to Basics: The Womack Shooting Part 2

A man goes to the gym to join a game of pick-up basketball. During the game, he fouls a few times. “Traveling.”  A player on the other team gets angry, starts an argument, and eventually threatens that he’s going to shoot the man in the head. The man decides the fight’s not worth it; he grabs his gear and leaves the game, but the other player, still fuming, decides to wait for the man outside the gym. When the man leaves, the other player follows him through the parking lot, shouting obscenities and making more threats. The other player closes quickly. The man is a licensed concealed carrier. He has a loaded pistol in his gym bag. He begins to think he might need to use it, but the other player is unarmed. Or is he?

This is the defender’s dilemma: when an armed defender is faced with a seemingly unarmed attacker. The scenario described above is torn from the headlines. The other player was 28-year-old Alan Womack. The man was found justified in the shooting so the district attorney declined to release his name. We’ll refer to him as The Defender.

In this case, The Defender kept walking away from his attacker until Womack closed the distance, produced a pistol and racked a round into the chamber. The Defender responded by drawing his firearm and firing a single, fatal shot. As Womack fell to the ground, he fired two wild shots that struck nearby cars but injured no one.

After a three-and-a-half-week investigation, the district attorney issued a statement explaining why the shooter would be facing no charges in the homicide that had captured local headlines. The Defender was declared justified.

Firearms instructor and CCW Safe contributor Steve Moses agrees that the Womack shooting was completely justified. However, despite The Defender’s ultimate exoneration, he still endured weeks of uncertainty while police investigated the shooting. And the death of Womack, who was an accomplished athlete with no serious criminal history (he was a licenced concealed carrier himself), is a tragedy — despite his instigating this deadly encounter. Although The Defender benefited from the proper legal conclusion in the case, the better resolution would have been if the shooting could have been avoided in the first place.

Steve offered three scenarios where The Defender could have (speculatively) made different decisions that may have led to different results. Steve emphasized that these are not criticisms of someone who acted decisively in a terrifying life-or-death situation; rather these are opportunities for concealed carriers to learn with the benefit of 20/20 hindsight.

The first opportunity came early when Womack first initiated an argument with The Defender over “traveling” fouls in the gymnasium. Steve says concealed carriers are wise to avoid verbal sparring. “A guy wants to argue with you, don’t argue. If you decide you need to get away, doing so in a manner where no disparaging comments are made as you leave is advised. That’s an opportunity to de-escalate and disengage at the same time.”

My read on this is that, as a concealed carrier, sometimes you have to throw a bone to a jerk so you can avoid having to shoot him later. Right or wrong, an apology designed to allow a hot-head to save face in front of his friends can go a long way towards preventing an unnecessary tragedy.

The second opportunity to avoid the deadly confrontation came as The Defender left the building. Steve says, “If I’d stepped outside that door and I had seen Womack over there waiting for me, then the next thing to do would be turn around and go back inside.” From a tactical standpoint, staying inside where it was well-lighted and there were more people around may have given Womack time to simmer down. Moreover, Womack would be less likely to pull his gun in the crowded lobby than in a darkened parking lot.

Steve says that maintaining this kind of situational awareness is a good idea whether you’ve just had an argument with someone or not. If there’s a suspicious or threatening-looking character between you and your destination, taking a different route or waiting for the potential threat to move on could avoid unnecessary conflict.

Finally, we know from witness accounts that Womack followed The Defender into the parking lot shouting obscenities and making threats. With the context of the threat made in the gym, The Defender had reason to believe that Womack intended him harm — even before the attacker closed the distance and drew his pistol. Steve says there may have been an opportunity for The Defender to engage Womack earlier, when there was still some distance between the two, and to issue a stern verbal warning like “STAY BACK” and to potentially introduce his own firearm by making a defensive display.

Don West, criminal defense lawyer and National Trial Counsel for CCW Safe agrees. Although there is substantial legal risk associated with displaying a firearm, defensive display is a viable less-lethal use of force option, in some cases, for dealing with aggressors when they are unarmed or appear unarmed. Had The Defender fired at Womack before the attacker drew his pistol, it would have been significantly more challenging to legally justify his use of deadly force. However, considering Womack’s apparent physical capabilities combined with the intimidating language (including the threat that he would shoot The Defender in the head), there was likely enough evidence to make a case that Womack, even without a pistol in his hand, posed an imminent threat of great bodily harm, which could meet the legal requirements for justifying a defensive display.

The lesson for concealed carriers is that there are almost always multiple options open to a defender during a potential self-defense scenario, but it takes some foresight to recognize potential threats early and to imagine alternative resolutions such as de-escalation, disengagement, and less-lethal options — including defensive display.