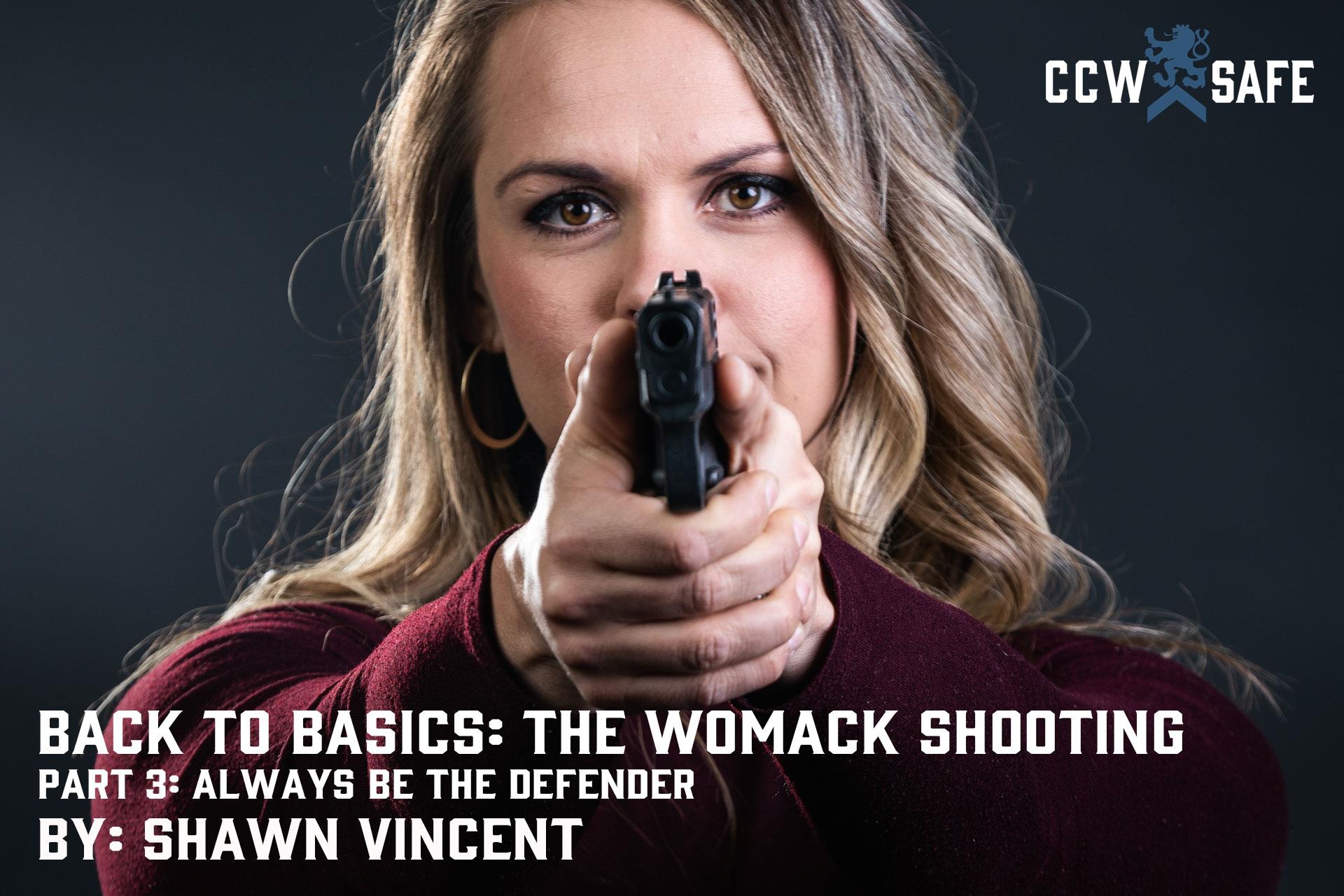 Posted on February 26, 2021 by Shawn Vincent in In Self Defense

Back to Basics: The Womack Shooting Part 3

Part 3: Always be the defender

Montgomery County District Attorney Kevin Steele publicly announced that the February 28, 2020 shooting of Alan Womac Jr. was justified. The innocent shooter, who the DA declined to name (we’ll call him The Defender) was in reasonable fear of death or serious injury. According to Steele, “Evidence that would support a reasonable fear would include Womack’s threatening words, his waiting outside of the LA Fitness and following him through the parking lot, threatening him again, pulling out a gun, and racking a bullet into the chamber while approaching the other man.”

The conflict had started earlier in the evening when Womack got angry at The Defender for “traveling” fouls, and he threatened to shoot The Defender in the head. In response, The Defender packed up his gear and left the game, but by the time he finally exited the fitness club, Womack was waiting for him at the front door. The rest went down as the district attorney described.

The Defender met the primary legal requirements for justifying the use of deadly force: he had reasonable fear of the imminent threat of great bodily harm or death. Reasonable fear, imminence, and severity. He checked all the boxes.

The district attorney went even further, however, in supporting his decision not to file charges. “At no point in the encounter,” he said, “did the evidence reveal that the shooter provoked the decedent or raised the level of force. If he had, the self-defense claim would be invalidated. In fact, the shooter did just the opposite, trying several times to de-escalate the situation.”

In addition to the primary legal elements of self-defense (reasonable fear, imminence, severity), we’ve also identified some elements that form the preamble to a justifiable use of force claim. A defender must be in a place where they have a legal right to be; they must not be breaking the law; they must not be the initial aggressor; and in some places, they have a legal duty to retreat. That’s location, lawfulness, initial aggressor, and duty to retreat.

As a licensed concealed carrier and a member of the King of Prussia LA Fitness, The Defender in the Womack shooting was unquestionably in a location where he belonged, and he was not breaking the law. Both these boxes are checked in favor of The Defender.

Regarding who was the initial aggressor, witness accounts suggest Womack started the argument. Womack made the first threats, and Womack waited for and pursued The Defender into the parking lot. As the district attorney indicated, had The Defender picked the fight with Womack, or if he had issued the first threats in the gym, the ultimate deadly encounter in the parking lot would have been viewed through a different lens.

CCW Safe National Trial Counsel Don West says, “I think the threat inside the gym becomes really important here. You aren’t the initial aggressor just because you are angry or just because you argue with somebody. When it escalates to the point of a threat and the threat is a serious one, then you’ve taken an argument and put it in the context of a crime.”

It’s also interesting that the prosecutor specifically noted that The Defender did nothing that “provoked the decedent or raised the level of force.” Don West says that provocation is a way to lose your right to self-defense. “Provocation,” Don says, “basically means that you are baiting the person, trying to get them to throw the first punch or to become the legal aggressor so that you then believe you have the right to defend yourself against it.”

We’ve seen this play out in other cases. In the trial of Michael Drejka, prosecutors presented evidence that Drejka had a history of picking fights with people for parking in handicaped spaces. They even presented testimony that showed Drejka had threatened to shoot someone over such a violation in the past. When he started an argument with Markis McGlockton’s girlfriend, and McGlockton violently shoved Drejka to the ground, Drejka fired a single fatal shot in self-defense. Although it appeared McGlockton was the actual initial aggressor, evidence showed that Drejka had a history of baiting people into fights — perhaps hoping for the opportunity to use his gun. A jury convicted Drejka of manslaughter.

The district attorney in the Womack shooting emphasized that rather than provoking Womack, “the shooter did just the opposite, trying several times to de-escalate the situation.” The de-escalation efforts included quitting the basketball game after Womack’s death threat and retreating through the parking lot as Womack pursued.

Don West notes that Pennsylvania, where the shooting occurred, is a stand-your-ground state. That means The Defender’s duty to retreat from a potential threat is legally waived. But just because a defender may not have the legal duty to retreat, it doesn’t mean that making the effort to walk away doesn’t offer legal advantages. Clearly, The Defender’s repeated efforts to disengage helped the district attorney articulate to his constituents why he wasn’t going to file charges.

“He was always the defender, from the beginning and until the end,” Don says. “Right until he believed that he had no choice but to use deadly force in response to a deadly force threat.”

The Womack shooting highlights that, while a defender can meet all the primary legal elements for the use of force (reasonable fear, imminence, severity), a violation of the preamble requirements of location, lawfulness, initial aggressor, and duty to retreat can potentially ruin a self-defense claim. Conversely, meeting these preamble requirements can serve to strengthen a claim.

The lesson for concealed carriers is that you should never be the one who provokes a confrontation. Even if you live in a stand-your-ground state, if you make every effort to de-escalate, and if you assume a moral duty to retreat, it will serve to reinforce your self-defense claim should you ever be forced to use your firearm. A concealed carrier should always be the defender, from the beginning until the very end.