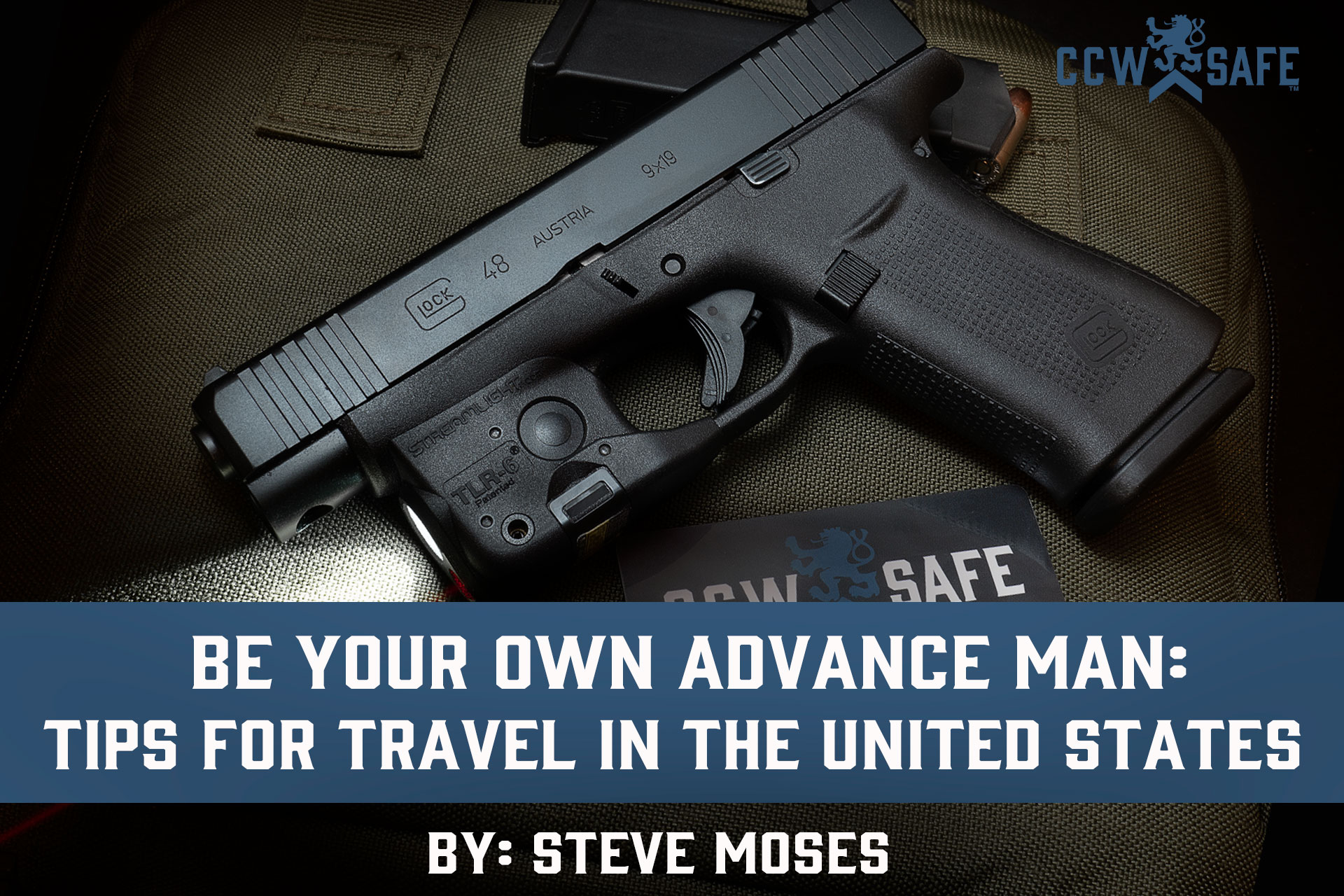 Posted on October 7, 2019 by Steven Moses in Training

BE YOUR OWN ADVANCE MAN: TIPS FOR TRAVEL IN THE UNITED STATES

BE YOUR OWN ADVANCE MAN:

TIPS FOR TRAVEL IN THE UNITED STATES

Greg Shaffer is the president of Shaffer Security Group, a security consulting and risk management firm located in Irving, Texas and author of the book Stay Safe. Greg is recognized as a leading expert on active shooter and domestic terrorism matters and can frequently be seen on Fox News and other national media outlets. Shaffer spent twenty years in the FBI, including six on the FBI Hostage Rescue Team and has operated in the United States, Iraq, Kenya, Pakistan, Philippines, Indonesia, Yemen, and a number of other foreign countries.

Shaffer Security Group conducts Executive and Dignitary Protection service on an ongoing basis for senior members of the United States government, high-profile public figures, and corporate executives. They have also trained international security details assigned to their Head-of-State.  Their company specializes in consulting with clients and training their security departments in better ways to prepare for and manage ever-changing security needs.

Executive and Dignitary Protection is not nearly as sexy as movies and television would suggest. The last thing a professional personal protection officer wants to do is take physical action in order to protect his or her client, and many would consider this to be a possible failure on their part to anticipate such an action and prevent it from occurring.

One of the big secrets to traveling with a client is to assign an “advance man” who is required to proceed ahead of the client’s security detail (note: one of my good buddies who can do advance work is a female). The advance man will make sure that all appropriate steps regarding air travel, rental cars, and hotel reservations have been taken. The advance man will perform a threat assessment looking for specific or general threats to the client while he or she is traveling. This will include health concerns, most especially medical, that put the client at risk, and ensuring that there are heath care facilities available in case of need (including trauma centers).

The threat assessment will include locating the local police precincts and reviewing the most current records available regarding the amount and specific types of crime reported in each stop-over.  The advance man will arrive prior to the client and the rest of the security detail, making sure the route is as safe and secure as possible, greet the client and rest of the detail upon arrival, and then escort them directly to the where they are supposed to be. The advance man then departs and at an agreed-upon time and performs the same exercise to the next scheduled destination. This action is repeated until such time the client has returned to their original location, whether home or business.

The advance man has kept the security detail team leader constantly up to date as to all relevant details, most especially real or potential problems, that he or she has encountered while ensuring that each site was properly prepared to receive and accommodate the client. Most team leaders will be the first to state that the advance man is one of the most important persons on the team and critical to a successful outcome.

Since most concealed carriers don’t require (or can afford) the services of security detail, it falls upon them to “be their own bodyguards” (note: professional personal protection officers dislike that term).  It is easy enough for concealed carriers to envision the physical act of having to defend themselves, and perhaps their loved ones, against simple assault, aggravated assault, sexual assault, or kidnapping while traveling in the United States, but concealed carriers should consider also consider doing their own advance work in order to prevent having to take this action. In this day and age, a great deal of advance work can be done on the internet.

This is where Greg Shaffer comes in. Upon reading his book Stay Safe, I gave Greg a call and ran some questions by him in order to get his personal take. Set out below are some key points related to travel in the United States that focus on avoiding situations in which concealed carriers, legally armed or otherwise, might be forced to defend themselves.

COLLECT PRE-TRAVEL INFORMATION: Concealed carriers can go to websites like city-data.com and locate statistics such as number of hotels, convenience stores that sell gasoline, restaurants, hotels, medical facilities, percentage of residents living in poverty, number of police officers, and historical crime rates broken out by type of crime and whether the crime rate per 100,000 is less or more than the national average. This knowledge can be used to better select places to stay, dine, and visit. In the event that business requires travel to less safe areas then the concealed carrier can plan accordingly and take extra efforts to reduce their vulnerability.

DEVELOP A COMMUNICATIONS PLAN: There is always a chance that persons traveling together can get separated. This is not typically a problem when all such persons have a working cell phone on their person but can be an enormous problem if that is not the case.  If even one person does not have a phone, their phone is not working, or is lost then it may be difficult for that person to contact other members in their party even if the others have working phone numbers.  There is a high probability that relatively few of us go to the trouble to memorize the phone numbers of others now, so simply borrowing the phone of another person will not solve the problem. Greg recommends that each person keeps a list of phone numbers on their person as well as uploading the same list to the Cloud. Establishing a phone tree means that if the concealed carrier is only able to establish communications with one person then that person has the capability to call others on the list to let them know the situation.  If cell phone service is interrupted, texting may still work.

TAXIS: Many robberies, abductions, and violent crime occur near vehicles. Concealed carriers should ratchet up their situational awareness when choosing, entering, and traveling in a taxi. Concealed carriers should find out which cab companies are legitimate and use only licensed, safe, and clean sources. I have used Uber on multiple occasions with zero drama. I have read that others may have not shared the same experience, but the media’s tendency to sensationalize events causes me to question as to whether taxi travel is safer than that with Uber. Regardless, concealed carriers should choose wisely and be alert for any clues that something is not right and prepared to respond accordingly.

RENTAL CARS:  Street-smart criminals can tell the difference between a rental car and a privately-owned car. Leaving maps and guidebooks in plain sight while getting gas, dining, or parking should be avoided. In order to reduce the chances of being accosted, concealed carriers should avoid parking garages and either park in well-lit areas or leave their rental car with a valet.

BLEND IN TO THE EXTENT POSSIBLE:  This is most especially true when in areas where tourism is popular. Experienced pickpockets are good at spotting unwary travelers and relieving them of valuables.  Concealed carriers would be well advised to keep their wallets, room keys/cards, car keys, etc. in their front pockets where they are easier to protect. While I have no experience at carrying purses, I would think that purses should be strapped over the shoulder (not over the neck) and positioned so that they are in front of the concealed carrier and not the side or the back. If the concealed carrier is properly trained in appendix carry, this is a good time to use it. Criminals are good at spotting concealed handguns, and it is not inconceivable that several of them might attempt to steal the handgun. Handguns worn on the hips are more vulnerable to a sudden grab than one worn near the centerline.

Concealed carriers who choose to hip carry should simply be aware of this fact and take all reasonable efforts to both conceal the handgun at all times and protect it when around others.  The act of pickpocketing is not always as subtle as believed, and some of it takes place in crowds where two to three criminal actors converge on a target, forcibly remove the desired item with full knowledge of the victim, and then leave the scene before they suffer the repercussions.

KNOW WHERE TO STAY: Concealed carriers should consider requesting a room in a hotel located on any floor from the third to the sixth away from stairwells. These floors are less inviting to thieves while close enough to the ground that they can be reached by most fire ladder trucks. Rooms near the stairwells are more likely to be targeted by thieves since they can quickly run to the stairwell and make a quick escape. I recommend leaning a chair against the front door at nights. If a thief does attempt to open the door, the noise caused by the falling chair should be enough to wake me and likely cause the intruder to promptly leave.

TRAVEL WITH WEAPONS: A concealed carrier may travel to a state, city, or location within a city where concealed carry is unlawful or be separated from their handgun for a period of time due to airline travel.  Any time that I travel and check a handgun I also bring two knives, one for utility purposes and the other on my belt for defensive purposes. Upon arrival, I am going to remain unarmed until I can pick up my checked luggage.

This is where improvised weapons play a role. I am a big advocate of carrying a flashlight like the Surefire Stiletto and a robust aluminum pen (I prefer the “click” type) on my person when on a plane. There is a number of pens marketed to the concealed carrier as “tactical pens”. I prefer the more conservative models that shouldn’t get a second look by TSA.  These items can come in quite handy in the event the concealed carrier is accosted and have the advantage of most likely being viewed as a less-lethal tool if use of a handgun is not warranted.

For concealed carriers that must remain unarmed during their stay, a quick stop at a local hardware store for the purpose of picking up a couple of  cheap screwdrivers (Greg prefers the Phillips-head version) and a padlock (which can be inserted in a sock or scarf and used as a slung-shot) may be in order. I view these largely as disposable items that can be jettisoned as necessary.  It is not that am reckless with my money but more that I am not going to get myself in trouble in order to save a few dollars.

BE STREET SMART: As I understand it, travel is relatively safe (even in some undeveloped third-world countries) for those that plan properly, do their homework and, to put it bluntly, avoid doing stupid things.  Concealed carriers that do adequate advance work can greatly increase their chances that their travel experience is as drama-free as reasonably possible.