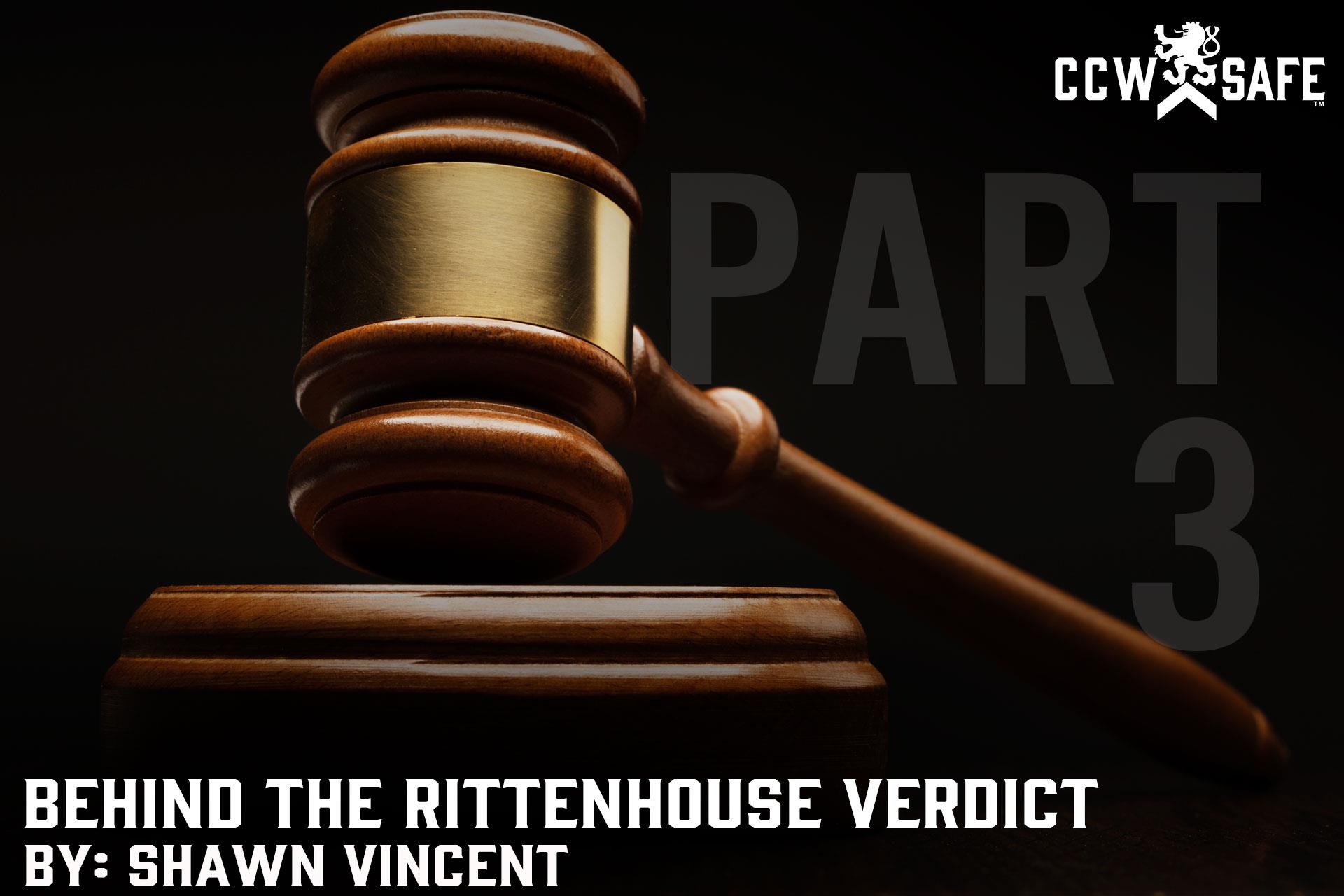 Posted on January 14, 2022 by Shawn Vincent in In Self Defense

Behind the Rittenhouse Verdict – Part 3

Kyle Rittenhouse went to Kenosha, Wisconsin on August 25, 2020 to protect local businesses from rioting that had broken out in the wake of the police shooting of Jacob Blake. Armed with a conspicuous AR-15-style long gun, Rittenhouse drew the attention of Joseph Rosenbaum who chased Rittenhouse down and threatened to kill him with his own rifle. When Rosenbaum put his hands on the barrel of the rifle, Rittenhouse fired four times, including a fatal shot that tore through Rosenbaum’s lungs and liver.  In the moments after the shooting, the nearby crowd turned on Rittenhouse, and he retreated towards where he knew there was a police presence. On his way to safety, Rittenhouse fired four more times in three separate incidents, killing Anthony Huber and wounding Gaige Grosskreutz. In self-defense, every shot must be justified, and in this series of articles, we are taking time to analyze each round Rittenhouse fired and discover how a jury may have arrived at their “not guilty” verdict. Last week, we explored Rittenhouse’s initial encounter with Rosenbaum, and this week we’ll look at the encounter that ended with the death of Anthony Huber.

Video released by defense attorneys shows Rittenhouse running away from the Rosenbaum shooting on a street swarming with people. One person shouts out for someone to shoot Rittenhouse in the head. An unidentified assailant runs up to Rittenhouse and strikes him, knocking his hat off. Moments later, Rittenhouse stumbles, and while he is on the ground, another unknown individual leaps into the air in an attempt to kick Rittenhouse. Rittenhouse fires two rounds. Neither strikes anyone. Among the five charges the jury would consider was a count of First-Degree Recklessly Endangering Safety related to these two shots. While not nearly as serious as the homicide charges, a guilty verdict on this count could have resulted in a prison sentence of 12 years.

Don West, criminal defense attorney and National Trial Counsel for CCW Safe, says that the discharge of a firearm, even if no one is harmed, is legally considered the use of deadly force, and it requires the same legal justification as a shot that resulted in an injury or death. Had Rittenhouse fired only these two shoots, the jury may have given them more scrutiny. Sandwiched, as they were, between two shootings that resulted in homicides, the jury likely decided these two shots were relatively inconsequential compared to the others. That said, there is a legal risk that develops when a jury has a lesser charge to consider during deliberations. Don noted that throughout the trial, the prosecution wanted to focus the jury’s attention on Rittenhouse’s dangerous decision to bring a rifle to a riot rather than to focus on each individual shot, suggesting the defender was broadly responsible for creating the circumstances that led to his life or death decisions. Had the jury felt that Rittenhouse bore some moral responsibility for the shootings, they might have chosen this lesser charge of First Degree Recklessly Endangering Safety to hold him partially accountable without convicting him of homicide. Luckily for Rittenhouse, the jury stuck to the law and acquitted him on this count.

Just moments after the drop-kick encounter, while Rittenhouse was still prone, a 26-year-old named Anthony Huber struck him in the head with a skateboard and then reached for Rittenhouse’s rifle. Rittenhouse fired a single shot that struck Huber in the torso causing extensive damage to his heart and lungs. Huber managed to stumble a few steps away before he collapsed and died. At trial, prosecutors argued that a skateboard is a toy, not a deadly weapon, and therefore, Rittenhouse’s use of deadly force was disproportionate. Prosecutor James Kraus said, “Someone should tell the parents and grandparents and Santa Claus giving skateboards this Christmas about how they’re giving their children a deadly weapon.” Don West says that such a proclamation smacks of sarcasm and likely did not resonate well with the jury. Nonetheless, Don says that it raises important questions about what constitutes a deadly weapon in a self-defense context.

Firearms instructor Steve Moses says that something doesn’t have to be designed as a deadly weapon to be used as a deadly weapon. After the Rittenhouse case made headlines, Steve purchased a skateboard just to see how much damage it could cause in the wrong hands. The first thing he noticed was the skateboard’s heft. With the metal components that support the wheels, an average skateboard can weigh seven to nine pounds – about two to three times the weight of a baseball bat. Steve swung the skateboard against various objects and found it could take a chunk out of a piece of wood. Steve says, “If someone was struck in the head with a skateboard by an individual who is standing over them, who has the ability to not only put the full torque of their body but also use gravity to swing that thing at your head, I’m almost certain that a good solid hit would lacerate somebody and probably cause a pretty serious concussion at a minimum.”

A skateboard can be a deadly weapon if an attacker has the intent, ability, and the opportunity to use it as such. It’s important to note that in Steve’s assessment, the attacker is standing and the defender is on the ground. It means the attacker has a huge tactical advantage and the defender is unable to retreat. If both parties were standing and spaced even just a few feet apart, the attacker’s ability and opportunity to use a skateboard as a deadly weapon is significantly reduced, and the use of a firearm would be disproportionate and unjustified.

If you’ve ever played the classic board game “Clue,” you know that any heavy object – a wrench, a candlestick, a lead pipe – can be transformed into a lethal weapon if the person wielding the object has the intent to kill. Objectively, however, a wrench is significantly less lethal than a firearm, and using a firearm to defend against a less-lethal force carries significant legal risk. The lesson for concealed carriers is that if you are confronted with an attacker armed with a less-lethal weapon, you should do your best to retreat and create enough distance to eliminate the attacker’s immediate ability and opportunity to use whatever object they have as a deadly weapon. If you cannot retreat, you must remember that a firearm used against almost any other type of weapon – especially an object not designed to be used as a weapon – may be considered disproportionate. You should consider using verbal warnings and perhaps even a defensive display in an attempt to ward off your attacker, and only resort to deadly force when it is absolutely clear that the attacker has the intent and the imminent opportunity and ability to cause serious bodily injury or death.