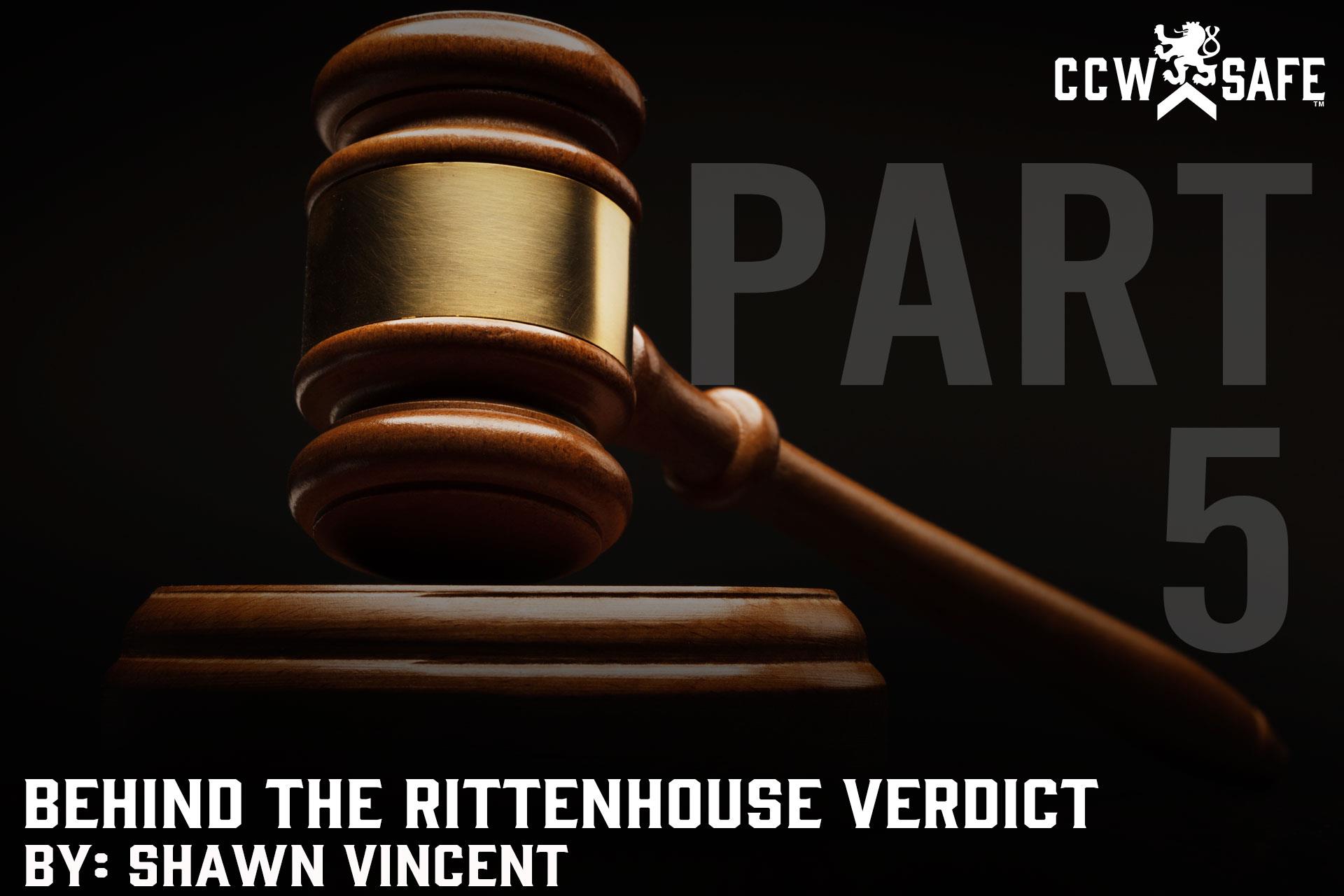 Posted on January 28, 2022 by Shawn Vincent in In Self Defense

Behind the Rittenhouse Verdict – Part 5

When a jury is sent to deliberate after closing arguments in a criminal trial, the judge instructs all parties to remain at or near the courthouse. Generally, everyone needs to be ready and available to assemble with five to ten minutes’ notice in the event that the jury reaches a verdict, or in case there is a jury question for the lawyers to consider. There is little to do but wait. The attorneys wring their hands, second-guessing their decisions, agonizing over “what-ifs.” It’s worst for the defendant who, after enduring months or years of a criminal prosecution now awaits the judgment of strangers. With a word, the jury can send the defendant to a grim cinderblock cell and to a bleak future. With two words, the jury can release the accused to a joyful celebration with their family and to a life of seemingly limitless possibilities. Guilty. Not guilty.

Kyle Rittenhouse waited four days while the jury considered his case: five felony counts including First-Degree Intentional Homicide, First-Degree Reckless Homicide, Attempted First-Degree Intentional Homicide, and two counts of First Degree Recklessly Endangering Safety. Depending on how the jury ruled, he could have faced life in prison in the worst case, a decade or two for a mixed decision, or freedom in the case of a complete acquittal. After twenty-seven hours of deliberation, the jury delivered their verdict one count at a time. “Not guilty” on count one. “Not guilty” on count two. Rittenhouse began to tremble when he heard “not guilty” for counts three and four. He fell to his knees when he learned the jury found him “not guilty” for the fifth and final count. A complete acquittal.

It is the best result the defense could have hoped for, but for anyone who has been through the criminal justice system, it’s hard to call an acquittal a “win” becasue so much has been lost. First of all, a defendant who relied on a bondsman to stay out of jail won’t get back the 10% fee they paid. Additionally, a legal defense can easily cost hundreds of thousands or dollars (Rittenhouse was lucky he had a legal defense fund and lawyers who were willing to take on the high-profile case). Most defendants lose their jobs when they’re charged with a homicide-related crime, and they’re forced to lean on their friends and family for support. It’s a strain on everyone. For better or worse, Kyle Rittenhouse’s life has been turned upsidedown and forever altered.

Firearms instructor and CCW Safe contributor describes Rittenhouse’s legal victory as a “bittersweet win.” Steve says, “I’m going to have to say that he survived as opposed to a win. There is no telling what the rest of his life is going to look like. There is just no way that I can really imagine what he went through and what he put his family through.” Steve makes a great point: criminal defendants don’t “win” cases; they simply survive.

CCW Safe often refers to the legal defense of an armed defender as “the second fight.” Don West, criminal defense attorney and National Trial Counsel for CCW Safe says, “The first fight is the one for your life, and you have to literally survive that one when you’re facing a deadly force attack. If you get to the point that you are charged and indicted, you are then in that second fight, and that’s the one for your liberty, or essentially, the rest of your life.”

“The resources needed to fight that fight are extensive,” Don says. “It can be a year or two, or more, of waking up every morning and just when you begin to think, ‘Hey, it’s a pretty good day,’ you remember that you don’t know how many more days you’re going to have like that because if the jury comes back, and it goes against  you, you’ve put yourself and your family in the worst possible situation.”

None of this is meant to discourage anyone from using deadly force to defend themselves or their family in a life or death situation. It is, however, a reality check regarding what it takes to mount a legal defense against a homicide charge, and an acknowledgement that even an acquittal comes with significant consequences.

Of course, Rittenhouse had the legal right to make all of the decisions he made, and he may have very well made those decisions with the best intentions, but even after a complete acquittal, one has to wonder if Rittenhouse truly feels the ordeal he endured and the sacrifice he and his family made was worth whatever benefit came of his choice to help defend a local business from rioters.

Kyle Rittenhouse is lucky he survived the night of August 25, 2020, and he’s even luckier that he survived his criminal prosecution with a complete acquittal. The lesson for concealed carriers is that, if you are criminally charged in the wake of a self-defense shooting, you’ve already lost. Even if you are acquitted, there is no winning as a criminal defendant; there is only surviving. The best way to survive a self-defense scenario – and the “second fight” that may follow – is to avoid it in the first place. That’s not always possible, but if you ever find yourself leaving a position of relative safety to insert yourself into a potentially dangerous situation, take a moment and make an honest assessment of what you have to gain by that decision and, perhaps more importantly, what you stand to lose.