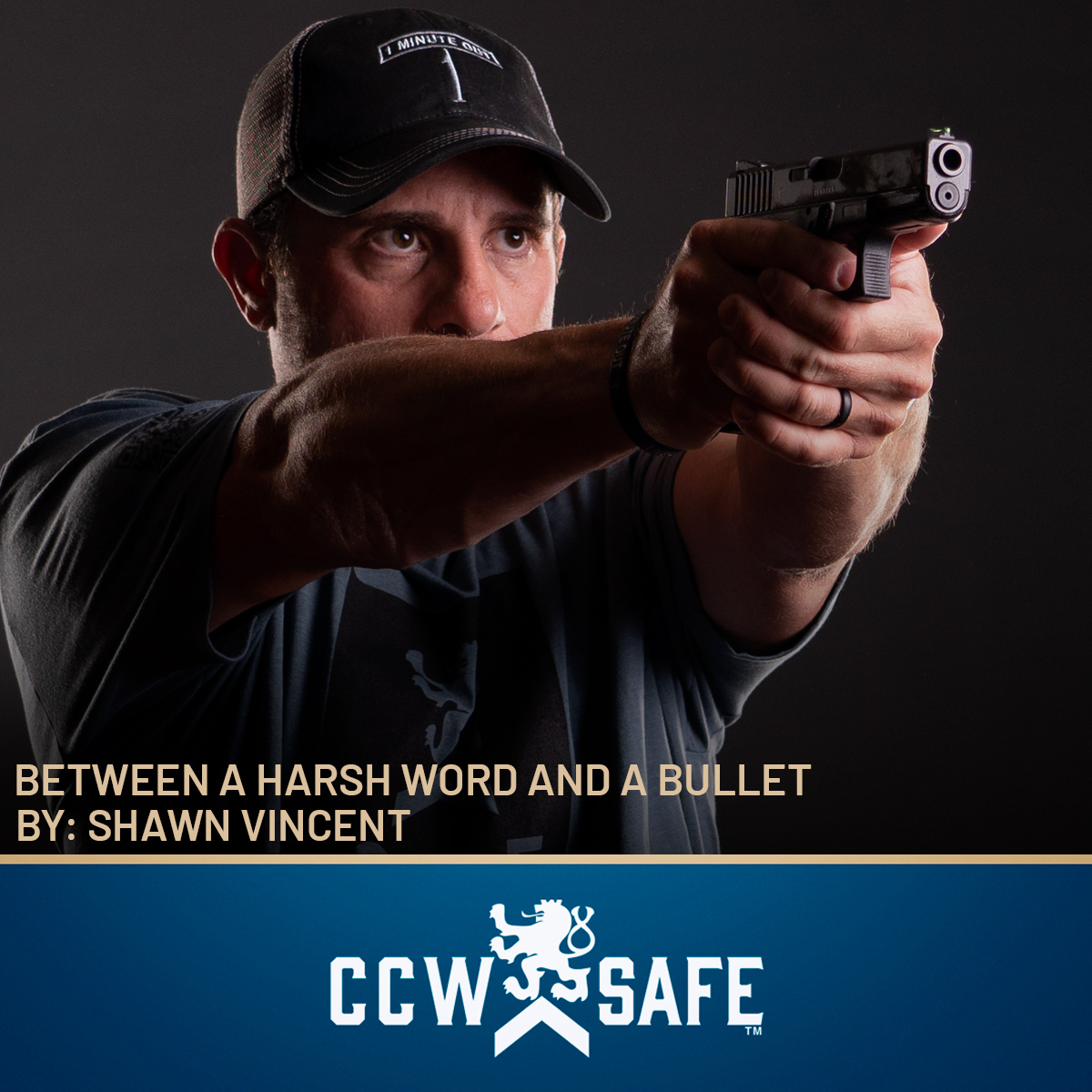 Posted on July 22, 2022 by Justin Collett in Shawn Vincent

Between a Harsh Word and a Bullet

If a knife-wielding assailant threatens to kill you from across a parking lot, he may have the ability and intent to follow through, but unless he comes closer, he doesn’t have the immediate opportunity. If a would-be robber casually raises his shirt to reveal a pistol tucked in his waistband, he’s just telegraphed his ability and willingness (intent) to kill you, but until he moves to draw his pistol, an armed defender who is both skilled and prepared may still have the opportunity to resolve the situation without a shot being fired.

Firearms instructor and CCW Safe contributor Steve Moses teaches his students that an attacker must have the ability, the intent, AND the opportunity to incapacitate, cripple, or kill before an armed defender can resort to deadly force. Steve’s advice mirrors the law which requires defenders to have a reasonable belief of an imminent threat of serious injury or death to justify a deadly force response. All of these concepts are very subjective, and they require armed defenders to exercise considerable judgment. In the examples of the knife-wielding assailant and the tucked-pistol robber, the ability and intent are clear, but imminence – that is, the opportunity – is slightly more ambiguous.

Don West, criminal defense attorney and National Trial Counsel for CCW Safe, says that the idea of “imminence” is not well-defined in the law, but in practical terms, it means “right now.” For the defender, it means that there is no time left to do anything other than to deploy deadly force or else face serious injury or death. The knife-wielding assailant on the other side of the parking lot has to close the distance before he can attack, and while that may take only seconds, in a court of law, those seconds could prove the difference between murder and self-defense. The tucked-pistol robber might only require a second to two to reach for his pistol, draw, and fire – but until he grips the gun, there may be enough ambiguity for a prosecutor to argue and for a jury to conclude that the threat was not legally imminent.

We frequently stress de-escalation and avoidance. As Tom Givens says, “I give people a double-your-money-back guarantee that you’re going to survive every single violent confrontation you don’t get in.” But when an armed defender has only a second or two before a deadly threat becomes imminent, retreating is unlikely a safe option, and verbal commands – without some way to back them up – could be fatally useless. This is when, as Tom Givens says, “It is important to have an option between a harsh word and a bullet.” A well-executed defensive display of a firearm in the low-ready position might just fill that gap.

Tom says, “Our default ready is both hands on the gun, trigger finger in register, gun pointed at the ground right out in front of us. You can snap it up to the eye target line in a fraction of a second, but it’s not pointed at anybody. Your finger is not on the trigger. Nobody’s actually endangered.”

Tom recommends combining a defensive display with a short, emphatic verbal command such as “Stop!”, “Drop it!”, or “Go away!” Verbalization is a high-order mental activity, Tom says, and it ties up cognitive capacity that should be reserved for responding to the life-and-death situation before you, so you don’t want to engage in complicated discourse. “Those commands clearly articulate what I want, but don’t tie up my head for a long time,” Tom says.

Once confronted with a defensive display and strong verbal command, if the assailant retreats, the defender has diffused the situation without firing a shot. If the attacker presses the attack, the threat becomes clearly imminent, and the defender is in a position to confidently deploy deadly force within a fraction of a second.

If the use of deadly force is justified only when the threat of death or serious injury is imminent, then a defensive display is justified only in the short moments before that threat becomes imminent. If a defensive display is deemed unjustified, the armed defender can face serious charges including aggravated assault or brandishing. Tom Givens says, “Brandishing, in many instances, comes from the premature display of the firearm when it’s not really a deadly force incident, and you make it one by drawing a gun.” Executing a justifiable defensive display requires split-second decision-making and a lot of practice with drawing your weapon. Steve Moses believes many brandishing cases are a result of poorly trained armed defenders who draw too soon because they are not confident they can get their handgun into action quickly or do not have any other defensive skills or tools. As always, training is critical.

Some armed defenders may be tempted to take a defensive display too far by pointing the firearm at the attacker. Steve Moses reminds us that you should never point a gun at something (or someone) you’re not willing to shoot, and legally, Don West emphasizes that unjustifiably pointing a gun at someone could lead to more serious charges than brandishing, and it is harder to defend in court than a low-ready defensive display.

Similarly, some armed defenders consider a strategic warning shot as a viable less-lethal alternative to shooting an assailant, but every expert we’ve spoken with – from both a tactical and a legal perspective – says warning shots are a very bad idea. Tom Givens says that the bullet from a warning shot has to go somewhere, and armed defenders are responsible for every bullet they fire. Moreover, Tom says that by firing a warning shot, “What you’re probably convincing this guy, because he’s probably been around the block a few times, is that you don’t have the balls to shoot him, and that he can probably take that gun from you and feed it to you.” Don West says that “Once you have pulled that trigger, from a legal standpoint, you have now used deadly force, so the justification of having the gun and displaying the gun versus having the gun and firing it is very, very different, and it can get you into trouble a lot quicker.”

In self-defense, seconds matter. We’ve seen several heart-breaking self-defense cases where armed defenders who faced a credible threat were convicted of a homicide-related charge because they fired too soon – sometimes just a moment too soon. As a concealed carrier, if you’re ever faced with an attacker who is willing and able to incapacitate, cripple, or kill you, but they are a second or two from having the imminent opportunity to do so, a defensive display provides a solid solution to a difficult self-defense problem. If you’re wrong about the threat, the legal consequences of a brandishing charge are dramatically less severe than the punishments for an unjustified homicide. If you’re right about the threat, a defensive display may convince your attacker to break contact, and if it doesn’t, you can deploy deadly force in a fraction of a second, and you can do so with confidence that you are likely legally justified. “I’ve found early on,” Tom Givens says, “that drawing a big gun to a hard ready (a low ready position executed with speed and deliberation) with a war face will keep you from ever having to shoot a lot of people.” If you can end an attack without using deadly force, that’s always better than the alternative.