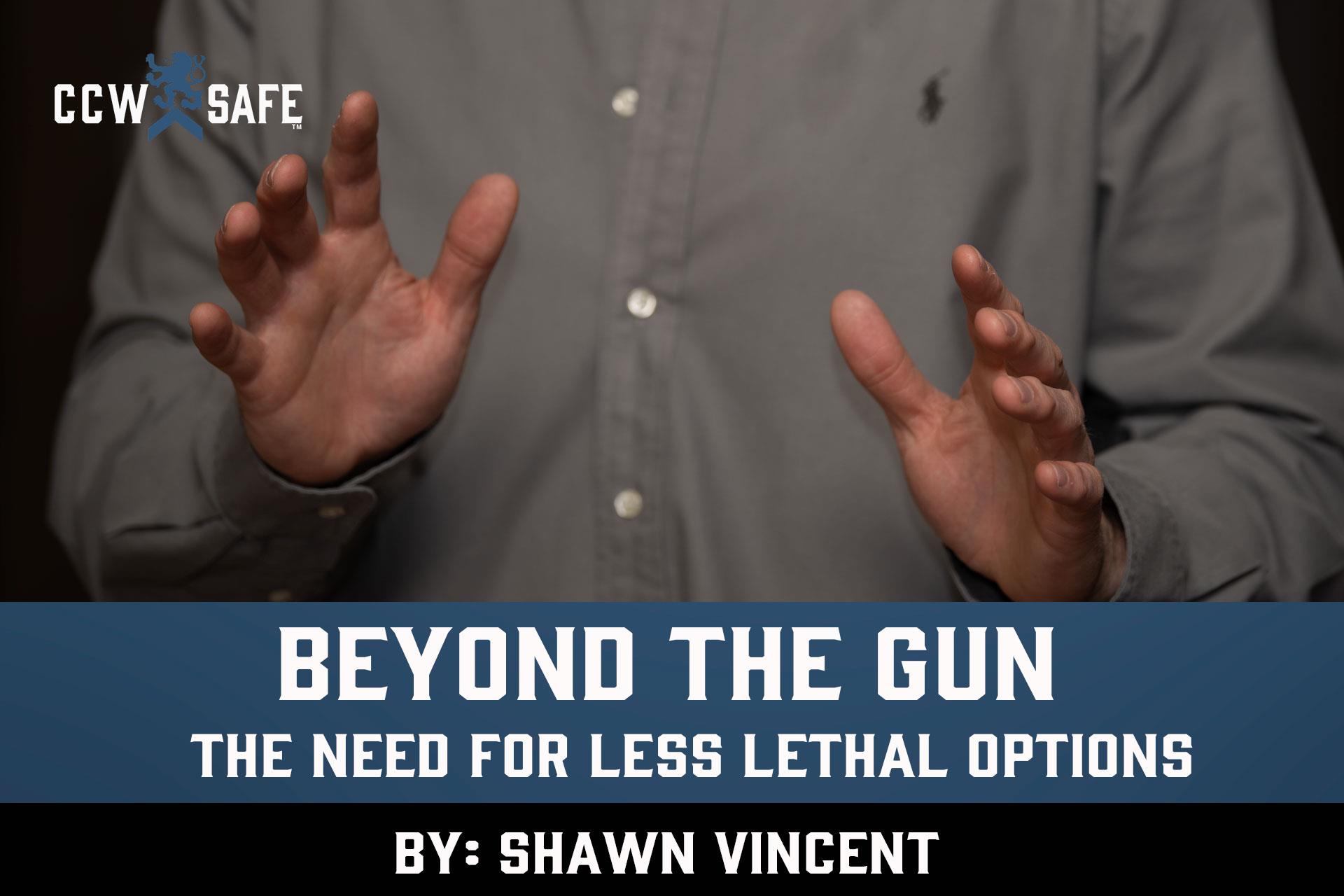 Posted on December 11, 2020 by Shawn Vincent in In Self Defense

Beyond the Gun: The need for less lethal options

The need for less lethal options

Last week, we discussed the armed defender’s dilemma — that is the challenge of determining whether an unarmed attacker poses a threat that could imminently rise to the level of serious bodily injury or death. Firearms instructor and CCW Safe contributor Steve Moses recently wrote that, while there’s plenty of evidence that a punch to the head can prove fatal, “If a concealed carrier is punched in the face and not wobbled (possibly concussed), they are in all likelihood not seriously injured. Suffering a broken nose or chipped tooth is not a justification for then shooting that person.”

That leaves most armed defenders with two choices: fight or flight. But it’s not always possible to safely retreat, and most people won’t come out of a physical altercation unscathed. There’s a real need for something between a fist fight and a bullet.

How about OC spray?

Claude Werner, a veteran Army Captain and active firearms instructors says, “I do not proselytize about owning firearms. If I proselytize anything, it’s about pepper spray. Everybody ought to have pepper spray.”

Claude cites the Michael Drejka case to illustrate his point. Drejka was violently shoved to the ground by Markis McGlockton in the parking lot of a convenience store. Prone and vulnerable, Drejka feared the unarmed McGlockton would press the attack. Drejka pulled his pistol and fired a single fatal round. “As some point,” Claude says, “a case might have been made for using some sort of less lethal force, but deadly force ultimately was decided in court not to be the appropriate answer.” Pepper spray could have saved Drejka from 20 years in prison, and it could have saved McGlockton’s life.

Tatiana says less lethal options can help armed defenders “insulate their decision-making.”  The more a defender deploys less lethal force tactics to ward off an attacker, the more likely a defender’s use of force will be found justified should they ultimately have to resort to a gun.

If an aggressor follows you when you try to retreat, if they ignore your voice commands and then somehow fight through a face full of pepper spray, you can be pretty sure they mean you harm. Tatiana says if you’ve “checked all the boxes and done all of the things, if they continue to pursue you through that, there’s a level of commitment there that if you don’t respond appropriately, your life could end. And that is where we have to start using the firearm.”

Steve Moses told me he’s been sprayed twice in the course of his tactical training, and he found the amount of irritation made it almost impossible to keep his eyes open. Used against an unarmed attacker, the debilitating effect of pepper spray is often enough to end the assault — without exposing the defender to the potential legal risks associated with going to the gun.

Don West, criminal defense attorney and National Trial Counsel for CCW Safe says he’s never encountered a self-defense case where a defender was charged with a crime for using pepper spray. When someone deploys pepper spray, it’s often used instead of deadly force and is therefore plainly and objectively a reasonable response to a threat. Even if someone was charged with some sort of assault for using pepper spray, the legal defense would be much easier than defending a firearm homicide.

The lesson for concealed carriers is that if you encounter an unarmed aggressor, it’s difficult to know whether the individual poses a lethal threat until it’s too late. Use your firearm too early,  you could go to jail. Use it too late, you could be dead. It’s the armed defender’s dilemma. One solution to the dilemma is pepper spray, and as Tatiana Whitlock says, no gun owner is “too cool for less lethal tools.”