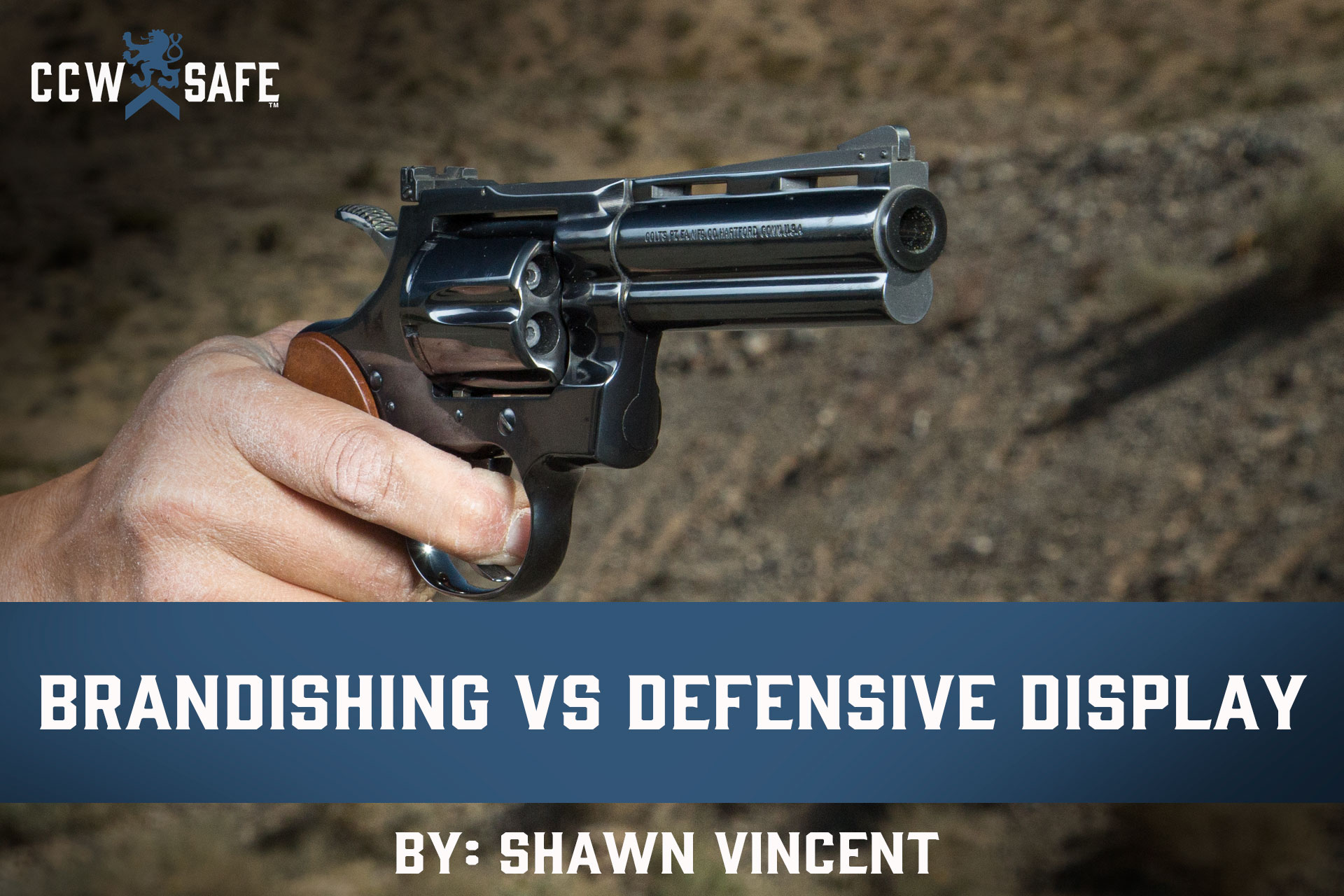 Posted on August 9, 2019 by Shawn Vincent in In Self Defense

Brandishing a Firearm Vs. Defensive Display

Brandishing a Firearm Versus a Defensive Display

Brandon Jackson got upset at another driver in traffic. He experienced a bout of road rage. We don’t know what the woman did to enrage him, but when the two drivers stopped at a red light, Jackson produced a pistol. He pointed the gun at her, then began yelling. Terrified, the woman hit the gas, ran the red light and drove away as fast as possible. She also dialed 911 for help.

Jackson drove off and got onto Interstate 80, near Sacramento, California. Just a few miles down the road, officers from three separate law enforcement agencies (including the California Highway Patrol) spotted Jackson’s vehicle. They pulled him over and made an arrest. According to news reports, Jackson was booked into Solano County Jail on suspicion of a weapons violation and producing criminal threats – in other words, “brandishing” a weapon.

Don West, veteran criminal defense attorney and National Trial Counsel for CCW Safe, explains that people often use the term “brandishing” loosely to describe the reckless display of a gun. But this term has a specific legal definition as well. “When we talk about brandishing,” West says, “we’re talking about an aggressive act that is a crime in and of itself, and it can have serious consequences.” Often those consequences mean jail time.

In many jurisdictions, brandishing can come with a spate of related charges. In the I-80 incident, Jackson was charged with “producing criminal threats.”

In another recent case, a woman pulled out a gun during a fight following a high school dance competition. She was charged with “simple assault” in addition to brandishing. Don West says “aggravated assault” charges are common in such cases.

Any responsible gun owner should recognize that Brandon Jackson’s actions were unjustified and inexcusable – but sometimes the situation isn’t as clear.

Recently, we wrote about the case of Sheri McClatchy, a laundromat attendant who was attacked by an angry patron. The patron was enraged over a dispute about the laundromat’s refund policy. McClatchy escaped the clutches of the patron and retreated outside, where she called 911. She then armed herself with a pistol. When the patron reengaged with her, McClatchy raised her pistol, and wisely, the patron left the scene. No shots were fired.

Since the episode was captured on security video, and because McClatchy called 911, police gave her the benefit of the doubt. The “defensive display” of her pistol was deemed justified.

Imagine, however, if there was no video footage to corroborate McClatchy’s story, demonstrating that the patron was the initial aggressor. What if the angry patron called 911 first, reporting that the laundromat attendant had pulled a gun on her? It could have been a very different outcome for McClatchy, legally speaking.

The Basic Rule for Displaying a Firearm

Using a firearm for self-defense is serious, even if you don’t fire it. Brandon Jackson didn’t recognize this fact, otherwise, he would have disengaged and driven off, keeping his gun tucked away.

Sheri McClatchy, on the other hand, recognized the seriousness of a defensive firearm display. She had the foresight and good judgment to call the police – even as the encounter was unfolding.

The rule of thumb is that you should never display your firearm unless you’re also justified in the use of deadly force. But perhaps a more important lesson for concealed carriers here is that, should you ever have to display your firearm in self-defense, consider any such display as serious as if you had to fire your weapon. Be the first person to call 911 to report the incident, cooperate with law enforcement, and like CCW Safe advises, don’t make detailed statements to law enforcement without a good attorney present.