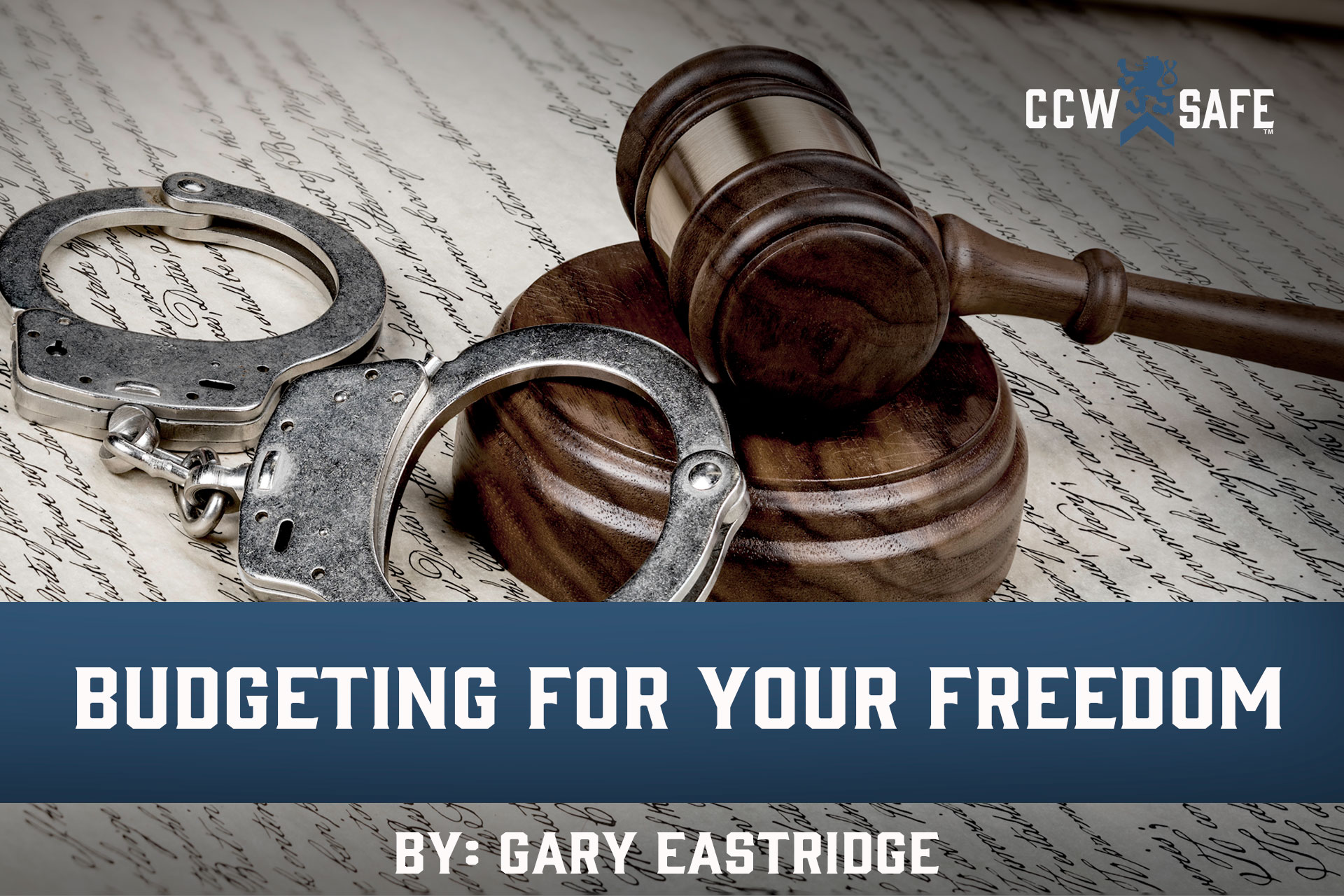 Posted on February 18, 2020 by support@ccwsafe.com in Training

Budgeting for your Freedom

Budgeting for your Freedom

The problem with defense limits

Life requires us to make decisions based upon our financial resources. Whether buying a car or home our income and financial resources are evaluated and a price or payment limit is set based upon what we can afford. This is a common sense approach to avoid getting into financial trouble down the road. So when it comes to self defense coverage how much justice can you afford? What can you budget to pay when your freedom is at stake?

If you do not have coverage, you need to be prepared to budget for your defense. When I was involved in my on duty shooting I had representation from our police union, the Fraternal Order of Police, helping me in case I needed legal defense. If you do not have $300,000 plus to dedicate to your defense you need to consider the consequences. The funds you spend on your defense are gone whether you win or lose the criminal and or civil case. My fear has always been being sued following a justifiable shooting, prevailing in a court of law, and finding myself bankrupt after spending my retirement earnings and assets budgeting for my defense.

At CCW safe we know what it cost to defend a member charged with murder after a self defense shooting. How do we know? We have done it. The details of Stephen Maddox’s case have been well covered on our website. If you are not familiar with Stephen’s story visit this link for the details: https://ccwsafe.com/blog/in-self-defense-stephens-story. Read it and the subsequent articles that break down the who, what, when, where, and the how much.

I have spent the bulk of my adult life in and around the criminal justice system. There are many good people working in the system. Most of them do the best they can. But they are human. No two people agree on every issue or incident.  In addition to my time in law enforcement  I ran my own private investigations business for several years. I did not volunteer my services. The current rate for a private investigator in my jurisdiction can run from $65-$150 per hour. Attorney rates can range from $200 to upwards of $500. And the old adage “you get what you pay for” applies. Had I been in Stephen’s position I may have been able to pay for the same quality defense he received. But I would have had to sell my home, my possessions, liquidate the retirement savings I have amassed over a 32 year law enforcement career, and put the balance on a payment plan.

Sometimes in criminal cases the little things can make all of the difference. Do you need a Private Investigator (PI) to do follow up investigations? Do you need expert witnesses? In Stephen’s case the work done by the PI’s and expert forensic pathologist were crucial to Stephen’s not guilty verdict.. The basic facts of the case were not in dispute. However the details were not as clear. The police and prosecutor relied on what turned out to be flawed or overlooked evidence to arrive at their theory of murder.

Two videos that showed Steve could not have been attacked at the time he claimed because it showed the attacker at another location during the second of three attacks. The PI found the videos were recorded on 2 different recording devices that showed 2 different time stamps. When they were examined by the PI and a representative of the security system it was determined there was a 117 second time difference between the two systems. The nearly 2 minute differential showed there was ample time for the second attack to have occurred. Additionally the PI found and interviewed an eye witness to the second attack. This witness was never interviewed by police.

The PI also interviewed an eyewitness to the shooting who was not interviewed by police until shortly before the trial almost 2 years later.  Even though Stephen provided his name and phone number to police investigators during his interview shortly after the incident. This witness verified Stephen’s statement of the attack. The expert forensic pathologist identified cylinder gap burn on the attackers t-shirt showing he was in very close proximity to the firearm when it was discharged. This theory was ignored by police. Had Stephen not been able to budget for PI’s and experts it is my opinion he would be serving life in prison today for simply defending himself.

Keep in mind that Stephen was terminated from his job as soon as news of the incident reached his employer. Take a minute and look at your resources. If you choose to carry without coverage and are involved in a use of force incident what do you need to budget for?

From my experience these are the things you must set aside funds for to successfully defend your actions. Keep in mind even with a justifiable shooting you will need representation on the first two.

1. Investigative interview. You can agree to an interview without representation. I wouldn’t. None of  my fellow officers would. The detective interviewing you wouldn’t.

2. Grand Jury testimony. Your case may go before a Grand Jury. If you choose to tell your side of the story you should consider having representation.

4. Attorneys for pretrial and trial.

So lets take a look at defense limits and put together a defense budget. We will use Stephens known facts as a reference. Let’s compare to a couple competitors plans. Plan A that has a $250k occurrence limit and plan B that purports to cover “uncapped” defense costs.

You are arrested and charged with Murder 1 and you are being held on no bond.

Post trial – Appeals (this is estimated as we successfully defended our member) $100,000

This does not take into consideration the possibility of a civil trial after the criminal trial.

CCW Safe would have covered 100% of the listed costs.

This doesn’t include a myriad of ancillary costs spent on preparing Stephen’s case. CCW Safe is the only company with a boots on the ground response team. A Critical Incident Coordinator (CIC) was flown to NC within hours. Stephen was held in jail without bail initially so the CIC worked with his employer and family to meet his immediate needs. CCW Safe flew staff to NC several times to meet with Stephen and his defense team. CCW Safe sent three staff members to support the defense team during the 2 week trial. These additional costs ran into the tens of thousands. They are not even calculated in the above equation.

As you can see, not reading the fine print can be costly. If you choose to carry without coverage you should budget $300,000 plus for your defense. If you choose a plan with limits you may need from $100k plus. If your self defense coverage has a defense limit, low bond limit, does not cover experts and investigators be prepared to budget for these costs. They can make the difference in whether you go home or to prison.  READ the fine print. Uncapped does not mean everything is paid. Every company in this industry claims to be the best. Take the above information and read the terms and coverage of every company, then make an informed decision. It is really that simple.