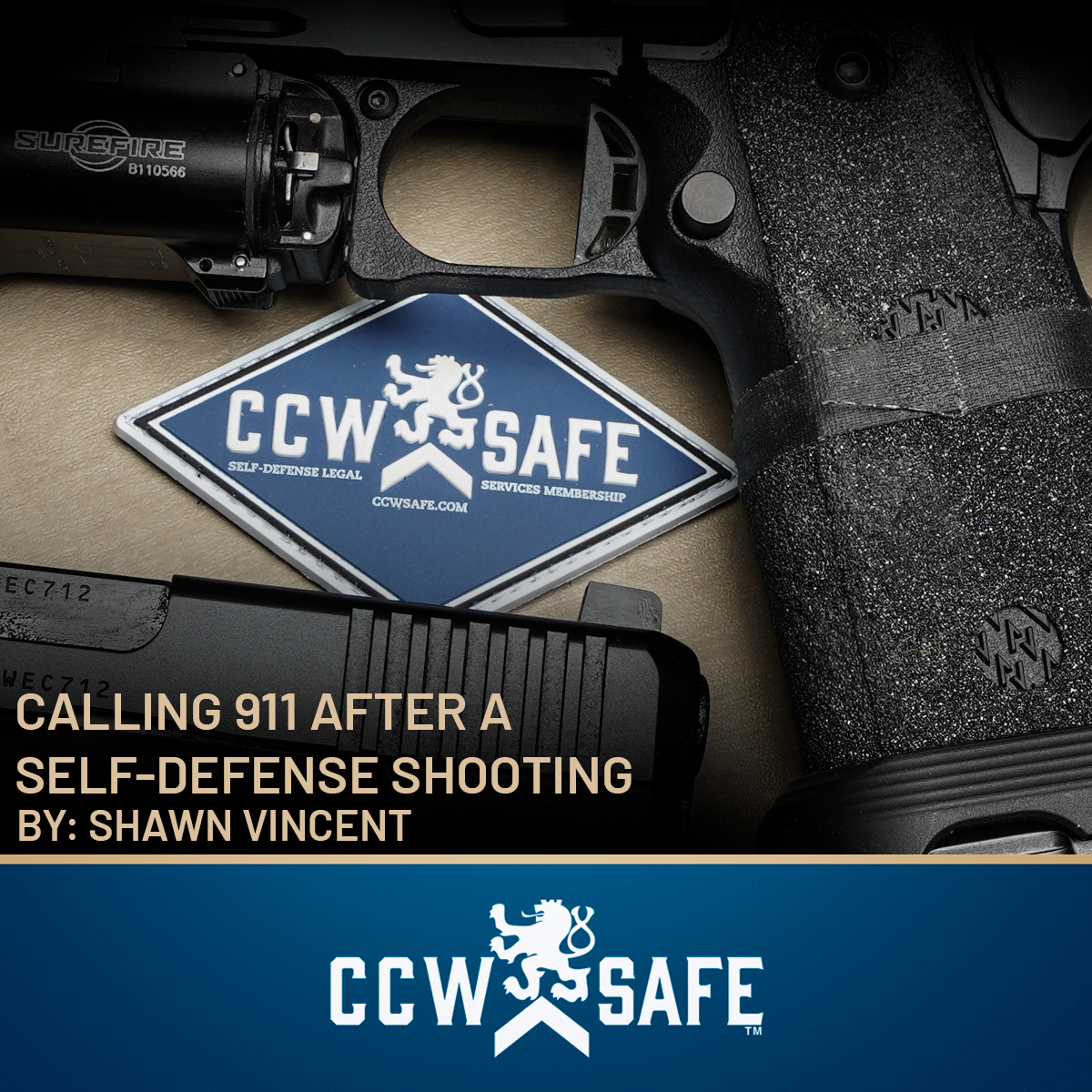 Posted on September 16, 2022 by Justin Collett in Shawn Vincent

Calling 911 After a Self-Defense Shooting

After a violent confrontation, the first party to call 9-1-1 is often, at least at the very outset, presumed to be the victim by law enforcement. This isn’t an official policy, but Don West, who is National Trail Counsel for CCW Safe and a career criminal defense attorney, can attest anecdotally that he’s seen this bias play out in many of the cases he’s handled. Stan Campbell, CCW Safe co-founder and a retired police lieutenant, agrees that when law enforcement responds to a call, they often initially take the point of view of the caller. This mindset can change quickly once a few facts are uncovered, but for concealed carriers, it means there is a real advantage to being the first to call 9-1-1 in the immediate wake of a self-defense shooting.

Recently, I spoke with Don West and Steve Moses, a CCW Safe contributor and firearms instructor, about what an armed defender should consider in the aftermath of a self-defense shooting. Last week we discussed the top priority: getting to safety. Once a defender has broken contact with the attacker and found the nearest secure location, the very next thing they should do is call 9-1-1.

Last week, we referenced three self-defense shootings. Melinda Herman shot a violent intruder five times and fled to her neighbor’s house with her children. Zach Peters barricaded himself in his room after shooting three intruders who had broken into his home by shattering a sliding glass door. And CCW Safe member Stephen Maddox hid behind a nearby building after shooting an attacker who had wrestled him to the ground in a parking lot. Stephen has granted us permission to disclose the details of his case.

Each of these defenders had contact with 9-1-1, and in each case, the timing and content of their emergency call helped establish the legal justification for their use of deadly force.

When Melinda Herman saw a strange man with a crowbar walking swiftly to her front door, she gathered her twin children and retreated to a locked room with a cell phone and a .38 revolver. Terrified, she called her husband at work – he had just taught her how to use the pistol weeks before. While on the phone with his wife, Mr. Herman called 9-1-1 from his work phone and became an ear-witness to the shooting, while the emergency operator listened to his verbal interaction with his wife.

Zach Peters shot each of the intruders he encountered in his kitchen and then barricaded himself in his room and called 9-1-1. He explained that he had shot intruders who had broken into his house, he conveyed that at least one of them was still alive, and he urged first responders to get there quickly. He stayed on the phone with the emergency operator until police arrived.

Maddox had already survived two physical bouts with his attacker when he initiated a call to 9-1-1. Before connecting with the operator, he hung up because he spotted a friend who he thought could help him. Then his attacker reappeared and tackled him to the ground. Maddox shot him five times before freeing himself, and by the time he retreated around a corner, 9-1-1 called him back, and he reported that he had been attacked and that he had shot the assailant.

The Herman case teaches us that the defender doesn’t necessarily have to be the one to call 9-1-1. Don West says it can be a member of your family or a witness to the event. What is important is that the call is prompted by the defender, that it is stated that the defender was attacked, and that the defender is clearly identified. Also, when a defender can safely report an intruder before the use of force event, it helps establish the ultimate justification for self-defense. The 9-1-1 recording could become crucial evidence used to exonerate the shooter.

Zach Peters was home alone, so he made the emergency call himself, and we’ve described it as a textbook 9-1-1 call.  Peters immediately states, “I’ve just been broken into,” and he explains he shot the intruders. He says one of the intruders is still talking, and he urges that first responders need to hurry.  He informs the operator that he is barricaded in his room and even describes the room as being in the southeast corner of the house. He plainly stated his self-defense claim and gave first responders enough information to identify him once they arrived.

While Herman and Peters were never charged with a crime, Maddox faced a murder prosecution. At trial, Maddox’s attorneys told the jury that “murderers don’t call 9-1-1.” The jury agreed and acquitted Maddox after deliberating for only about two hours. The fact that Maddox had a prior contentious personal affiliation with his attacker worked against him and may have been the key reason he faced charges. The fact that Maddox called 9-1-1 immediately before the attack, and that he described the attack and made a self-defense claim when 9-1-1 called him in the immediate aftermath — it all helped tip the scales back in his favor at trial.

9-1-1 calls are recorded, so everything an armed defender says will be part of a police investigation. As we know from cop shows on television, “anything you say can and will be used against your in a court of law.” Therefore, as an armed defender, you should not disclose too many specific details on the 9-1-1 call — simply explain that you were attacked and that you were forced to defend yourself. Identify yourself so police will be able to recognize you when they arrive. While it may sound counterintuitive, ask for a medical response for the person you just shot. Follow the operator’s instructions so that you have a smooth first encounter with the responding law enforcement officers. Next week we present some considerations for armed defenders on how to prepare for first responders in the aftermath of a self-defense shooting.