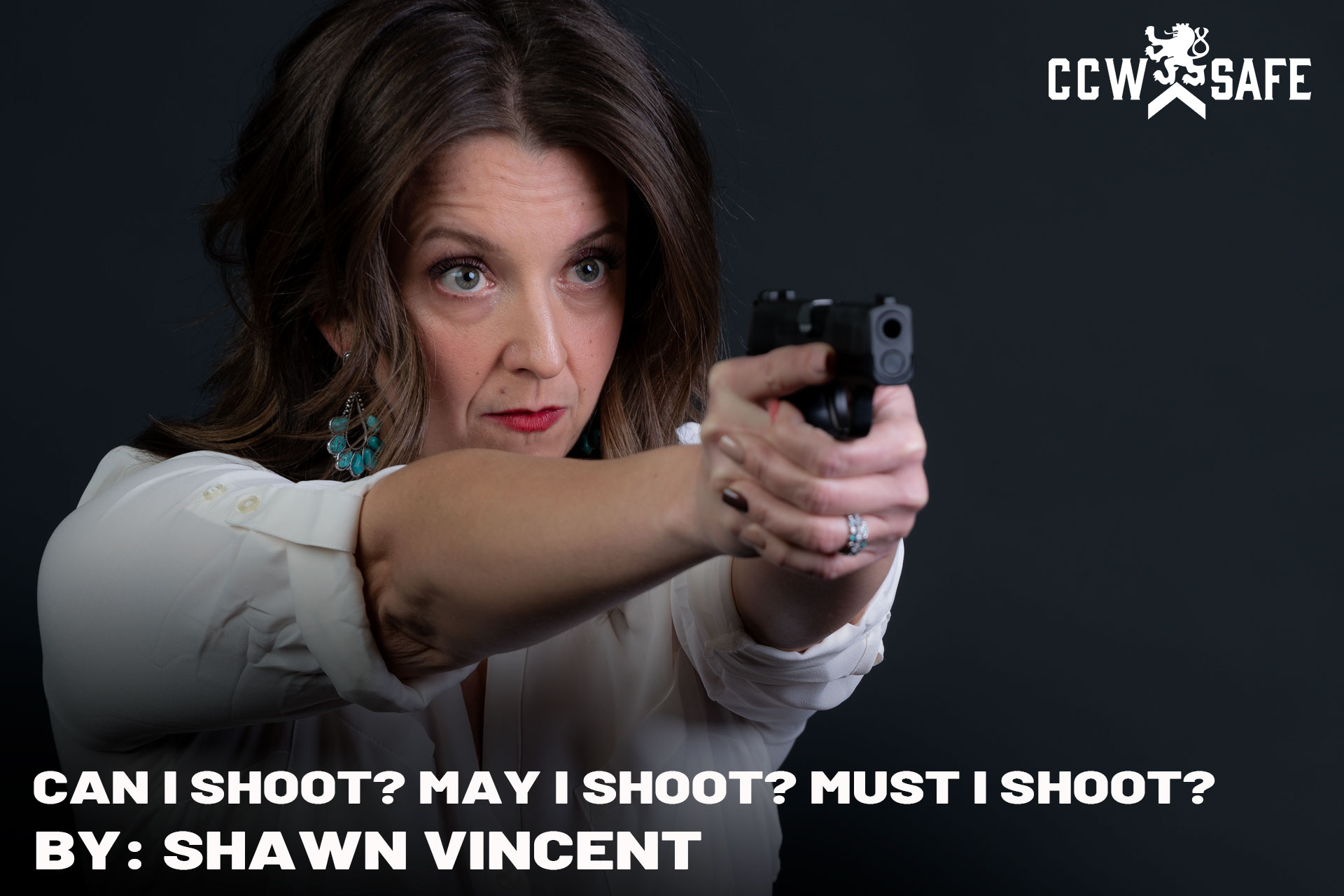 Posted on December 20, 2022 by Justin Collett in Shawn Vincent

Responsible concealed carriers understand the extraordinary legal consequences that can befall an armed defender who misjudges when the use of deadly force is justified. The legal standard is nuanced and highly subjective so, understandably, it leads many concealed carriers to ask the question “When can I shoot?” It is the wrong question. Firearms instructor Steve Moses endorses a self-defense mindset espoused by his colleague Lee Weems which involves asking three questions: Can I shoot? May I shoot? Must I shoot?

The “Can I shoot?” question is answered in the affirmative by any capable armed person, as the possession of a loaded firearm gives them the literal, physical ability to shoot. However, unless they are hunting, at the range, or defending against the imminent threat of great bodily harm or death, discharging a firearm is probably not legal.

The “May I shoot?” question is more complicated. In a self-defense scenario, the law affords the justification for using deadly force to a defender who has a reasonable belief that they face an imminent threat of serious bodily injury or death. Criminal defense attorney and National Trial Counsel for CCW Safe Don West says juries can apply both an objective and subjective assessment of a defender’s decision to use deadly force. The subjective assessment means the jury’s answer to the “May I shoot?” question might depend on the defender’s knowledge, experience, and relative physical abilities.

For example, a jury may be more inclined to forgive the use of deadly force when the defender is an old man, such as septuagenarian Curtis Reeves who resorted to deadly force when facing a much younger and more physically fit aggressor. Conversely, it means a third-party decider of fact may be less forgiving of the use of deadly force deployed by a Marine veteran and professional mixed martial artist, such as Gerald Strebendt, against a middle-aged, unarmed aggressor. In Reeves’ case, a movie theater patron towered above Reeves (who was seated) and began issuing threats and making aggressive gestures. In Strebendt’s case, the aggressor has just crashed into his car and was cursing, making threats, and advancing towards the armed defender, ignoring repeated warnings to back away. Both defenders faced a credible potential threat, but compared to Reeves, Strebendt’s circumstances and his combat training provided him with more alternatives to the use of deadly force.

The lawyers for both defenders argued that the law objectively allowed their clients a reasonable belief that their respective attackers intended harm, suggesting that the legal answer to the “May I shoot?” question should be “yes.” However, putting these questions on a spectrum, it becomes clear that Strebendt falls closer to “Can I shoot?” territory, and Reeves leans slightly more towards the “Must I shoot?” zone. Neither case was clear-cut. A jury ultimately acquitted Reeves, while Strebendt, aware of the challenges to his self-defense claim, pled to lesser charges and spent time in prison.

The “May I shoot?” question has a more defender-friendly answer in home defense cases. The law in most jurisdictions allows home defenders to assume that uninvited intruders reasonably pose a credible threat — especially intruders who make a forced entry. It means that for a defender who encounters an intruder in their home, the answer to the “May I shoot?” question is very often “yes,” provided the intruder poses a continuing threat. Nonetheless, there are plenty of reasons for an armed home defender to wait for a “Must I shoot?” moment before pulling the trigger. We’ve encountered tragic cases where a home defender mistook a beloved relative for an uninvited intruder with tragic results. We’ve studied several cases where the home defender mistook the intentions of a perceived intruder who was actually injured, drunk, high, lost — or all four at the same time. While the law may allow armed home defenders to assume intruders pose a credible threat, if the facts ultimately reveal that the intruder clearly meant no harm and posed no true threat, then the defender could face harsh legal judgment.

Charles Dorsey shot a man who forced his way through the front door of his home late at night. For several minutes, the shirtless, unarmed intruder had been knocking on the door, ringing the doorbell, and demanding to be let inside. Dorsey’s wife called 9-1-1 while Dorsey waited near the door, armed with a pistol. Eventually, the intruder became enraged and violently twisted the door handle. When the lock failed, the door opened. Dorsey fired a single fatal shot as the intruder crossed the threshold.

Dorsey had no way of knowing that the intruder was his neighbor’s highly intoxicated house guest who had, in the dark, mistaken Dorsey’s home for his host’s. Regardless, there were several opportunities during the minutes-long encounter where the defender could have realized that the man at the door was confused and disoriented. Ultimately, the intruder didn’t pose a true threat. It was a “May I shoot?” circumstance, not a “Must I shoot?” moment. Steve Moses says that Dorsey and his wife didn’t need to wait by the front door. Having already called 9-1-1, they could have established a more defensible position in an interior room of the house. In that case, when the intruder breached the front door, he likely would have realized he was in the wrong house and left. Had the intruded remained aggressive, ventured deeper into the home, and encountered the occupants, Dorsey could have deployed deadly force with more confidence that the intruder posed a true threat.

Charles Dorsey never faced criminal charges for his home defense shooting, but he did hire a lawyer to represent him during the weeks-long investigation. Firearms instructor Karl Rehn explains that there are “downstream consequences” in the wake of a self-defense shooting — even for armed defenders who escape criminal prosecution. In practically every self-defense shooting, the defender will become the subject of an intrusive investigation. In Dorsey’s case, the shooting made the news, and his reputation will always be affected by his involvement in a homicide. The intruder was a husband, a father, and a business owner with no criminal history. Even though Dorsey was legally justified, he’ll live the rest of his life knowing that he took a man’s life over a tragic misunderstanding. The psychological trauma armed defenders experience in the aftermath of a fatal shooting is often overlooked and underestimated.

Melinda Herman was working from home and caring for her twins when she was startled by a loud pounding at the front door. She ignored it, but when the banging stopped, she peeked out the window and, to her horror, she saw a man marching towards her house with a crowbar in his hand. Herman armed herself with a .38 revolver and ushered her children upstairs where she took a position behind the locked door of an interior room of the house. The intruder tracked her down, and when he breached the locked door, his intentions were clear. Herman fired all five rounds, striking the intruder four times in the face and neck.

If Charles Dorsey arguably faced a “May I shoot?” scenario, Melinda Herman unambiguously faced a “Must I shoot?” moment, and she answered correctly. While Dorsey endured a weeks-long criminal investigation and faced public scrutiny, Herman was exonerated the very same day, and the local Sheriff publicly proclaimed her a hero. Not every clear-cut “Must I shoot?” self-defense case will result in a speedy exoneration (most won’t), but as an armed defender, the more ambiguity you remove from the circumstances surrounding your decision to deploy deadly force, the better your chances are of avoiding both legal jeopardy and the “downstream consequences.”

Don West says prosecutors often try to debunk self-defense claims by suggesting that “the defender didn’t have to shoot or that they did so because they were angry, or that they could have avoided the fatal conflict by simply exercising reasonable judgment.” When armed defenders find themselves in a “May I shoot?” situation and attempt to de-escalate, avoid, or delay using deadly force, Don says those actions help “shut down those avenues that prosecutors like to go down to refute a self-defense claim.”

The lesson for concealed carriers and armed home defenders is that if you are asking the question “When can I shoot?”, then you are asking the wrong question. If you adopt a “Must I shoot?” mindset, then you’ll be much more likely to avoid potential self-defense shootings. If you are ever forced into a “Must I shoot?” moment, then you can deploy deadly force with much more confidence that your actions are legally justified.