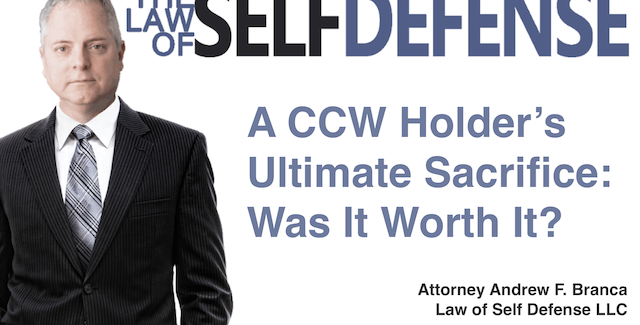 Posted on October 12, 2019 by Andrew Branca in Uncategorized

CCW Holder’s Ultimate Sacrifice: Was It Worth It?

CCW Holder’s Ultimate Sacrifice: Was It Worth It?

While I was teaching Law of Self Defense classes recently in Florida, a Chicago CCW holder, Derrick Gholston, was bravely acting against two armed robbers threatening victims in a local barbershop.  Unfortunately, in the exchange of gunfire that resulted Gholston was shot and killed. He leaves behind two young sons.

In our Law of Self Defense classes we urge our students and clients to consider whether intervening in a fight would still have been worth it even if the worst happens, by which mean either losing the legal fight afterwards or (even worse) losing the physical fight itself.

Before we dive into the substance of this post, the facts shared here are based on what’s being reported in the media about this event, specifically reporting by NBC Chicago 5 news:

A well-known area businessman who stood up to armed robbers and was killed in a shootout over the weekend is being hailed as a hero for his actions, which witnesses say saved over a dozen lives.

Derrick Gholston, who operated a food truck in Chicago, was making his rounds Saturday night when he stopped at a Roseland barbershop, according to authorities. Police say he was filling orders when two men approached, pulled out a gun, and demanded his property.

Authorities say that Gholston complied with the demand, but when the suspects went into the barbershop and announced a robbery inside, Gholston, who was a concealed carry permit holder, confronted them.

During the confrontation, shots were fired and Gholston, along with an 18-year-old suspect in the robbery, were both killed.

Gholston leaves behind two young boys, and friends are hopeful that they will grow up and know that their father died while trying to protect others.

The first point I’d like to make is that nothing in this post should be understood to be a criticism of Mr. Gholson’s choices or conduct.  No moral judgments about Mr. Gholston are being made here, and certainly his use of force in defending others against a deadly force threat was lawful.  I’m not suggesting that Mr. Gholston made the wrong decisions, did the wrong things, or deserved the fate that befell him.

Indeed, I’m not even questioning if Mr. Gholston’s sacrifice was worth it, as posed in the headline to this post.  Only Mr. Ghoston could really answer that question, and in his act of bravery itself, I suppose he did.

Rather, the purpose of this post is to encourage all of you to think about your own willingness to use force threatening situations, within the context of what the law deems permissible, and, perhaps most importantly, to engage in that introspection now, today, long before you find yourself tasked with making a life-and-death use-of-force decision in the midst of a threat.

Why now?  Because it increases your prospects for winning both the legal fight and the physical fight.

Superficial knowledge of these boundaries, however, is not enough, because it will not be actionable for you in a moment of crisis.  Your understanding of these legal boundaries must be robust and actionable. And that requires time, effort, and discipline, and perhaps most of all careful forethought and planning.

Or dumb luck. Anyone want to bet it all on luck?  Not me.

Now let’s think again about the legal fight. Being hard to convict doesn’t just happen because you’re a good person—almost all the cases I work on involve normal, law-abiding people just like us who have never before been charged with a crime, yet who suddenly find themselves looking at a felony conviction.

Being the good guy isn’t enough to avoid going to prison.  Rather, being hard to convict results from your effort in the weeks or months or years that preceded the moment of crisis.

Or dumb luck. Again, anyone want to bet it all on luck? Again, not me.

Most of us would probably agree that preparing to win the physical fight is much of the “fun stuff” of self-defense.  Shooting guns, training with knives, martial arts, learning how to optimally use pepper spray, situational awareness, and so forth—it’s all a blast (sometimes literally).

Learning the law? Good heavens, you might be thinking, that’s what lawyers are for!  If you find yourself in a legal jam, you’ll hire a lawyer to get you out of it.

Well, as a lawyer, I appreciate the vote of confidence. But here’s the catch:  We lawyers are stuck with the facts our clients give us.  Give us bad facts, and we’re going to have a bad case. Give us good facts, and we can help make you extremely hard to convict.

The facts, good or bad, come not from us lawyers, but from you, the client, and your decisions and actions in using force against another.  We don’t have a time machine that lets us go back and change what you did.

It is vital that you know enough about the boundaries of lawful use of force to give us good facts.  And that you possess that knowledge such that it’s actionable for you under stress.

There’s also an additional, perhaps less obvious, benefit to learning those use-of-force legal boundaries in an actionable way, beyond helping make you hard to convict and helping you win the legal fight.

It also helps you win the physical fight.

How?  By fostering your ability to make better informed, more confident, more decisive, and less hesitant tactical decisions in the heat of the fight ,precisely because you’ll know that you’re well within those legal boundaries.

Or, to put it another way, it helps you avoid what I call the zone of ambiguity.

Most of the cases I work on are “good guy” cases of self-defense.  These clients did not find themselves in legal jeopardy because they were on one of the extremes of the threat continuum. Obviously, when there’s no threat they just go about their day.  On the other hand, when the bad guys steps out of a doorway mere feet away with a raised machete, both the tactical and legal decisions are obvious.

Sometimes they use force too soon, before the legal conditions have been met, and are now looking at a serious felony conviction.

Sometimes they use force too late, in circumstances where there perhaps had been a genuine threat but after that threat had stopped, and by which time defensive force was not lawful.

Worse, these “too late” scenarios not only raise serious legal dangers, but also the risk of losing the physical fight, as well.  If you wait too long to act in self-defense, you might find that you’ve waited for the rest of your life.

An actionable understanding of the legal boundaries for use-of-force reduces uncertainty and hesitancy, increases clarity, and has the overall effect of narrowing that zone of ambiguity.  With less ambiguity the defender can make more confident, more decisive, and less hesitant use-of-force decisions.

And that increased decisiveness fosters your ability to win the physical fight as well as the legal fight.

If that all sounds really difficult, I’ve got great news:  Learning the legal boundaries of self-defense is simply not all that hard. I know that self-defense law can often appear to be a kind of mysterious “black box” full of legalese, one that defies understanding, but that perception is largely because of how poorly the media tends to report on, and how poorly too many instructors teach, use-of-force cases and principles.

In fact, self-defense law is really a puzzle with only five major pieces, what I refer to as the five elements of self-defense—and sometimes not even all of those five are needed, if one or more of those has been legally waived in particular circumstances.

And I have even better news than that—you can learn a lot of world-class self-defense law without spending so much as a penny.  That’s right—not one cent.

How? Simply by subscribing to be a Bronze-level member of my Law of Self Defense Blog.  Bronze-level membership costs nothing, it makes sure you’re alerted to our near-daily members-only self-defense law blog posts and videos, and it provides you with commenting privileges so that you can engage directly with both me and other members.

You can learn more about Law of Self Defense Membership, as well as access our most recent blog post and video for FREE, at http://lawofselfdefense.com/blog

Before we wrap this up, I’d like to make one more passing mention of Derrick Gholston, who lived as a hero, and sadly far too soon died as a hero.  May his two sons grow to know how brave a man their father was.

As mentioned, whether Gholston’s brave death was “worth it” is not really a question that any of us can answer on his behalf.  He made that brave choice, and he paid the ultimate sacrifice.  Whether that was worth it was his call, and his alone.

By the same token, however, you owe it to yourself—and to your family—to know to the greatest degree possible, before the moment of crisis, under what circumstances exposing yourself to the ultimate sacrifice, and perhaps having to actually make that sacrifice, will have been worth it.

What answers you come up with, and where you draw those moral lines, is a personal journey for you alone.  But you have a duty to yourself to begin that journey today, now, and not wait to ask such questions until the flag flies and the fight is on.

With that admonition, I’ll close with a final reminder:

You carry a gun, so you’re hard to kill.

Know the law, so you’re hard to convict.

Law of Self Defense CONSULT Program