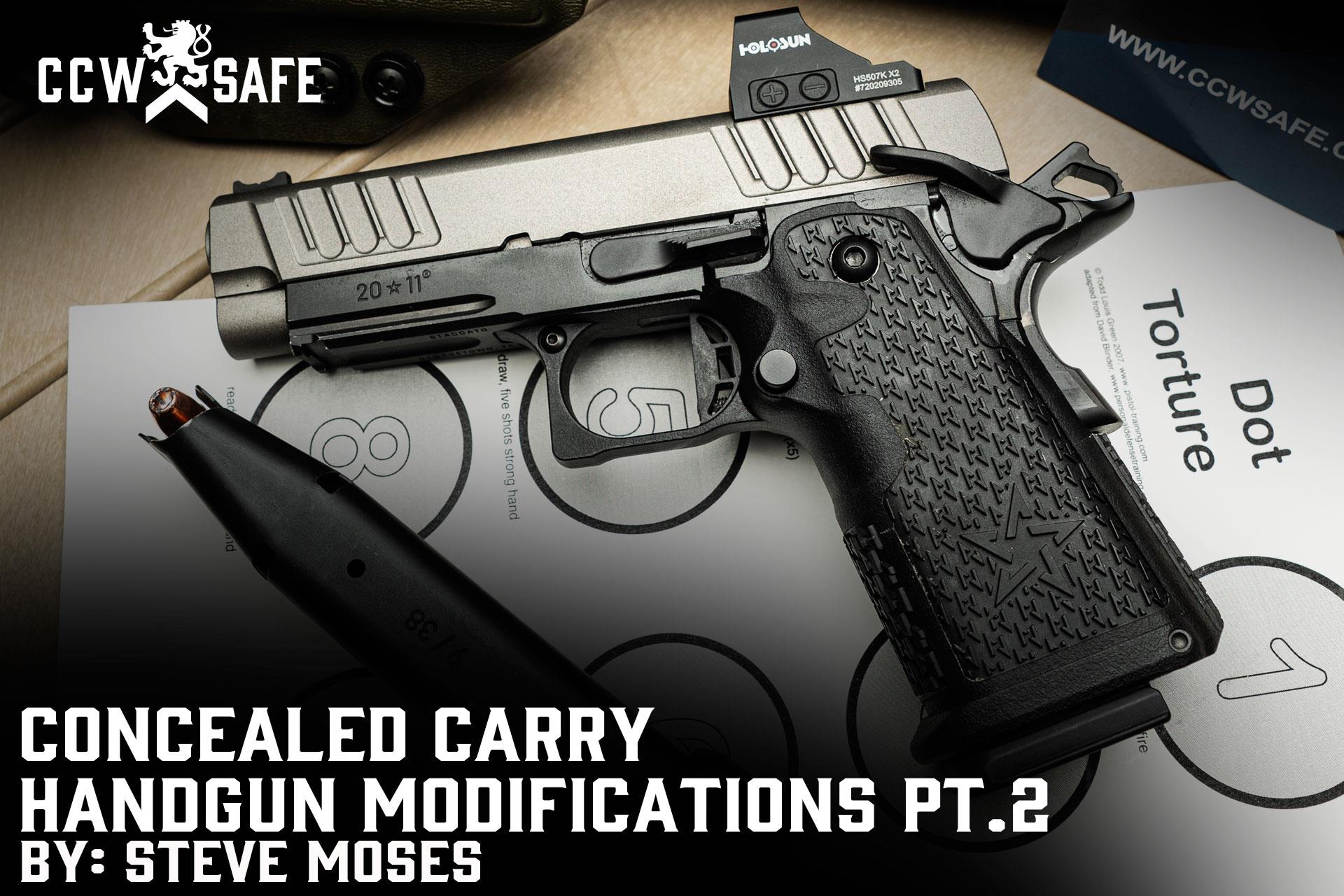 Posted on June 7, 2021 by Steven Moses in Training

A recent email from a CCW Safe member contained the following question: My question pertains to trigger manipulation and firearm enhancements. I have several M&P’s (on which) I have installed Apex Duty/Carry enhancement triggers in 9mm (and) .40, and a Shield .45. I’m wondering if installing enhancement devices gives a defender the appearance as “aggressive” in the event a bad situation occurred?

I opted to request the assistance of Shawn Vincent and Gary Eastridge. Shawn is a litigation consultant who helps select juries in self-defense cases and also manages public interest of high-profile legal matters. In Part One of this article, he closed with the following: If the modifications made are meant to make the firearm safer and more accurate, they probably will not have a material negative impact on how the jury perceives the weapon in the case of a trial. In my experience most reasonable modifications will have little impact on a case. However, if there is an issue with a case (and there usually is) that modification could change the perspective of an investigator or prosecutor tasked with reviewing the case and making a charging decision. I wouldn’t want any modification on my carry gun that may make a prosecutor think I was careless, indifferent, or looking for a fight.

Following are Gary Eastridge’s thoughts on concealed handgun modifications from the perspective of law enforcement’s examination of handguns taken into custody. He has over 35 years in law enforcement working on various levels.  He has personally been involved in shootings, has investigated shootings as a homicide investigator, and for 10 years was the chief investigator for the District Attorney’s Office in Oklahoma County.

Gary Eastridge: I avoid cavalier modifications or enhancements on my defensive firearms that are aesthetic. Your carry gun is to defend you and your loved ones. You don’t want your actions judged by a humorous saying such as “smile and wait for the flash”.  The police officer whose dust cover on his AR15 was engraved with an inappropriate saying comes to mind. Regardless of the facts of case, the dust cover marking made national headlines.  I would not add “Punisher” grips or anything that displays a callousness towards life. No “kill them all and let God sort them out” engraving.

Modifications that improve performance must be viewed from the view of a lay person, because that is who will be on the jury. If you are involved in a shooting your firearm will be examined by a law enforcement firearms examiner. If your trigger pull is substantially lowered, it will be noted. How that plays into a case can depend on how the case plays out. If you hurt a third party unintentionally your modifications could be powerful evidence of negligence.  This is just one more hurdle your attorneys may have to deal with.

For me personally I keep modifications to a minimum on my carry guns. This might include improved sights. If I have a trigger cleaned up, I will try to stay close to the stock pull weight.

Steve Moses: I would add that from a practical self-defense perspective, doing anything that might cause my handgun to malfunction at a time when my life is imminently at risk should be avoided as well as anything that might result in me missing my target. Enhancements that might result in either are usually those intended to decrease trigger pull weight such as aggressive stoning, or installation of lightweight springs or certain aftermarket triggers that are better used for recreational or competition shooting. Cartridge primers can vary in hardness, and a soft primer hit can result in a “click” when a “boom” was expected. Adding a compensator designed to reduce recoil and muzzle lift that works well on the range may induce a malfunction if the concealed carrier has an awkward grip or allows the handgun to “float” from the body. While this may be true for all semi-automatic handguns to some extent, I suspect that the combination of comped pistol and new shooter might prove to be less than ideal. At the risk of being called a hypocrite, I will admit that I had my gunsmith install a 15-pound trigger spring in my 15-ounce Smith and Wesson Airweight 442 .38 Special revolver because the trigger pull weight was so heavy that it was difficult for me to pull the trigger without moving the front sight off of the target. While the trigger pull weight is slightly lighter than factory, it is still heavier than that on the Smith and Wesson medium-frame and large-frame revolvers, and possibly twice as heavy as the factory trigger on a stock Glock 19.

Another concern that I have with light triggers is that the better semi-automatic handgun shooters know that to make multiple accurate hits on a small target at any kind of reasonable speed it is necessary to reset the trigger during recoil. In other words, as the handgun is fired, and the muzzle rises the shooter will release the pressure on the trigger to the point of full return and then take up the slack as the front sight (or red dot) settles on the desired target area ready to fire the next shot. There is some debate as to whether during recoil the trigger should be released fully and then slack removed, or just released to the point that the striker or hammer re-engages the sear. I know excellent shooters that do both. Regardless, it is entirely possible to reset the trigger so hard that it results in the handgun unintentionally discharging, and that errant round has to go somewhere. My belief is that a trigger that is significantly lighter than stock may result in the handgun being fired inadvertently under high stress. This can result in an outright miss that endangers others or a hit that indeed strikes the attacker after the same has acted in a manner that indicates that he or she has broken off their attack.

As Gary Eastridge stated, I have no problem with cleaning up the trigger if it exhibits “creep” (detectable trigger movement that does not cause the sear to release). I personally have no issue with high-quality aftermarket triggers if the trigger pull weight is not significantly lighter than stock if I am convinced that a law enforcement examiner or prosecutor legitimately believed that it had no material effect in what took place during a shooting. All of my Glocks have high-visibility aftermarket sights, and some of them have had their grips stippled in order to make them less likely to slide around in my hands if they are sweaty or wet. I would defend my choice by claiming that many handgun manufacturers are now offering handgun models that have similar (or exactly the same) high-visibility sights and more aggressive texturing on the grips (as evidenced by the current Generation 5 Glocks).

In summary, I think that all three of us agree that it is best to avoid any modification that makes a handgun unsafe, demonstrates a callousness towards human life, increases the odds that a handgun could malfunction, or causes an inadvertent discharge.