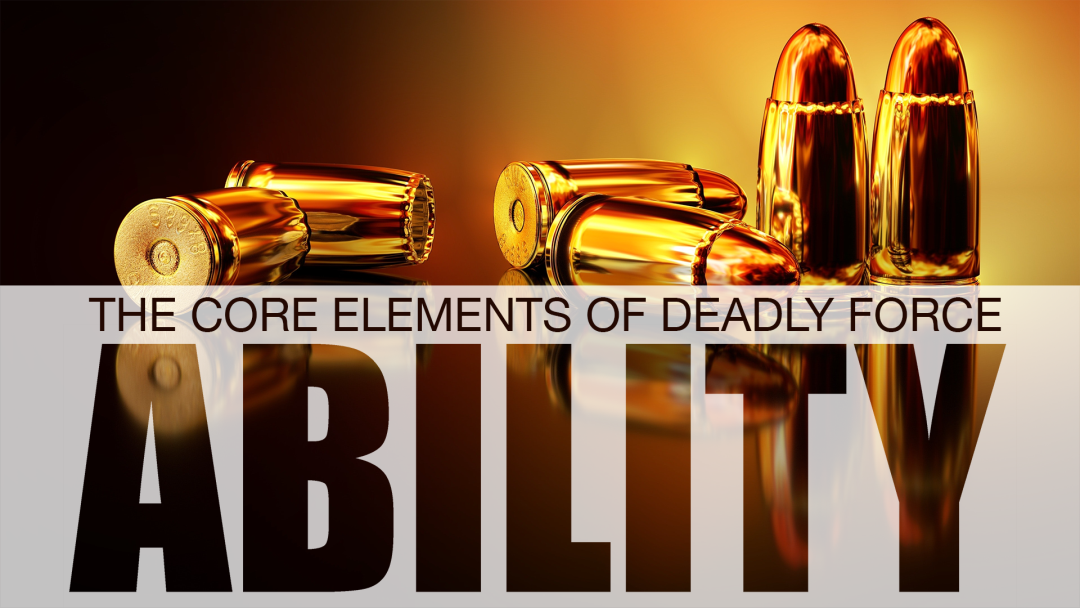 Posted on November 5, 2018 by Steven Moses in Training

In a recent article entitled “But All I Had Was a Hammer”, we discussed the danger of unlawfully brandishing in a situation were other options were readily available.  In a recent podcast, I discussed the difference between being a willing participant and reluctant participant to a confrontation, and the importance of assessing Ability, Opportunity, and Intent prior to responding with force to a perceived deadly threat. This article will address the role that Ability plays.

I go to considerable effort to avoid engaging in any activity that might contribute to a heated exchange with another party, especially while driving. Having said that, I found myself indeed engaged in a confrontation in 2009.  An angry driver followed me into a Jimmy John’s deli and attempted to corner me at the soft drinker dispenser.  He did the whole angry alpha monkey posturing act where he got within about three feet of me, leaned forward, made direct eye contact, stood as tall as he could, spread his arms out so that he appeared larger, and started voicing his displeasure. I simply brought my hands up to chest level, took one forward at a 45-degree angle, squared my hips to him, and told him that it would be best if he calmed down. I did not engage in any further verbal exchange except to occasionally say “just calm down”, and mostly just watched him. He apparently did not like what he saw, as he then disengaged and walked away while speculating loudly that my parents had never been married.

He was larger and younger than me, and there was no question in my mind that he could have seriously injured me with a punch, or perhaps had a knife or gun concealed under his shirt. However, I believed that at that time he lacked the ability largely because of my own prior training, and I was confident of my ability to see and respond to anything he might have done under the exact circumstances. Previously, I had taken multiple close-quarters contact defensive skills classes under Craig Douglas and studied Jiu Jitsu, Tae Kwon Do, and Filipino knife fighting, and I believed that I possessed the skills needed to buy enough time to either overcome him or disengage from him far enough to then access the Glock 19 that was on my person at the time.

I would absolutely be the first to say that looks are deceiving and it is hazardous to under-estimate others based upon appearance alone.  One of my students is a 135-pound female UFC fighter that could destroy me with her just her hands, feet, and elbows.    So that then the question becomes: how do we judge ability? The best advice that I can probably give is based upon statistics derived from the FBI Uniform Crime Report regarding the crime of Aggravated Assault.  One of the biggest differences between the crimes of Murder and Aggravated Assault is that people do not immediately typically die from Aggravated Assault. One of the reasons for this that emergency medical care has never been better, and doctors and nurses are saving people in 2018 that would have possibly died in 2008.

According to the 2017 FBU Uniform Crime Report, there were an estimated 810,825 Aggravated Assaults in the United States. The report went on to state that 26.3% were committed with firearms, 25.4% were committed with hands, fists, or feet, and 17.2% were committed with knives or other cutting instruments. Handguns, knives, fists and feet, and blunt objects are used at distances usually measured in mere feet, and successful use requires a clear pathway between the attacker and intended victim. This suggests that the concealed carrier’s ability to manage distance and successfully employ barriers may greatly diminish the abilities of the attacker to cause serious bodily injury and death.  Having said that, the concealed carrier should remember that any attack is a fluid situation, and any protections afforded by distance and barriers can quickly dissolve.

Most reasonable concealed carriers should be able to spot others who may possess apparently obvious superior physical attributes, greater numbers, and openly carried weapons.  However, a physical response to that is not warranted unless both opportunity and intent are also present.  At the risk of being overly redundant, managing distance and using barriers to block pathways accomplishes three things:

Our next article in this series will cover the role that Opportunity plays in assisting the concealed carrier in making decisions that may have serious future consequences.