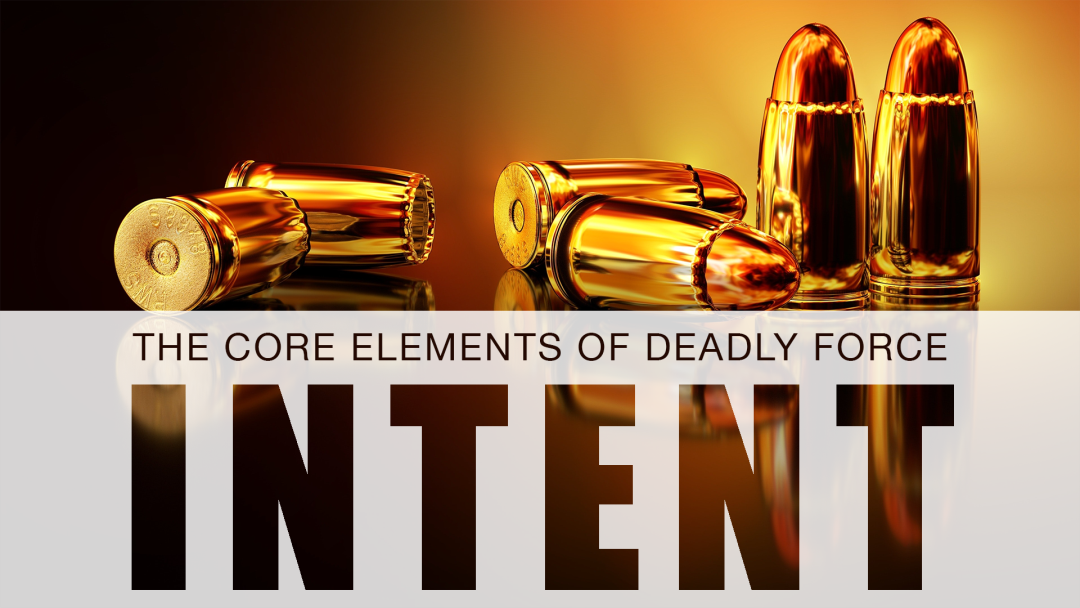 Posted on November 19, 2018 by Steven Moses in Training

When it comes to self-defense, Intent might be defined as the firm resolve to commit an action which may result in serious bodily injury or death to a third person. In prior articles, we set out three core elements of an attack that should be present before a self-defense response is legally warranted, which are ability, opportunity, and intent.  Of the three, intent may be the most difficult to judge.  Any normal police officer, concealed carrier, skilled boxer, or martial artist we are around most likely possesses both ability and opportunity at some time.  None represent any true danger to other persons since they lack the intent to harm or kill others.

Intent is an element that may be extremely difficult to ascertain.  Communication between two parties is done through verbal and non-verbal messaging.  Verbal communication will most likely consist of speaking, volume, and tone, and non-verbal communication will most likely be based upon eye contact, appearance, body language, distance, and touch.   Most people rely far more on the messages contained in non-verbal communication than verbal. Most people are unable to control their non-verbal cues all of the time.  Even so, professional criminals are often quite skilled at masking their intent, and many are quite capable of closing distance and then unexpectedly launching an attack. Angry persons, especially those under the influence of alcohol, may lack any intent whatsoever of physically attacking another, but their words, tone, volume, and body language may indicate otherwise. For the average concealed carrier,  correctly identifying the true intent of another person is often extremely difficult.  In the event of a sudden attack, our reaction time to an unanticipated stimulus of as much as .75 seconds or more affords the attacker a significant advantage.  This is often referred to as “reactionary lag”.

All is not lost.  The concealed carrier can often remove significant ambiguity by attempting to create distance, moving behind a barrier, or both. Do not allow an agitated person to close distance if possible even if it means leaving the area immediately. If accosted in public where there is nowhere else to go, tell the person that you can’t help them and keep moving. Politely ask them to stay back once if they persist, and be prepared to advise them loudly and firmly a second time if necessary.  Rather than move straight back, it is probably better to move forward at 45 degree angle off one of their shoulders (being right-handed, I choose their left shoulder).  I highly recommend keeping your hands either at chest level or somewhere between belt and chin in case a punch is thrown. I do not worry too much about looking into their eyes, as to the best of my knowledge no one has ever been injured or killed by a look. I do look at their chest, which allows me to pick up on pre-assault body shifts, any weapons they may have in their hands, or observe the flare of an elbow that might suggest that they are reaching for a weapon stowed in the beltline. But, before I rock my Glock, I need to check off all three boxes.  Does the person appear to reasonably have the ability, opportunity, and intent to severely injure or kill me?  Sometimes we have very little time to correctly assess the situation and arrive at a conclusion. I am unable to sufficiently describe the value derived from training. The ability and confidence derived from taking a close-quarters self-defense class addressing situations like this is priceless.  I routinely run students through drills in our Brazilian Jiu Jitsu school that have great application in the streets (and no application in sports).

In summary, the concealed carrier might well be served in having a firm understanding of the importance of ability, opportunity, and intent when it comes to preparing for the day we all hope never comes.  If there is no other option than the use of lethal force, then I encourage the concealed carrier to use surprise, speed, and violence of action to defend themselves and possibly their loved ones.  Just remember that this does not always mean that shots must be fired. There are legitimate circumstances when presenting a handgun with a warning that it will be used if necessary is acceptable if all three boxes have been checked and the use of deadly force warranted.