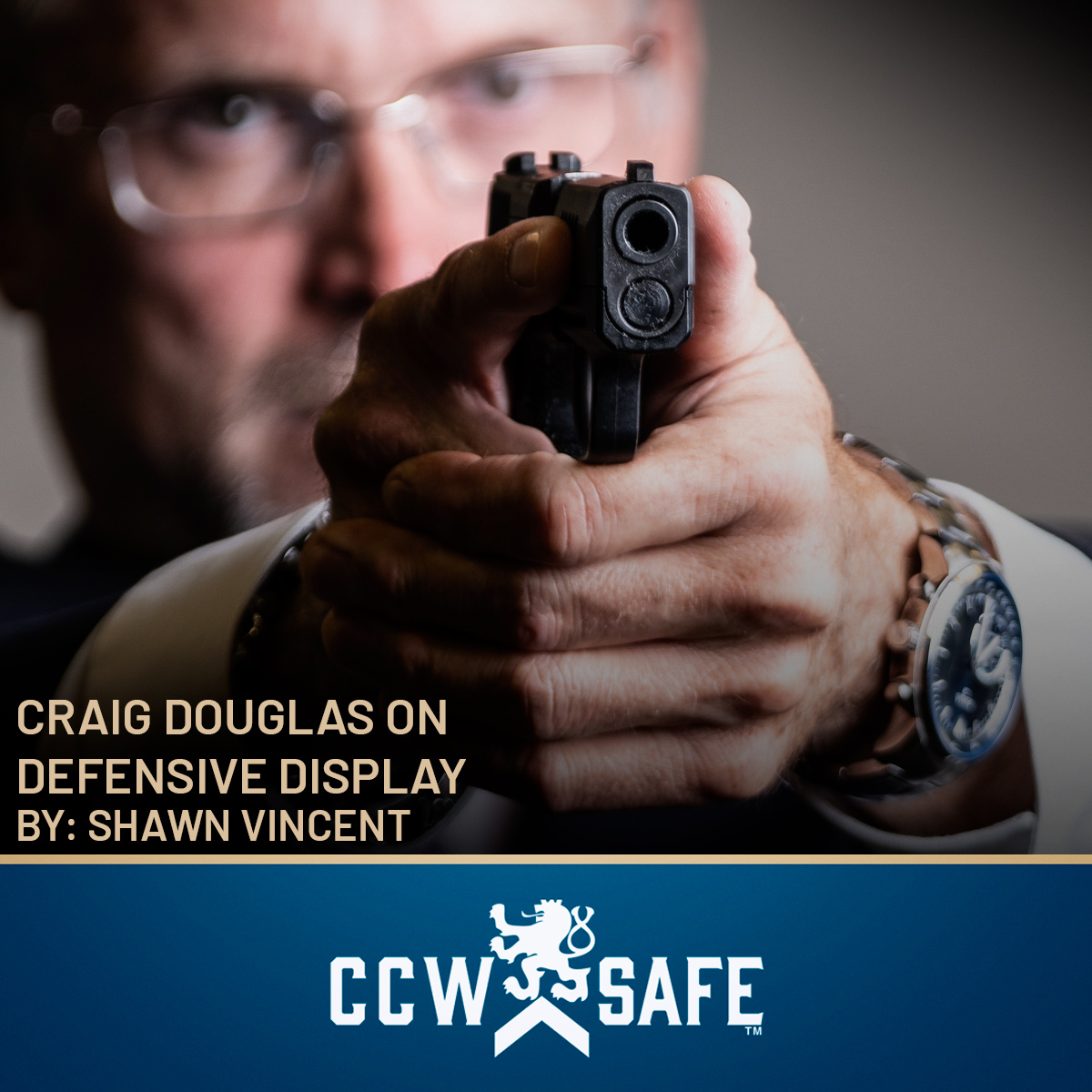 Posted on August 12, 2022 by Justin Collett in Shawn Vincent

“I have no idea how many people I’ve pointed guns at in my law enforcement career that I didn’t fire on,” Craig Douglas says. Craig’s 21-year law enforcement career included service in a narcotics unit and two years spent undercover. During that time, he encountered countless dangerous criminals. “If I point a gun at someone,” Craig explains, “I’m most assuredly comfortable with shooting them. I’ve just chosen for the moment not to.”

What Craig is saying is that, in the course of his law enforcement career, he has faced the threat of great bodily harm or death on multiple occasions, and during the process of deploying deadly force – during the shooting cycle – the attacker responded in a way that allowed Craig to interrupt the cycle and choose not to shoot when the attacker de-escalated at the sight of the firearm. Craig refers to the act of displaying a firearm without actually firing the weapon as a “tap on the breaks.”

To be clear, an unjustified defensive display of a firearm is a serious crime. While laws vary from one jurisdiction to the next, unjustified defensive displays can be charged as brandishing, assault, assault with a deadly weapon – or several other criminal charges that carry the risk of significant time behind bars. Nonetheless, criminal defense attorney and National Trial Counsel for CCW Safe Don West stresses that any criminal consequences related to a defensive display are generally “light years” less severe than the consequences of unjustifiably discharging your firearm – even if no one is harmed or killed.

There is a lot of subjectivity involved in the legal justification of defensive displays. Defenders who deploy a defensive display during circumstances that would have otherwise clearly justified the use of deadly force assume less legal risk than defenders who present a firearm in more ambiguous circumstances – say against a seemingly unarmed defender. It may be easier to justify clearing a cover garment and gripping a pistol than to explain the need to draw to a low-ready position. Pointing a gun at someone (which is much more serious than just a defensive display) requires significantly more justification.

Sheri McClatchy was an attendant at a laundromat in Mississippi when an angry patron attacked her, wrestling her to the ground. McClatchy managed to break contact and retreated to her car where she retrieved a pistol and called 9-1-1. Security camera footage shows the angry patron attempt to reengage McClatchy, who holds her pistol in a low-ready position, pointed at the ground. When the angry patron moves closer, McClatchy raises the pistol causing her attacker to retreat. She never fires. Don West notes that the use of deadly force may not have been legally justified against an unarmed attacker in this particular situation, nonetheless, it’s clear McClatchy’s defensive display thwarted a second attack without a single shot, and she ultimately faced no criminal charges.

Michael Drejka was also attacked in a parking lot, but his encounter ended much differently. Drejka had started an argument with a woman who had parked in a handicapped parking spot, and he didn’t notice her partner Markis McGlockton as he swiftly approached and shoved Drejka to the ground. From a prone position, Drejka drew his pistol and pointed it at his attacker. Surveillance footage shows McGlockton taking a couple of steps backward upon sight of the gun. Like in Sheri McClatchy’s case, the presentation of the firearm served to interrupt the attack, but unlike McClatchy, Drejka completed the shooting cycle, firing one fatal round that pieced McGlockton’s heart. A jury found Drejka guilty of manslaughter and a judge sentenced him to 20 years in prison. Had Drejka not fired, he likely wouldn’t have faced charges for simply pointing the weapon at his attacker.

As a criminal defense attorney, Don West says the most common call he receives from people facing criminal charges related to self-defense incidents involves the defensive display of a firearm. Many of those charges come as a result of the defender presenting the weapon before the threat posed by the attacker rose to the level that would justify a defensive display.

Firearms instructor and CCW Safe contributor Steve Moses suggests some concealed carriers may draw their firearms too early because they are not confident in their ability to quickly deploy their weapon in a moment of crisis. Training is key. A concealed carrier should feel comfortable in their ability to quickly clear a cover garment, establish a grip on the pistol, and safely draw the firearm.

When the aggressor is unarmed, as in the McClatchy and Drejka cases, the defender may need to draw in close proximity with an attacker, which means the attacker could potentially wrestle control of the gun away from an inexperienced defender. Steve says that in Craig Douglas’ Extreme Close Quarter Concepts (ECQC) training class, students learn how to safely draw and fire when the attacker is within arms reach.

In a recent podcast about managing unknown contacts, Craig Douglas taught us that we can potentially avoid physical conflict by developing our verbal skills, and we can project more confidence during a confrontation by having at least some exposure to martial arts or contact training. The confidence of knowing how to survive a physical blow combined with being competent at drawing a weapon from a retention position gives an armed defender more options when managing an unknown contact. Craig says all these skills contribute to an interdisciplinary approach to self-defense.

The lesson for concealed carriers is that adopting an interdisciplinary approach to self-defense and developing verbal skills and martial arts abilities – in addition to competent gun handling – gives you more options when navigating ambiguous encounters with unknown contacts. Some of the most tragic self-defense cases we have studied involve good-intentioned armed defenders that go to the gun either too soon or too late during an encounter with an unarmed attacker. We call this the “armed defender’s dilemma.” The skills Craig Douglas teaches can help armed defenders solve this dilemma and survive a violent encounter without facing serious legal consequences in the aftermath – especially if they can articulate how they used their training to identify the nature of the threat and to mitigate the confrontation before resorting to deadly force.