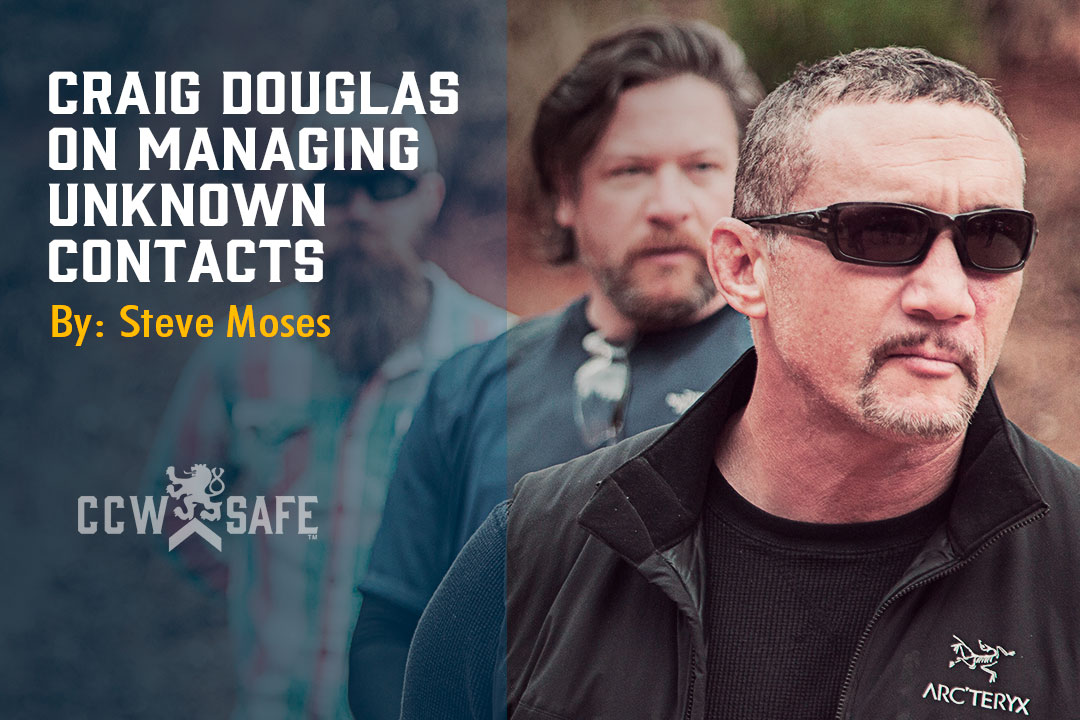 When it comes to street crime, Craig Douglas (AKA “Southnarc”) is a pioneer in educating students on the importance of pre-engagement tactics and consistently maintaining sufficient distance from an unknown contact so it becomes more difficult for a violent criminal actor to close the gap and successfully execute an assault.

Craig is well recognized throughout the defensive training industry for his expertise in integrating multiple disciplines into a codified self-defense system that is largely based upon lessons learned from 21 years of law enforcement with the majority of his career spent in SWAT and narcotics.

As a long-time student of his (my first class with him was about 15 years ago), I have attended his Extreme Close Quarters Concepts, Vehicle Combat Shooting and Tactics, and Armed Movement in Structures courses and the amount of knowledge that I have picked up from him is incredible. Craig’s programs are constantly evolving, and I recommend that concealed carriers check him out on YouTube videos and internet reviews followed by taking a class from him or the other trainers that are part of the Shivworks Collective.

This particular article focuses on one of the most critical components of his foundational Extreme Close Quarters Concepts, which he refers to as Managing Unknown Contacts (“MUC”).  MUC is a multi-dimensional system of interacting with strangers or others of questionable intent that may or may not be a potential threat by using a consistent methodology designed to both reduce the chances that a physical attack or altercation ensues and sets the student up for success if it indeed gets physical.

As an undercover narcotics officer, Craig frequently had to talk his way out of bad situations and was robbed and assaulted multiple times. He began studying not only the videos of these assaults on him whenever possible but the assaults on other undercover narcotics officers. Douglas paid careful attention to how violent criminal actors would close upon their intended victim, and how they  almost always involuntarily manifested at least three kinesthetic “clues”, which were Grooming (movements of the hand around the head, face, and neck thought to perhaps be an attempt to mask deception), Target Glancing ( looking left, right, or even behind them possibly to see if there are witnesses or someone else that might interfere), and Discernible Weight Shift (increasing traction in order to either punch or launch forward).

Craig believed that there was a disconnect between what was being taught in the self-defense community and what actually occurred during most violent street crimes. The importance of awareness has been stressed for nearly 50 years by such greats as Colonel Jeff Cooper of Gunsite Academy fame, but the details were lacking when it came to how exactly men and women should physically accomplish this in the real world where it is not uncommon to be around strangers on a constant basis.

Douglas then set out on a journey to develop a codified program of teaching students how to better manage unknown contacts in a consistent manner. A consistent manner of managing an approaching stranger allows us to maintain space, look for anyone else who may be a potential threat, and assess the environment.

Craig Douglas said that he was influenced by the teachings of Geoff Thompson, a well-known martial artist, film-maker and nightclub doorman in England. Thompson wrote a book entitled “The Fence” which specifically addressed the importance of pre-fight psychology and detailed instruction on how we can physically position ourselves so that we can respond more effectively if faced with a potential threat.

Craig’s time spent as an undercover narcotics officer buying illegal drugs often put him into the position of being “ripped off” (also known in concealed carrier vernacular as robbed). Craig is a long-time martial artist whose background includes Tae Kwon Do, Filipino Martial Arts, and Brazilian Jiu Jitsu, but none of those arts work very well if a street-smart criminal throws a sucker punch inside of arms-length distance, especially from the side or back.

To that end, Craig felt a default position that protected the vulnerable portions of the head and neck was needed regardless of the angle from which a punch or strike or thrown. He started with Tony Blauer’s SPEAR system and then added tweaks and refinements until he developed his own default position that he now refers to as Default Cover. Pre-emptive strikes are employed in MUC under a very limited set of circumstances, and even then the primary objective is to regain distance or create an opportunity for escape.

Three primary components of MUC are how we move, what do we do with our hands, and what we say.  The importance of always maintaining enough distance to perhaps dissuade a potential attacker or provide sufficient time to physically respond in an effective manner to a sudden assault cannot be over-emphasized. Craig believes that we should always maintain a minimum distance of one foot beyond the wingspan of the approaching stranger.

He teaches the use of verbal agility based upon the other’s actions and not their appearance, race, gender. If approached by a stranger who might be genuinely benign that asks if they could talk to him for a minute, his response would be something like: “I will be glad to talk to you if you stay over there”. This is an example of qualified cooperation. If the stranger agrees but keeps moving forward, then something less benign may be happening that causes him concern.

Douglas is a huge advocate of keeping his hands up and moderately extended while managing an unknown contact. Not only does this act as a deterrent but it is a critical part of being able to assume the default cover position quickly enough to protect the head and neck. Craig will not stop moving during an initial encounter with an approaching stranger, but instead will move in an arcing motion to his 3:00 position or 9:00 position.

This reverse flanking motion is not typical of the ordinary “victim”, and it allows him to now use his peripheral vision to scan his own flanks for other potential threats without turning his head away from the initial contact. Douglas said that almost every time that he got sucker punched it was when he was distracted and unaware of what was happening to the side or rear.

Craig Douglas summed his MUC program by saying that it is largely an adult version of the “Stranger Danger” program taught to children. Under no circumstances should we walk around thinking that potential threats are lurking around every corner, parking lot, or gas station. That is likely not conducive to good mental health. A better approach is to do our homework, have a solid plan in place that is based up consistent responses for managing unknown contacts, be aware of what is going on around us especially in areas where the likelihood of encountering strangers is significant, and then default to our plan when contact occurs. I have used Craig’s method of MUC literally dozens of times when I lived in East Dallas for two years and it works.

What happens in a worse case scenario? Craig teaches that also, and he is an incredible teacher when it comes to teaching the In-Fight. Concealed Carriers are well advised to study his approach to dealing with violent crime at the distances and under the circumstances it mostly happens.