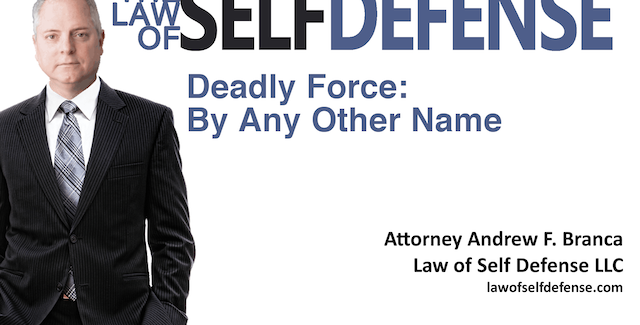 Posted on November 9, 2019 by support@ccwsafe.com in Uncategorized

Deadly Force, By Any Other Name

Deadly Force, by Any Other Name

A couple of funny use-of-force stories came across my desk this past week, both involving unusual means of using deadly defensive force.  So, let’s dive right in.

Most of us who CCW (and, hopefully, that’s most of us, period) tend to think of our handgun as our primary deadly defensive tool of choice, perhaps backed up by a fixed or folding bladed weapon. (I also urge, of course, having accessible a non-deadly means of self-defense, such as OC spray.)

The stories that prompted this post, however, had nothing to do with either guns or knives, and that’s what makes them notable.

The first story involved a woman who used a crossbow in purported self-defense against a neighbor, actually firing a bolt that caused some modest injury to the neighbor.  (And, no, I’ve no idea if this woman is related to Daryl Dixon, of The Walking Dead fame.)

The second story involved a car driver who was attacked by a total of five aggressors.  None of the aggressors appeared to be armed, but it’s not hard to infer a deadly force threat from an attack where the disparity of numbers is five against one.  In this case the driver actually used their car as a weapon, literally bowling over the attackers.  One attacker managed to get run over by both the front and rear wheels of the car, only to hop up and run away.  (They just don’t’ make cars like the used to, I guess.)

In neither case did anyone appear to be seriously hurt, including the defenders, which is all to the good.

These stories did remind me, however, that it’s common in the classes I teach for folks to conflate two very different concepts within the context of self-defense law:  first, the degree of force involved in the fight—deadly force or non-deadly force; and, second, the particular means of inflicting that force—the particular weapon used.

While there is a considerable degree of apparent overlap between degree of force and weapon used, they’re not literally, or legally, identical concepts, and treating as if they were identical only confuses legal analysis and understanding.

For use-of-force law purposes, all force is essentially placed into one of two buckets.

The non-deadly force bucket includes all lesser degrees of force, meaning force that is not readily capable of causing death or serious bodily injury.

Because there is a continuum of degrees of force within the non-deadly force bucket, and because lawful self-defense requires that our defensive force be proportional to, and not excessive relative to, the attacking force, we must take care to maintain proportionality in a non-deadly force confrontation.  A proportional response to someone poking you in the chest with their finger, for example, might well be physically swatting their hand away—it’s probably not, however, immediately giving them a face full of OC.

Once we get to the deadly force bucket, however, we’ve left the context of a continuum of force, because we’ve reached the limits of that continuum.  In terms of intensity of force there is no “lesser deadly force” or “greater deadly force.”  It’s deadly force, period.  A shotgun blast to the face is not a greater deadly force than a baseball bat to the skull—they are both forces that are likely to cause death or serious bodily injury, and if used in self-defense both would have to meet the same legal threshold for justification.

Indeed, assuming that the conditions for the use of deadly force in self-defense have been met, the law doesn’t much particularly care what the specific means of deadly force is, so long as it is consistent with the legal privilege of stopping that imminent deadly force threat against an innocent.

I mention “consistent with stopping the unlawful threat,” because there exist means of deadly force that would not be well-suited to stopping an imminent threat, even if deadly defensive force was otherwise justified.

Stumble upon an apparent armed robbery, and you may be legally privileged to go to your gun to stop a deadly force threat. If instead, however, you decide to inject the robber with a slow-acting deadly poison—well, you get the idea,. Even though deadly force may be justified, a slow-acting poison just doesn’t look much like self-defense because it’s not effectively neutralizing the imminent threat.

I feel obliged to note that even where the black letter law might allow for a very broad privilege to use almost any variety of deadly defensive force in a deadly force self-defense scenario, the use of apparently bizarre methods of defense nevertheless carries risks—most risks of the narrative form.

Any Item Can Be A “Deadly Weapon”

It’s common for weapons law to enumerate specific items as “deadly weapons” and then either prohibit their possession or carry in public or require specializing licensing for possession or carry.  This can apply to guns, knives generally, knives only over a certain blade length, knives sharpened on both edges, automatic knives, brass knuckles, billy clubs, saps, nun-chucks, and all kinds of other items designed for use as weapons.

In the context of use-of-force law, however, a deadly weapon is not so narrowly defined.  It’s true that some items, such as guns or knives, when used in their intended manner, might be treated by the courts as deadly weapons as a matter of law for use-of-force purposes.

The truth, however, is that virtually any item can be a deadly weapon for use-of-force law purposes, even if it doesn’t qualify as such for weapons law purposes.  All that matters for use-of-force purposes is whether that particular item was used in a manner that made it likely to cause death or serious physical injury.

A more subtle example:  to my knowledge a shoelace that’s being used in its intended manner, on your shoe, is clearly not a deadly weapon.  Wrap that shoelace around someone’s throat in a manner likely to cause death or serious bodily injury, however, and now it’s manner of use does indeed make it a deadly weapon for use-of-force law purposes.

The same is true of a plastic shopping bag, a tree branch, a rock, even one’s bare hands—if it’s being used in a manner likely to cause death or serious bodily injury then it is being used to inflict deadly force and, for use-of-force law purposes, it is being used as a deadly weapon.

(Things can get a bit more technically ambiguous when we start conflating use-of-force law and weapons law—for example, when a particular crime has as an element the use of something that would be recognized as a weapon under weapons law, or in the context of sentencing enhancements based on the use of an actual weapon, but that’s beyond the scope of today’s post.)

That’s about all I have for today’s post, but before I depart I did want to make the CCW Safe community aware of some free information we’re making available at Law of Self Defense.  As many of you might know, we approach use-of-force law using a framework of five legal elements—innocence, imminence, proportionality, avoidance, and reasonableness.

Well, there’s good news:  Law of Self Defense has put together a single-page infographic that sets out these five elements and provides concise definitions of each, as foundational information that’s essential to take even the first step along the journey to genuinely understanding self-defense law.

We’re making this infographic available at absolutely no cost, whatever, so I strongly encourage you to grab your copy as a handy reference.  You can do that by simply pointing your browser to:

(If you’re a self-defense  instructor, we also plan to offer this “five elements of self-defense law” infographic in poster size, suitable for display in a classroom, so keep your eyes open for that.)