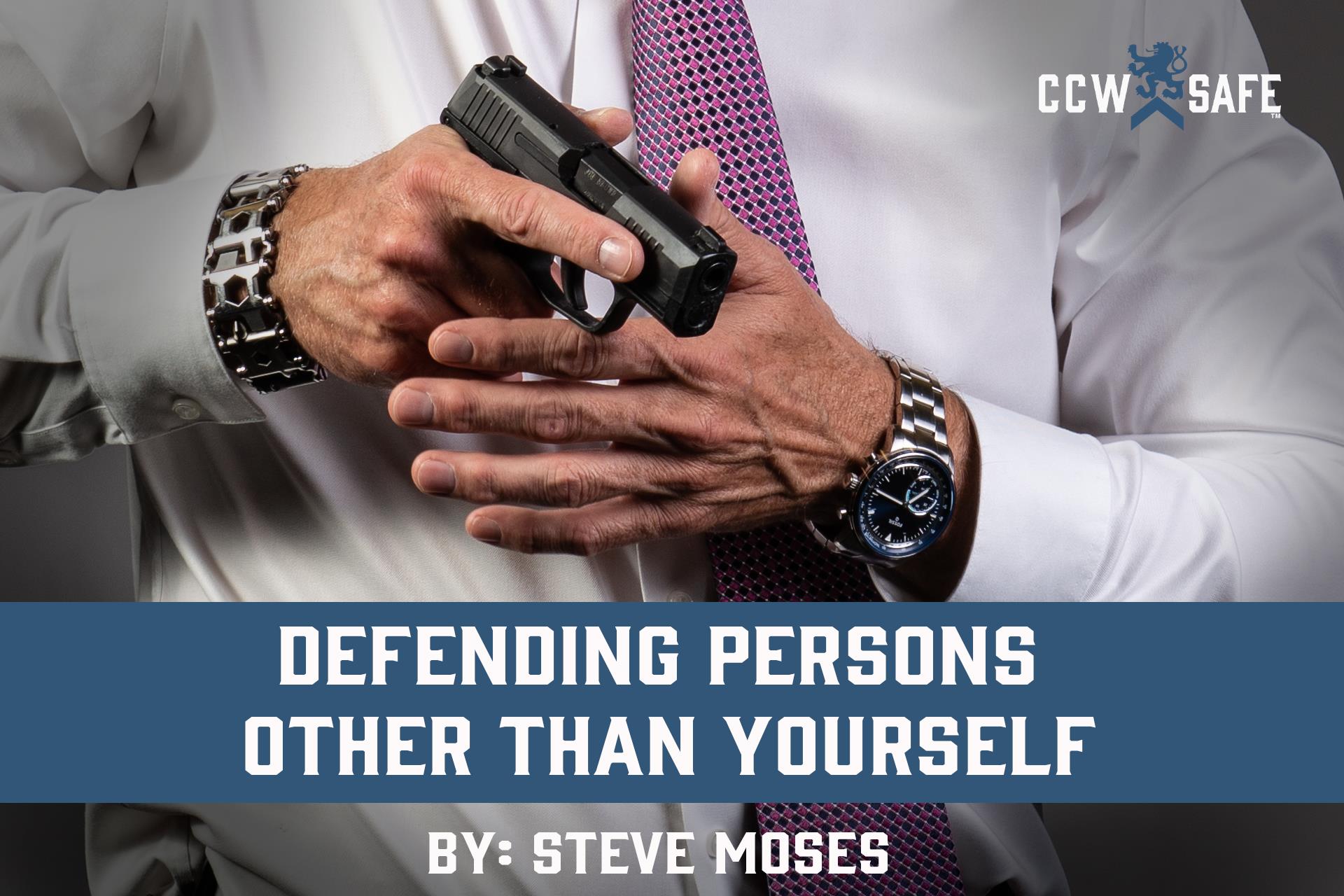 Posted on October 26, 2020 by Steven Moses in Training

DEFENDING PERSONS OTHER THAN YOURSELF

DEFENDING PERSONS OTHER THAN YOURSELF

“I enjoy reading all the news articles. I am a CCW holder in MA & RI. Most articles revolve around home self-defense. Please add an article/discussion regarding self-defense of others, i.e., stopping a sexual assault, attack on another in a “not your home” environment. “

Actually, most of the articles that I write do not primarily address home defense. I attempt to stay abreast of current events and anticipate some of the ongoing concerns of concealed carriers and armed homeowners. The subject of recent articles were road rage, home intrusions, street encounters with agitated protesters, dealing with moving mobs in which there was a high likelihood of violence-prone individuals, and driving only to have to your vehicle surrounded by persons threatening violence. Ither articles that have I recently written discuss the definition of “serious bodily injury” and why it might be important to understand and what the term “forcible felony” might mean and why it matters.

What pleases me about the above request is that not only does it bring to my attention concerns this person and most likely others have about acting on behalf of others but also is proof positive that CCW Safe members are typically well-informed gunowners who want to avoid trouble, and if forced to defend themselves or others to do everything morally and legally correct.

Per the Texas Penal Code, Defense of third person, 9.33, “force or deadly force is justified against another to protect a third person if

Texans would definitely want to read the entire code, including Articles 9.31, 9.32, and 9.34 rather than rely solely on Article 9.33 above. Persons who live in other states need to read the appropriate laws addressing use of force to protect third persons in order to be fully informed.

So, what does this most likely mean to concealed carriers? In my opinion, I can use the appropriate level of force to protect my family and other persons that I know (and trust) in the event that they were threatened with injury, serious bodily injury, death, or the intended victim of a forcible felony.

When it comes to defending third persons that I do not know, my opinion is that things become considerably murkier. Do I know all of the players involved? Am I attempting to insert myself in a heated argument between a couple that frequently fights like this, and what would I do if the person that I am attempting to “rescue” attacks me while I am dealing with the perceived aggressor, or lies to law enforcement upon their arrival and tells them that I assaulted her partner and that she was defending him against me? It is important to know that sometimes it is the female who was the initial aggressor instead.

Another scenario that might take place is seeing several persons beating and kicking another person. It is hard for me to imagine the emotions that I might experience if I saw an obviously stronger and more savage individual assaulting an elderly person or abducting an female or child. What should I do if an armed individual walks into a public space that I am sharing with others and starts shooting persons indiscriminately?

Claude Werner teaches an excellent class called “Strategies for Personal Protection” in which he makes the suggestion that concealed carriers should review the following strategies and determine which apply to them:

In his opinion, concealed carriers should avoid strategies five through eight unless they are willing to take a chance on perhaps ruining their lives. Strategy five actually means that if a concealed carrier is not willing to shoot someone with a handgun to protect their own life then possession of that very handgun is something that someday may negatively impact their life. The price for using a deadly weapon in order to bluff a hardened violent criminal in a self-defense scenario might very well include loss of life. The price for playing hero or police officer could include in addition to loss of life the suffering of a grievous injury, criminal charges, and civil lawsuits. There are always going to be an untold number of unknowns in play anytime that a concealed carrier comes to the rescue of other persons that he or she does not know.  It reminds me of what legendary football coach Woody Hayes allegedly said about the forward pass: “Three things can happen when you throw the ball, and two of them are bad.”

Does that mean that concealed carriers should never intervene if they witness an ongoing assault or an adult apparently abducting a child? Perhaps other options are available. These might include keeping an eye on the persons involved, calling 911, yelling at the persons believed to perpetrating the act, and under some circumstances even defensively displaying a concealed handgun without pointing it at apparent criminal actors and issuing commands to them to immediately stop what they are doing. Only the last action may have negative legal consequences for the concealed carrier, but at worst it is most likely a misdemeanor.  A properly trained concealed carrier with pepper spray on their person has an additional option, subject to being charged with a possible misdemeanor if they have misread the situation or caused it to worsen.

Having said all that, there may very well come the time that what is taking place before the eyes of a concealed carrier is so shocking to the conscience that a normal moral man or woman with every intent of avoiding an encounter with our legal system and never being sued  has a choice of taking action or never being able to live with what they failed to do for the remainder of their life. They may get seriously injured or killed, if they miss a shot it may hit a bystander, and if they misread the situation in any way they might end up in prison or broke. Their dependents will likewise be affected.

Persons that choose to act if that time comes should know that by doing so that they have actually made the decision in advance to take on an enormous risk with full knowledge that they are not going to be able to control all that may take place. That does not mean that there may not be a happy ending, it just means that real life is not a movie where the good guy always wins.