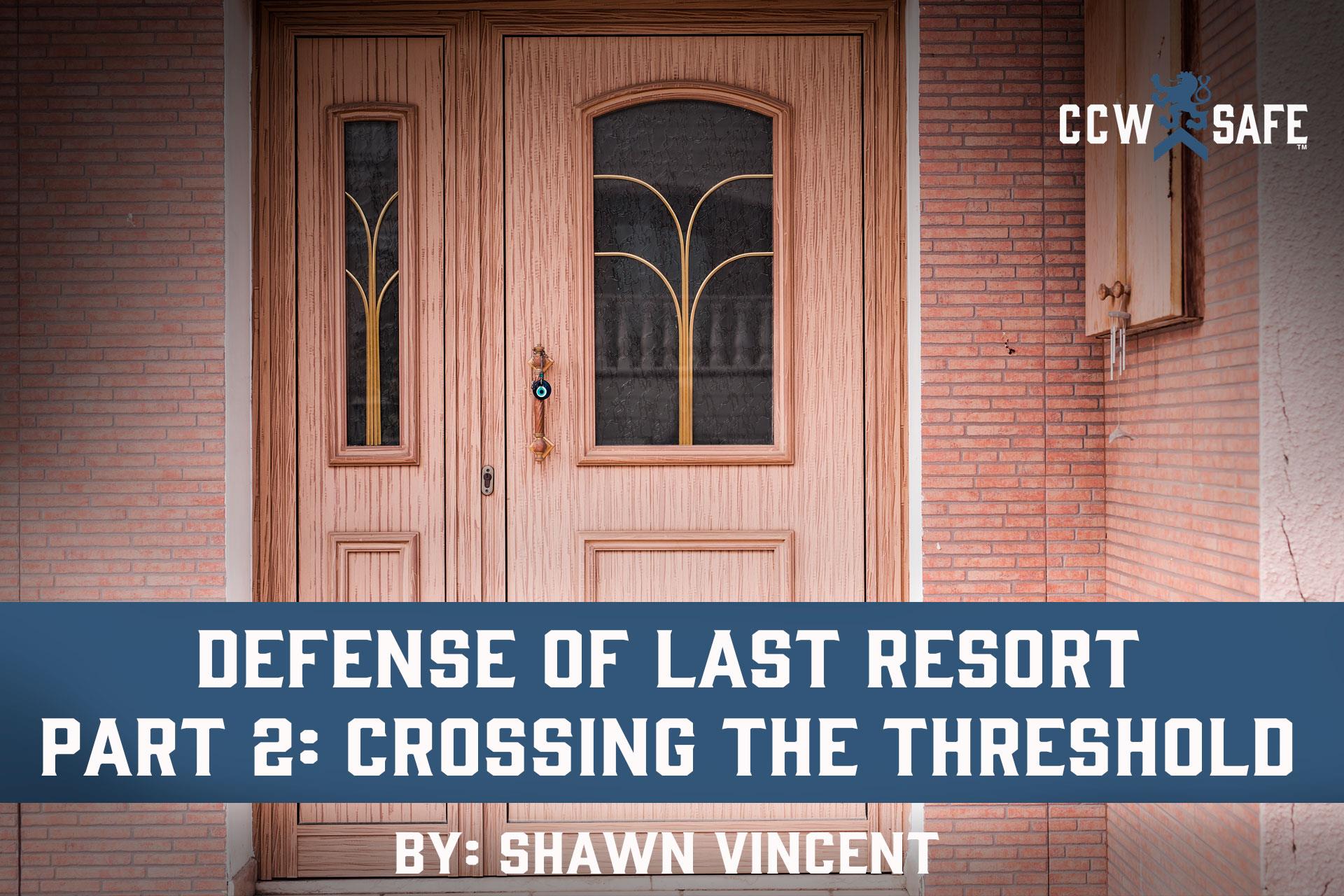 Posted on April 17, 2020 by Shawn Vincent in In Self Defense

Charles and Barbara Dorsey heard a knock at their door at 1:04 a.m. on July 21, 2019. Mr. Dorsey peaked through a front window and saw a shirtless stranger on his front steps repeatedly pressing the Ring doorbell. “Who is it?” Mr. Dorsey asks. “Gary,” the man replies, as if Mr. Dorsey should have known that.

“Gary” was Gerado Espinoza, an overnight guest of the Dorsey’s new nextdoor neighbors, the Sweeney’s. After a day of drinking by the pool, Espinoza, whose blood alcohol level was nearly three times the legal driving limit, became disoriented and mistook the Dorsey home for the Sweeney’s.

Howard County State’s Attorney Rich Gibson said, “He’s ringing the doorbell, asking to be let in. At first, it’s calm and it’s jovial on the part of Mr. Espinoza, but it rapidly escalates. It is my belief that Mr. Espinoza thought his friends were pranking him.”

But it was not a prank, and inside, over the course of about 13 minutes, the Dorsey’s terror compounded as Espinoza became agitated, shouting obscenities and making threats. While Mrs. Dorsey was on the phone with 911, Mr. Dorsey pleaded with Espinoza to leave the property. The tense situation came to a head when Espinoza aggressively manipulated the door handle, broke the lock, and breached the doorway. Mr. Dorsey fired a single fatal shot at the intruder.

Police conducted a thorough investigation, and after five weeks, State’s Attorney Gibson announced he would not be charging Mr. Dorsey. “There’s no duty to retreat in one’s home,” Gibson said. “It’s clear there was no crime that occurred, although there was a terrible loss of life.”

We know from studying other cases, however, that if just a few details were different, law enforcement could have come to a very different conclusion.

Whenever we explore home defense cases, we nearly always reference the tragic Ted Wafer case. Wafer lived alone in Dearborn Heights, Michigan. Around 4 a.m. on a cold November night, Wafer was startled awake by violent pounding on his front door. Unable to find his cell phone to dial 911, Wafer grabbed his Mossberg tactical shotgun and went to investigate. During a pause in the pounding, Wafer opened the front door to look outside. To his surprise, he found a shadowy figure standing on his porch, just inches away from his door. He discharged a round, shooting the figure in the head at point blank range.

The shadowy figure was Renisha McBride, a 19-year-old former cheerleader who was drunk, high, injured, and likely looking for help. After a weeks long investigation, prosecutors charged Wafer with second degree murder. A jury convicted, and Wafer is currently serving a 17-year prison sentence.

Both Ted Wafer and Charles Dorsey encountered agitated, intoxicated strangers at their front doors late at night. Both fired a single, fatal shot, but they had two significantly different legal outcomes. Here’s why:

First, the Dorsey’s called 911; Wafer did not. Wafer couldn’t find his phone because it was in the pocket of his pants which he had hung on the bathroom door before falling asleep in his recliner. We have all misplaced our phones, but a lesson for gun owners concerned with home defense is that your phone is just as important as your firearm. When it comes to your legal liability in a self-defense shooting, you are much better off if you can safely dial 911at the first sign of trouble — before pulling the trigger.

The more significant difference between the Wafer and Dorsey cases involves who opened the door. Mr. Dorsey held his fire until Espinoza forced entry into his home. Wafer, on the other hand, left a position of relative safety and opened the door himself, making the resulting confrontation all but inevitable.

When announcing that he wouldn’t be filing charges, the prosecutor in the Dorsey case noted “there’s no duty to retreat in one’s home.”  Don West, National Trial Counsel for CCW Safe and veteran criminal defense attorney, explains the the front porch of a home is considered “curtilage,” defined as the area immediately surrounding or attached to your home, and that the protections offered by the Castle Doctrine should be the same whether someone is standing on his front porch or standing in his living room. But in Ted Wafer’s case, he wasn’t standing on his porch, rather, he made the decision to leave his living room and go to the porch where the danger was. It’s the opposite of retreating; it’s advancing. As criminal defense lawyer and CCW Safe contributor Andrew Branca says, “going to the fight never looks like self-defense.”

Don West notes that in most jurisdictions “if someone enters your home by force, it’s assumed or presumed that they present an imminent threat of great bodily harm or death.” Ted Wafer’s porch was not enclosed however, so even though the porch was legally “curtilage,” McBride had not entered by force, and the presumption of an imminent threat had not been triggered.

Moreover, Don West says that most states have laws permitting the use of deadly force to prevent a forcible felony. Breaking into a home certainly qualifies, and Wafer’s attorneys tried to convince a jury there was evidence that McBride tried to force her way through the locked screen door that hung before Wafer’s front door. The evidence proved inconclusive, however, and the jury ultimately didn’t find it significant.

In the Dorsey case, Espinoza made no real effort to force his way into the home until the final seconds, and Mr. Dorsey held his fire until Espinoza had actually broken the door open. While a legal argument could be made that Dorsey was briefly justified in using deadly force in the moments before the door opened — in an attempt to “prevent a forcible felony” — such an action would be fraught with legal peril. We just recently explored the case of Gregory Farr who shot a man who was at his front door at 3:30 a.m. manipulating the door knob and striking the door with his shoulder. Like in Dorsey’s case, the presumed intruder was drunk and had mistakenly come to the wrong door, but unlike Dorsey, Farr’s decision to fire before the door was actually breached led prosecutors to charge the defender with manslaughter.

Charles Dorsey made a decision that he would not use his firearm unless or until Espinoza got through the front door. He had established a threshold, and he waited for the perceived intruder to cross that threshold before deploying deadly force. It very likely saved him from prosecution and potential conviction. The lesson for concealed carriers and gun owners concerned with home defense is that you should survey your property and establish in your mind where your defensive thresholds are — your front door is certainly one of them, but what about a sliding glass door? Your garage? Your screened-in porch? You have to decide which thresholds, if crossed by an intruder, make you or your family vulnerable. Should you ever encounter a suspicious stranger on your property, if it is safe to do so, call 911 and wait for the intruder to cross your defensive thresholds before resorting to your firearm, and think twice about firing through that threshold or crossing it yourself.