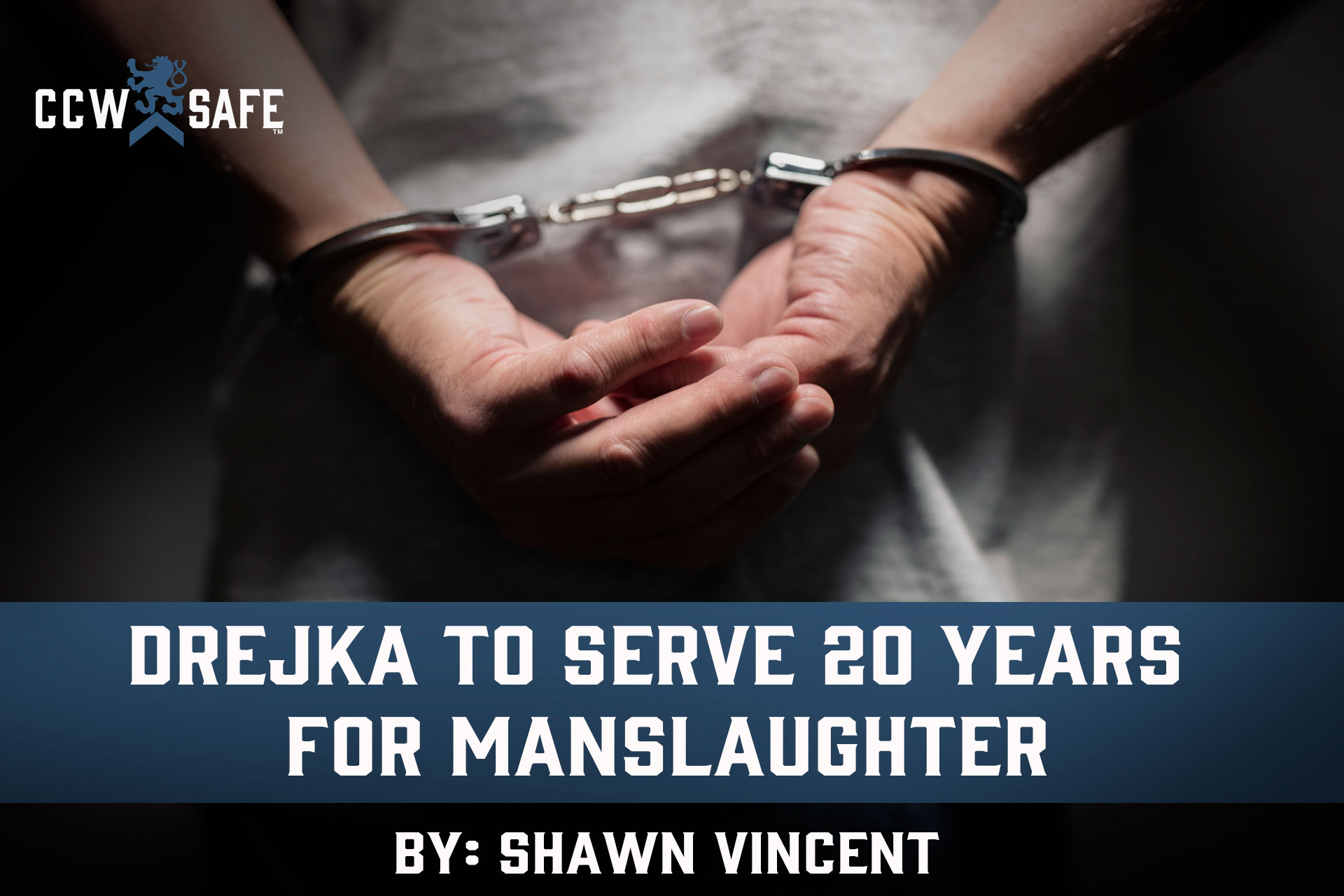 Posted on October 11, 2019 by Shawn Vincent in In Self Defense

Drejka to Serve 20 Years for Manslaughter

Drejka to Serve 20 Years for Manslaughter

Judge and jury give insight into their decisions

Michael Drejka has been sentenced to 20 years in prison for the shooting of Markis McGlockton. Last month, a jury found him guilty of manslaughter.

If you’ve been following our articles, you know that Drejka shot McGlockton after an argument over a handicapped parking spot. While Drejka chided Brittany Jacobs over parking in the spot, McGlockton came to her defense and violently shoved Drejka to the ground. Surveillance video shows Drejka draw his pistol and aim. McGlockton takes a slow step backwards — retreating, prosecutors argued. Drejka fires one fatal shot.

As a litigation consultant, I volunteered pro bono to help qualify the jury in this case; I felt the negative press could hinder his ability to get a fair trial. The lawyers agreed that I could continue to write about the case here, and I’ve provided analysis for CCW Safe members.

Firstly, jurors took 6 and a half hours to render their verdict, and jurors reported that after the first hour of deliberations, the panel was split. Only after watching the 11-second surveillance video “at least two or three hundred times” was the jury able to unanimously settle on a guilty verdict. They gave it serious consideration.

Juror James Ryan said, “I had a hard time seeing what he said he saw,” referencing Drejka’s claim that he thought McGlockton was advancing despite the video showing him stepping backwards.

Juror Timothy Kleinmann said, “He (Drejka) had time to think, ‘Do I really have to kill this man?’ And no, he didn’t, but he chose to.”

Alternate juror Edie Clator said, “The defendant had enough time to make the decision that once he saw the victim retreating, that he did not have to pull the trigger.”

Another alternate, Keith Booe expressed that sentiment sussicently: “I think he had the opportunity not to kill him.”

Resoundingly, the jury felt that once McGlockton stepped backward, the imminent threat to Drejka had ended, and during the pause Drejka took between drawing his pistol and squeezing the trigger, he should have been able to recognize that.

Judge Joseph Bulone shared his thinking when he handed down the 20-year sentence. He called Drejka a “wannabe cop,” criticizing the defendant for initiating the confrontation with Jacobs and calling out the irony that Drejka was also illegally parked.   The judge commented that Drejka appeared to show remorse during trial, and he lectured concealed carriers on the responsibility that come with the right to carry.

Clearly, the judge felt Drejka acted irresponsibility by sparking the confrontation, and he reinforced that the use of deadly force was not justified in this case.

Lots of people have different opinions about self-defense and the right to carry concealed.  The lesson for concealed carriers is that, if you ever face prosecution in the wake of a self-defense shooting, the only opinions that matter to you are those of the jurors and the judge. The candor of the judge and jury in the Drejka case provides an excellent window into their minds.  Their message echoes what I’ve often written here: Don’t start conflicts when you are carrying, and if there’s anyway to safely avoid using deadly force, you absolutely always should.