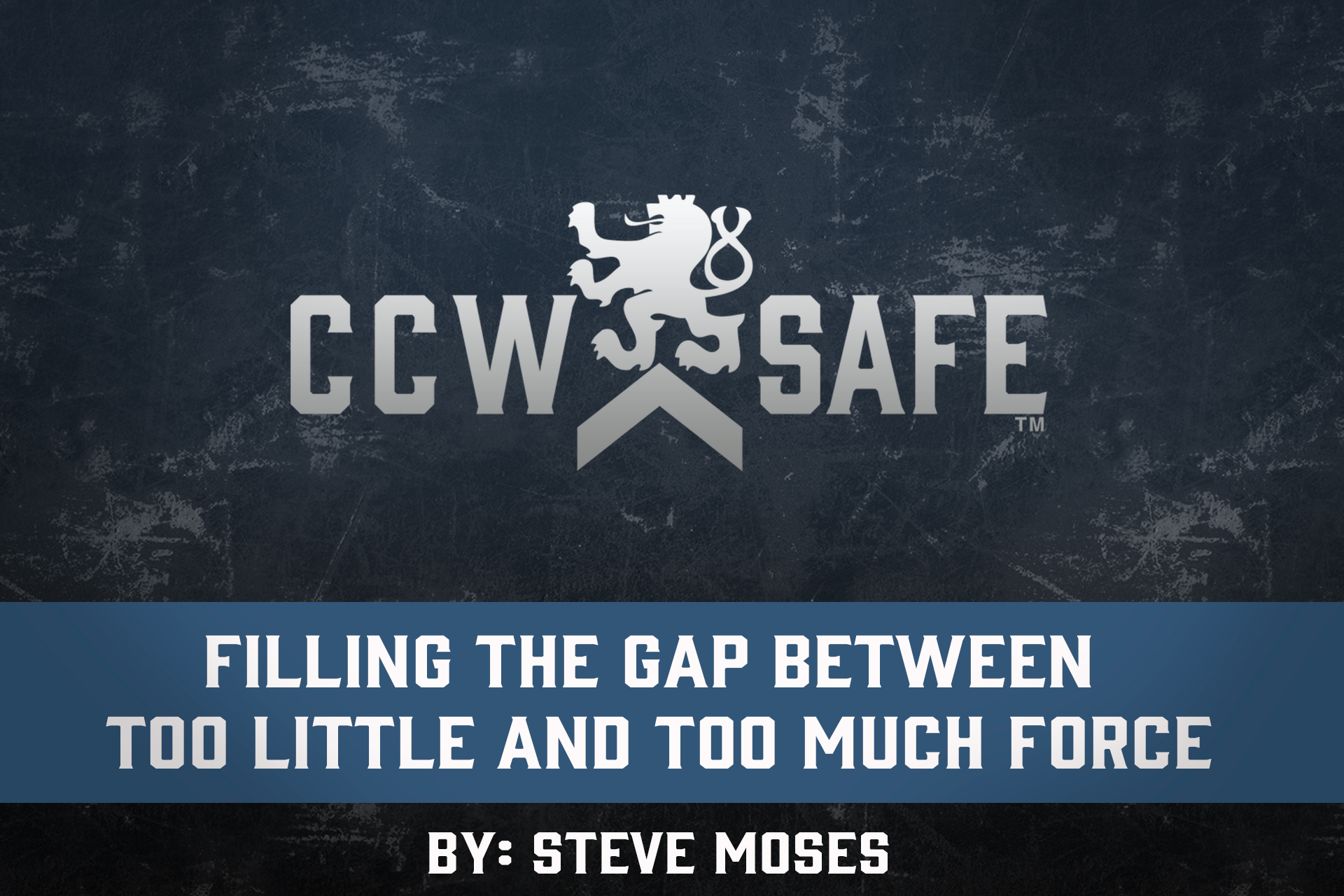 Posted on February 24, 2020 by Steven Moses in Training

FILLING THE GAP BETWEEN TOO LITTLE AND TOO MUCH FORCE

FILLING THE GAP BETWEEN TOO LITTLE AND TOO MUCH FORCE

“If all you have is a hammer, everything looks like a nail.” Multiple individuals have been incarcerated as a result of using or threatening to use a handgun when other options were available. Concealed carriers should know their state’s laws regarding the use of deadly force. There are at least three basic elements in play:

Pepper Spray (also known as oleoresin capsicum, or “OC”) contains an active ingredient called capsaicin that irritates the eyes, causing temporary blindness and a burning sensation. I can best describe the sensation as my eyes burn intensely and while I can literally force my eyes to open after being sprayed it is seemingly impossible to leave them open for more than a second or two before I close them involuntarily. This would suggest that concealed carriers should carry OC in addition to a concealed handgun (and in locations where lawful carrying of handgun is not permitted).

I can think of multiple valid reasons (I am sure there are more) in which the ability to respond to a low-level force incident with OC makes sense, which includes the following:

The man in the know when it comes to teaching civilians how to use OC properly is Chuck Haggard of Agile/Training & Consulting. Much of the information set out above was derived from a phone conversation that I had with him regarding why and how concealed carriers might benefit from learning how to use OC to help bridge the gap between too little force and too much force.

Chuck Haggard has a long history of conducting defensive training for law enforcement officers, military personnel, private security officers, and private citizens. He retired after 30 years of law enforcement experience, including over 28 years on the Topeka Police Department which included posts as Watch Commander, Response Team squad leader and team leader, Rangemaster/Armorer, and Field Training Supervisor. Chuck is a graduate of multiple training and instructor classes and certified to teach pistol, rifle, carbine, OC, baton, Taser, and Defensive Tactics classes. Chuck owns and operates Agile/Training & Consulting and routinely offers mobile training courses on, among other subjects, OC Spray/Less-Lethal Weapons for Non-LE Instructors. Chuck said that he was introduced to OC in 1989 and that he personally sprayed hundreds of people (mostly students in classes) and he himself had been sprayed with OC over 60 times. While there is always a chance that a person sprayed with OC might have an adverse reaction, for the most part a person in reasonably good health should not sustain a debilitating injury.

To be perfectly honest, up until the time that I chose this topic to write about I had not been carrying OC as a concealed carrier. My reason was relatively simple. I had a bad experience carrying OC once where I somehow managed to discharge a keychain model in my front pocket while seated during a business lunch at an upscale restaurant in Plano, Texas. It was not pleasant. Regardless, I have seen incident after incident in which a concealed carrier used a handgun inappropriately in situations where OC would almost certainly worked out better for all players concerned. After listening to Chuck conduct an excellent lecture titled “Between a Harsh Word and a Gun” discussing the advantages of OC at a past Tactical Conference, I re-thought the subject and contacted Chuck to do a phone interview. Questions that I asked included how should concealed carriers select OC, when and how should they use OC for defensive purposes, and how should concealed carriers train in its use so as to obtain maximum effect.

How to pick OC:

OC is delivered via conical spray, stream spray, foam, or gel. Concealed carriers interested in detail will be able to find plenty of information on each using the internet. Having gone through the police academy myself and seen over 20 fellow students get sprayed by all four types, I am an advocate of the conical spray or stream. Both seemed to have an impact on the recipient significantly faster than the foam or gel. I was foamed myself and by no means was I quickly disabled, although a few seconds later I certainly felt it. About 30 minutes later I inadvertently walked through the remnants of conical spray administered to my partner, and while walking (actually more like stumbling) with him to the decontamination area I felt like that I had hot bacon grease in my eyes.

Advantages to OC gel and foam are the ability to avoid inadvertently spraying others than the intended target, it is more difficult for the recipient to wipe away than spray or stream, and less affected by wind. One of the things that made me reconsider carrying OC was the advent of the smaller OC cannisters equipped with a flip-top safety that covers the discharge button on top, as opposed to only a lever that can be inadvertently knocked from the safe position to the firing position (which was the cause of my spraying myself in the groin). Chuck recommends that concealed carriers only carry OC that clearly shows its expiration date and that they replace the same upon reaching that date. The greater the capsaicinoids content, the hotter the spray. I recently purchased the Mace PepperGard Pocket Pepper Spray with a reported 1.4% capsaicinoids concentration. Chuck said positive things about the Sabre Red and POM pepper sprays also.

When to use OC:

An entire article could be devoted to addressing this subject, which is well past the scope of this article. Regardless of the scenario, attempting to frantically access OC stowed in a pocket or a purse while being rushed or only an arms-length from an aggressive individual is ill-advised. Concealed carriers should get their hand on their OC as soon as they perceive a possible threat with the intention of using the same if warranted. This does not necessarily mean that the OC should be brandished for all to see, but there may be situations in which using the threat of OC is both advised and justified. The ability to manage unknown contacts through both the use of verbal commands and proven tactical movement is important and doing so properly may very well uncover the aggressor’s true intent.

When not to use OC:

Times that I would not want to use OC include attempting to spray a person who is attempting to grapple as well as a person displaying the ability and intent to use lethal force in the form of handgun, club, or cutting instrument. While this may seem completely obvious, there are persons in the past who have either fixated on the tool they had in hand regardless of the disparity of force or evidenced great reluctance to use deadly force against another in a true deadly force encounter.

If I found myself in a crowded room and contemplating the use of OC against another, I would hope that I make every effort first to attempt to disengage and escape. Using OC in such an environment might cause a literal human stampede with the end result being that innocent parties are trampled. Like most things, the likelihood of a positive outcome in an encounter involving the potential use of force increases if the concealed carrier is also aware of what is going on in the background.

How to get training:

There is an old saying that the best water is that which is closest to the source. My goal is to attend Chuck Haggard’s OC Spray/Less-Lethal Weapons for Non-LE Instructors in 2020. Concealed carriers should definitely consider training under Chuck unless confronted with travel and/or timing challenges. If not, there may be an instructor somewhere close who has taken the instructor class from Chuck.

Concealed carriers should go to www.agiletactical.com for more information on Chuck Haggard, the courses he offer, and his current class calendar.