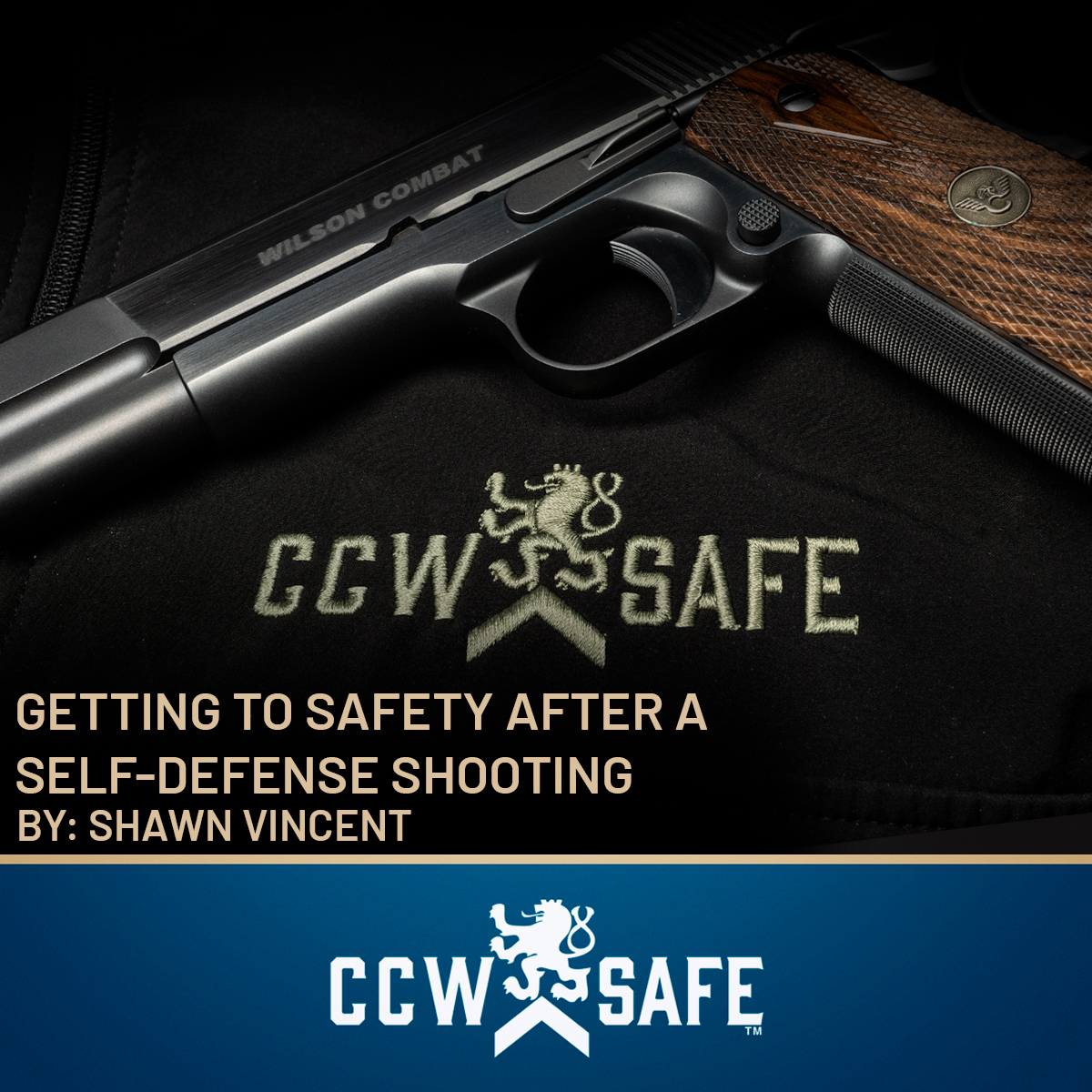 Posted on September 9, 2022 by Justin Collett in Shawn Vincent

Getting to Safety After a Self-Defense Shooting

Most concealed carriers and armed defenders have imagined the types of circumstances where they might be forced to use deadly force in self-defense. Far fewer gun owners, however, have made a serious effort to understand what to expect in the immediate aftermath of a self-defense shooting. How do you know when the threat is over? What’s the best way to handle the 9-1-1 call? What should you do while you wait for first responders to arrive? How should you interact with law enforcement officers? What should you say or not say?

In a recent podcast series, I spoke with Don West and Steve Moses about these topics. Don West is a criminal defense attorney and National Trial Counsel for CCW Safe. Steve Moses is a CCW Safe contributor and a firearms instructor. Over the coming weeks, we’ll explore each of the questions detailed above, but the foremost concern for an armed defender in the immediate aftermath of a self-defense shooting is making sure the threat is over, and that they — and those they are responsible for protecting — are safe.

Steve Moses says, “Sometimes we’re under the misperception that if we shoot somebody, the fight’s over.” He reminds us, however, that most people who are shot, particularly with handguns, survive. While an attacker struck in the central nervous system (particularly the upper spine or brain) is almost always immediately incapacitated, an attacker struck in the heart or major artery may be able to take action, at least for a few moments. Those shot in less vital areas will likely retain most of their physical abilities and could continue their attack. When shot, an attacker will either flee, fall, or continue the fight. Here are some real-life examples of defenders who responded well to each of those scenarios:

Melinda Herman was home during the day with her twin children when an intruder brazenly broke through her front door with a crowbar. Herman ultimately shot the intruder five times in the face and neck with a .38 revolver. None of the shots proved fatal, nor were they immediately incapacitating, but they were persuasive in convincing the intruder to flee. Herman took her children to safety next door where she waited for first responders to arrive.

Zach Peters also encountered brazen mid-day intruders after they smashed through a door. However, unlike Herman, Peters was armed with an AR-15-style rifle. He fired at the intruders, incapacitating all three, and then retreated to the relative safety of his room where he barricaded himself in and called 9-1-1. He could hear that at least one of the intruders was still alive and in his home, and he wisely waited for the police response.

While attending a motorcycle rally, CCW Safe member Stephen Maddox suffered three attacks at the hands of an old friend who had fostered a grudge. Twice, Maddox escaped his attacker — but during the third encounter, the attacker wrestled him to the ground. It took five shots from a .45 revolver to weaken the attacker enough for Maddox to extract himself from the fight. None of the shots proved immediately fatal, and the attacker was still alive when Stephen retreated around a corner and contacted 9-1-1.

Stephen has given CCW Safe specific permission to discuss the details of his case.

Each of these defenders was able to stop the attack with their firearm, but in each case, the attacker wasn’t immediately incapacitated. Police found Melinda Herman’s attacker alive but unconscious after he crashed his truck into a tree. The intruders Zach Peters encountered soon died of their injuries, but one struggled for serval minutes before succumbing to his wounds. None of the individual shots Stephen Maddox fired proved fatal, but altogether they caused his attacker to eventually expire from loss of blood.

Because none of these intruders were fully incapacitated immediately upon being shot, each still potentially posed a continued threat. Wisely, none of the defenders opted to continue the fight. Had Herman chased the intruder out of the house and gunned him down in the yard, authorities might not have found her case so clearly justified. Had Peters “finished off” the intruders by shooting them while they lay prone on his kitchen floor, his obvious act of self-defense would have been transformed into murder. Had Maddox shot his attacker after extracting himself from his clutches, he might have been convicted at trial rather than being granted a quick acquittal.

Instead of pursuing or executing their wounded attackers, Herman, Peters, and Maddox retreated to the nearest place of relative safety and waited for first responders.

From a legal perspective, we encourage defenders not to leave the scene of a self-defense shooting. Attorney Don West says, “The reason you don’t want to leave the scene is that, if you’re charged with a crime, the prosecutor may ask the jury to infer some consciousness of guilt because you fled.” Fleeing the scene can make a shooter look guilty. Don stresses, however, that the legal considerations are obviously secondary to the immediate safety concerns, and a defender who can articulate the nature of the threat and how they sought safety can mitigate any “consciousness of guilt” implications. Steve Moses notes that a defender facing multiple attackers may have to flee farther from the scene to find safety, and that is perfectly acceptable, provided the defender immediately initiates a 9-1-1 call.

The lesson for concealed carriers and armed home defenders is that once you’ve been able to stop an attack, especially if the attacker is not completely incapacitated, it is imperative to get yourself and your loved ones to the nearest place of relative safety and call 9-1-1. Next week, we’ll share some insights on how to manage the 9-1-1 call.