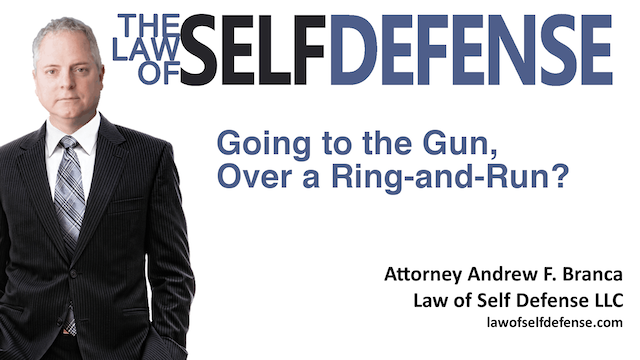 Posted on October 19, 2019 by Andrew Branca in Uncategorized

Go to the Gun, Over a Ring-and-Run?

Go to the Gun, Over a Ring-and-Run?

Today’s post is prompted by a news story out of the Nashville area in which an off-duty member of Nashville EMT, who also happens to be an ex-NFL player, decided to go to his gun in response to some malcontents doing ring-and-runs at his home, and other residences in the neighborhood.

If you’re guessing that didn’t work out well for him, you’d be right.

A recent Thursday, October 3, at around 9:30 pm, a group of “yutes” (at least one of whom was a legal adult) decided it would be fun to knock loudly on neighborhood doors and then run before the knock could be answered.

Technically, this kind of prank can be prosecuted as a trespass. Sure, generally speaking the residents of a home give license to people to come up to their front door and knock, and doing so for legitimate purposes would be considered entering into the home’s curtilage with at least an implied license.

That license does not, however, extend to entering on the property for the purpose of pranking the homeowner, and therefore knocking for “ring-and-run” purposes is not under implied license. Absent that license, entering the home’s curtilage arguably qualifies as at least a simple trespass—and arguably a criminal trespass, if it can be credibly claimed that the trespasser also intended some additional unlawful act, in addition to the trespass (e.g., disturbing the peace).

Indeed, one of the persons involved in this “ring-and-run” prank has been charged with criminal trespass for their conduct. That said, under Tennessee law criminal trespass is a Class C misdemeanor punishable merely by up to 30 days in jail and a $50 fine, so rather small potatoes in the grand scheme of things.

In this particular case, it is the response to the criminal trespass that’s created the legal heat, in the form of multiple felony charges against the homeowner—a Nashville EMT and former NFL player—who took serious affront to the “ring-and-run” pranksters.

I often note that most of the cases I work on involve normally law-abiding people who have never before been in any serious trouble with the law, but who suddenly find themselves facing the prospects of a felony conviction and a long prison sentence because they threatened someone with a gun, most often in what they think was self-defense or some other lawful purpose.

It’s also generally the case that this threatening with a gun was the end-result of a long chain of poor decision-making by everyone involved, both the person who threatened with the gun and the technical “victim” who set off the person waving the gun around.

In this particular case, one of the homeowners subject to the “ring-and-run” prank was 43-year-old Jimmy Robinson Jr. One cannot help but wonder if Mr. Robinson had already been having a pretty bad day when he was stung by the prank, but in any case his reaction to the “ring-and-run” was pretty completely over the top.

Rather than simply shaking his head at having been pranked, or perhaps going so far as to call the police to report the conduct, Mr. Robinson chose to engage in what legal academics would refer to as “self-help.”

“Self-help” doesn’t sound like all that bad a thing—after all, God helps those who help themselves, right?—except that in this instance “self-help” took the form of Mr. Robinson arming himself with a handgun, getting in his car, and searching around the neighborhood for the pranksters. Further, once he found the pranksters in their own vehicle, Robinson exited his car, pulled out his gun, and ordered two of the five teens out of the car.

That’s the scene that local police came upon when they, too, joined the party.

The immediate legal result was that Mr. Robinson was arrested and charged with two counts of aggravated assault with the use of a weapon.

Tennessee has a wide variety of definitions of aggravated assault, but the one that applies to the facts of this case can be found here:

(a)(1) A person commits aggravated assault who:

(iii) Involved the use or display of a deadly weapon; or

This particular form of aggravated assault is a Class C felony under Tennessee law, and as such is good for up to 15 years in prison. That’s quite a bit longer than the 30 days potentially facing the “ring-and-run” trespasser.

Now, I don’t expect that Mr. Robinson ever had any intention of actually shooting these pranksters, or causing them any physical harm whatever. He was probably just pissed, perhaps about something else entirely that laid a foundation for this emotional explosion, and wanted to “teach these darned kids a lesson.”

Unfortunately, many people don’t understand that merely putting another person in fear of serious bodily injury, and especially when doing so with a deadly weapon, can easily constitute a serious felony punishable by 10 or more years in prison. It doesn’t really matter what one’s actual intent is, it only matters what the victim’s reasonable perception of your conduct is.

If your conduct is such that a person would reasonably fear imminent bodily injury by your use of a deadly weapon, you’ve committed aggravated assault under Tennessee law, period, and are looking at 15 years. The general legal definition of the crime, and the sanction, are pretty much the same across the country, for our purposes.

Guns are intended to save your life, folks, or the lives of other innocents. They’re not tools to frighten people, no matter how much of a jerk they are being. You need to find a non-gun solution to those non-deadly irritants.

Before I go, to show our appreciation to the CCW Safe community, Law of Self Defense is making available our Law of Self Defense State-specific DVD and Online-streamed courses at half the usual price, that’s 50% off. We have a specific individualized course for each of the 50 states, and each course provides an in-depth explanation of the self-defense, defense of others, and defense of property law of the specific state covered.  We’re only running this offer for a week, however, so if you’re interested, don’t dawdle, click here NOW!