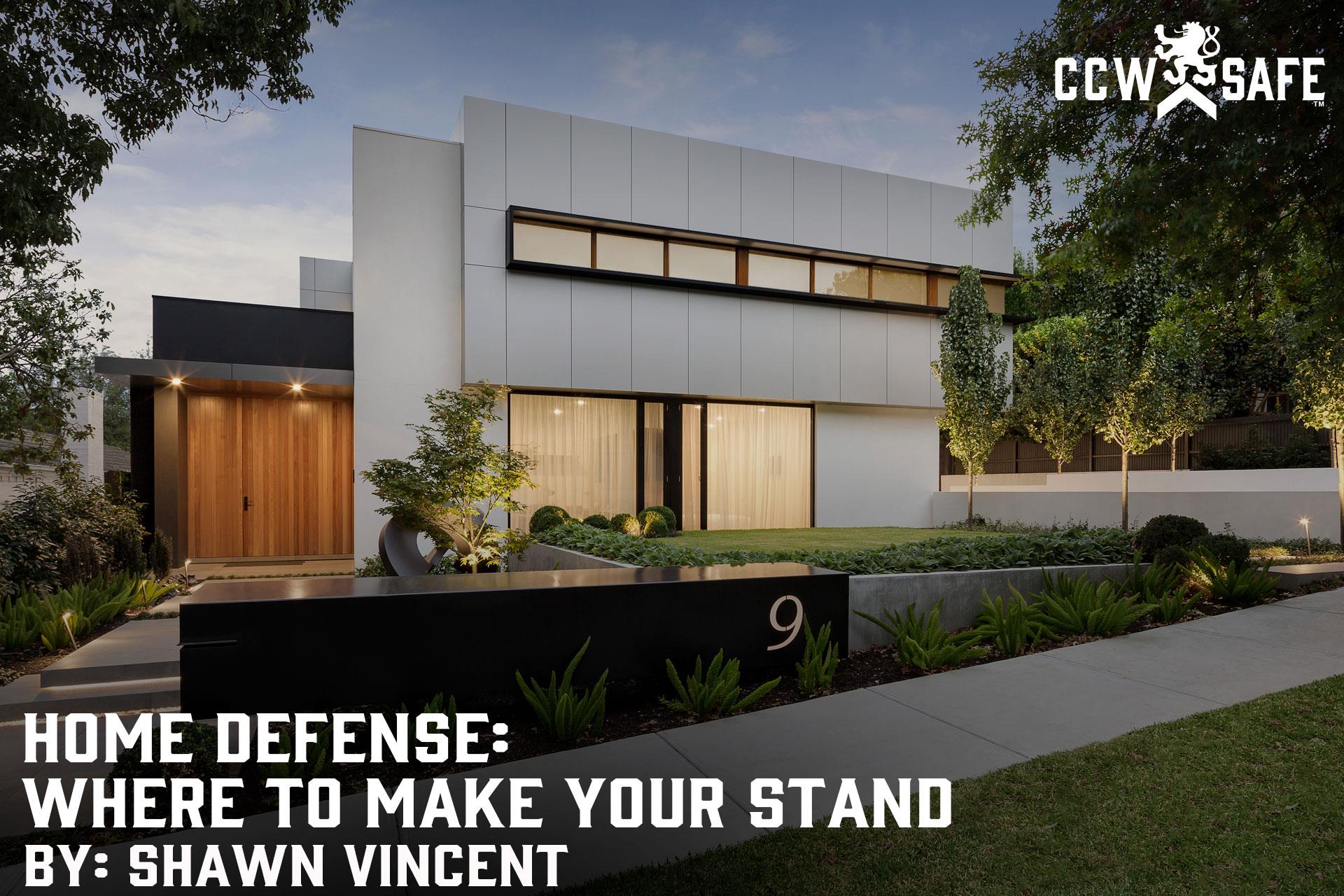 Posted on October 1, 2021 by Shawn Vincent in In Self Defense

Home Defense: Where to Make Your Stand

Home Defense: Where to Make Your Stand

The Tactical and Legal Benefits of the Hard Corner

One of the most common self-defense scenarios a home defender is likely to encounter is dealing with a stranger pounding on the front door or interloping on their property late at night. For many defenders, their first instinct is to arm themselves and either go outside to confront the threat or to stand behind the front door, gun drawn, waiting to engage the intruder should they break into the home. Both options have legal and tactical disadvantages. Firearms instructor Steve Moses, based on his experience on a tactical team that served high-risk warrants, offers armed defenders a great alternative defensive position, but before we get to that, let’s explore why engaging a potential intruder at your front door is problematic.

We’ve explored a number of cases where the armed defender opened his front door to confront a perceived intruder. Marcus Kaarma charged out of his front door, armed with a shotgun, to confront a potential intruder he had detected in his dark, opened garage. He fired four shots into the darkness. One of those shots struck and killed a foreign exchange student who was most likely indulging in the great American teenaged pass-time of “garage hopping” or pilfering beers from unsecured garage refrigerators. Ted Wafer, also armed with a shotgun, opened his front door to investigate the wild pounding he had heard moments before. Startled by the shadowy figure he encountered on his porch, he fired a round, killing a nineteen-year-old girl who was intoxicated, hurt, and probably desperately seeking help. Both men were charged, tried, and convicted.

By opening the door to a potential intruder, both defenders put themselves at a tactical and legal disadvantage. The home is a highly defensible place where the defender has the legal benefit of the Castle Doctrine and the tactical advantage of concealment. When an armed defender opens the door or rushes outside, they abandon the tactical and legal protections of the home, and they engage the intruder on equal footing.

If an intruder was to break into a home, the homeowner, in nearly every jurisdiction, can assume the intruder represents a severe enough threat to justify deadly force, but that assumption doesn’t hold for homeowners who encounter interlopers elsewhere on their property — even when there is a stranger pounding on the door. CCW Safe Critical Response Coordinator Gary Eastridge says, “If somebody is on your front porch and banging hard on your door, if they’re not making an attempt to get in, they’ve committed nothing more than trespass — and in most states, for someone to commit the trespass, you have to ask them to leave first. If that person has made no realistic attempt to gain entry, they’ve committed no crime, so the use of lethal force at that time would not be justified. ”

Don West, criminal defense attorney and National Trial Counsel for CCW Safe says, “If someone’s banging on the door and you don’t like it, even if you may be somewhat fearful that they intend to do more than that, it doesn’t give you the justification for shooting through a door or doing something violent in response.”

Speaking of shooting through the door, we’ve explored the case of Greggory Farr, an army veteran living in Ewa Beach, Hawaii, who like Ted Wafer, was awoken by banging on his front door late at night. Unlike Wafer, Farr didn’t bother to open the door to confront the potential threat; he fired a rifle round straight through the door, killing a drunken Navy sailor who thought he had been locked out of his own house. Farr was charged with manslaughter, and according to the last news reports we could find, he is awaiting trial.

Thanks, in part, to the wisdom of his wife, Charles Dorsey didn’t make the same mistakes made by Kaarma, Wafer, and Farr. Dorsey issued verbal warnings to the late-night interloper he found pounding on his front door. As the perceived intruder rang and knocked and yelled, Dorsey, armed with a pistol, patiently waited. When the stranger at the door struggled with the handle long enough that the lock failed, Dorsey shot the intruder as he came through the front door. It turned out the man was a confused, inebriated houseguest of the next-door neighbor. While the local prosecutor declined to file charges, Dorsey must now live with the fact that he killed an otherwise law-abiding citizen over a tragic mistake.

Steve Moses says that Dorsey, by waiting at the front door, put himself at a tactical disadvantage because at the moment the door flung open, they were both on equal footing. The intruder and the defender saw each other at the same time. When Steve served on a tactical team tasked with delivering high-risk warrants, he says he wasn’t nearly as worried about encountering a threat in the middle of a room as he was about a person hiding in a corner on the same wall as the door: the hard corner. “As an armed home defender,” Steve says, “if you take a hard corner in a room deep in your house, in order for someone to actually get eyes on you, they’re going to have to penetrate that room, and when that happens, you have the tactical advantage of seeing them before they see you.”

The other advantage of taking a hard corner is that it gives the armed home defender more time to more accurately assess the true threat posed by the intruder. Three of these cases involved highly intoxicated people who had mistakenly stumbled upon the wrong house. One of these cases was an unarmed teenager stealing beer. None of these cases involved an actual deadly threat. A strong verbal command would likely have sent the teenager running from Kaarma’s garage. Wafer and Farr could have called the police and waited patiently; it’s likely the inebriated interlopers would never have broken through their doors. If Dorsey had been in a hard corner instead of standing just behind his front door, the drunken houseguest would have likely discovered his mistake once he stumbled into the wrong living room, and it’s unlikely he would have wandered far enough into the Dorsey home to pose an immediate threat.

Don West says, “There is a zone of ambiguity — not knowing for sure what’s actually happening, being fearful and apprehensive, jumping to conclusions based upon limited information. A lot of that stuff is happening when somebody’s pounding on the door and you don’t know if they’re trying to pound hard enough to break through and attack you, or whether they’re lost or drunk or suffering from mental illness of some sort.”

The lesson for the armed home-defender is: if you take a hard corner, as Steve suggests, you can eliminate much of the ambiguity that Don speaks of. An intruder who breaks into your home and deliberately comes to the room where you’ve taken a hard corner is much more likely to be a real threat than someone who is simply banging on your front door. Being in a hard corner helps curb the urge to rush out and meet the perceived aggressor, it removes the temptation to shoot through the door, and should an intruder come upon your position, you’ll have the benefit of being able to see them and assess them before they see you.