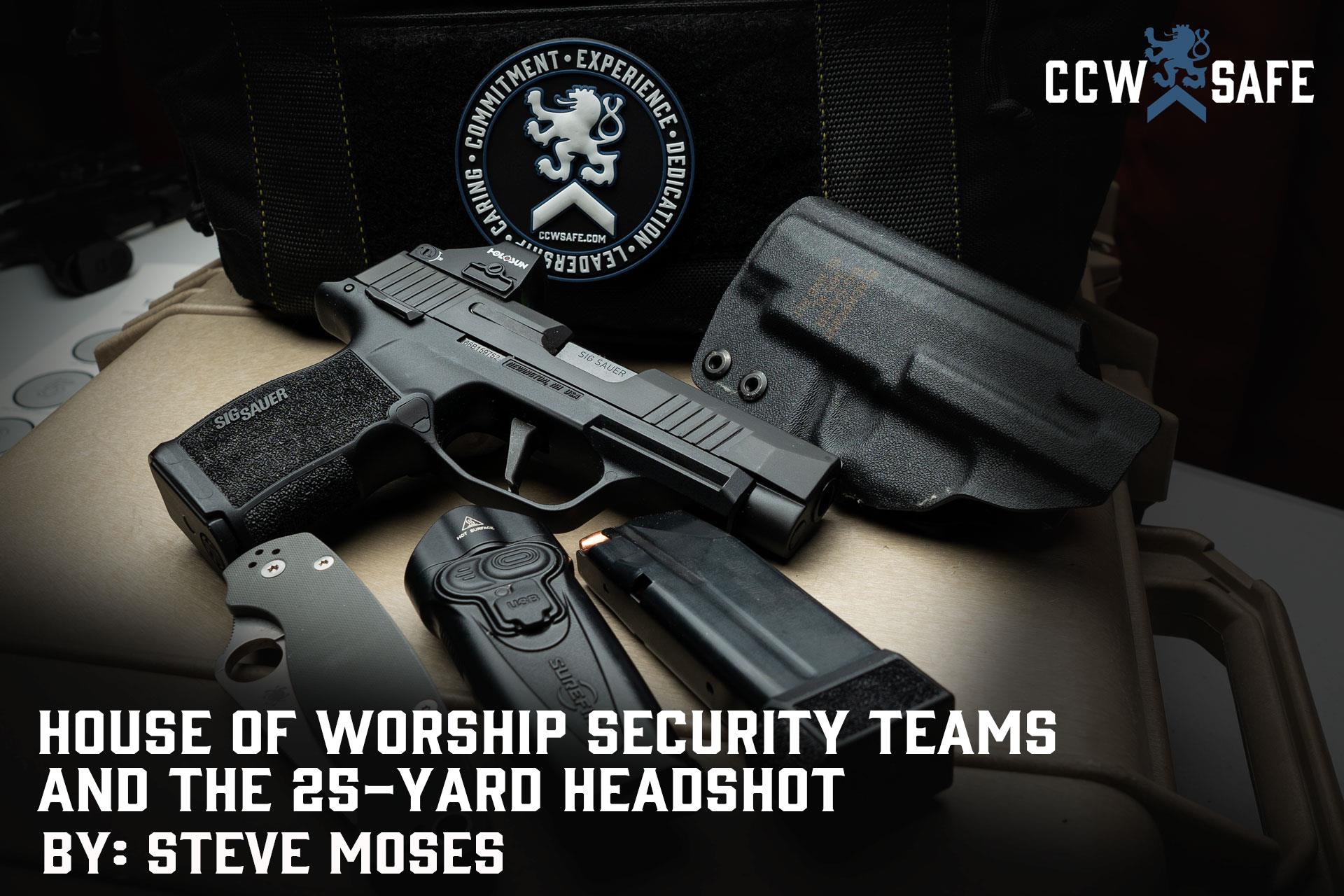 Posted on March 1, 2021 by Steven Moses in Training

HOUSE OF WORSHIP SECURITY TEAMS AND THE 25-YARD HEADSHOT

HOUSE OF WORSHIP SECURITY TEAMS AND THE 25-YARD HEADSHOT

In the aftermath of the active shooter incident in a White Settlement, Texas church there has been much banter about the importance of being able to make a quick headshot at a distance of 25 yards. I am not exactly sure as to why this exact yardage has been selected. The active shooter was engaged and stopped at a significantly shorter distance.

I am an advocate of always becoming a better shooter. I like the idea of being able to consistently make quick 25-yard head shots and 50-yard body shots, and I have yet to run into that person who dealt successfully with a high-stakes situation of any kind that later said that the time they spent on preparation and training was wasted. However, given a choice between having a member on my House of Worship security team who has great marksmanship skills but little tactical knowledge or one with less marksmanship skill but great tactical knowledge, I prefer the latter. The reason is simple. The second member understands the importance of correctly perceiving what he or she is seeing, has an understanding of the terrain in which the action is taking place, and possesses the ability to choose and move to a better position if necessary in order to take a safer shot and lessen the possibility of other persons in close proximity of being struck by errant rounds.

Shooting a static target is not the same as shooting a target that is in motion.  A factor that should be taken into consideration is that the target may move from side to side, up and down, and whenever and wherever at any time of its own choosing. Misses that impact a solid backstop mitigate damage to some extent other than wasting time and perhaps causing the active shooter to then return fire in the team member’s direction, not only endangering that person but those around him or her. However, there are relatively few solid interior walls in most Houses of Worship, and handgun rounds will typically penetrate sheetrock walls. Many Houses of Worship have a greeting area and hallways just outside of the sanctuary, and it is not uncommon for others to be present in them during the service.

Another problem for members of the House of Worship security team is the high probability that panicked parishioners may literally pop up from the pews and start moving at any time, perhaps at the same time a member of the team has achieved a good sight picture and is completing the press of the trigger. The very nature of making a long-distance shot with an iron-sighted pistol calls for a hard focus on the front sight of the handgun.  Doing so makes it more difficult to see and respond to what may be happening between the front sight and the shooter.  Advocates of red dot sights on pistols may correctly assert that their vision is less hampered in this event since the focus is placed on the target instead. Regardless, a seated person may suddenly stand up or run right through the field of fire in moment of blind panic.

In light of what I have written above, my opinion must be that the 25-yard headshot is a no-go. That is not correct. There is a place for it at times, but I think what is more important is learning how to maneuver into a position that provides the best opportunity possible to stop the shooter (or shooters) quickly without unduly endangering others given the present circumstances. This often involves getting closer to the active shooter.

There is likely much to gain by getting into a position where one can place multiple accurate rounds into the high upper torso of an active shooter. Hits there are far superior to misses on the head. There is also a reasonable possibility that the shooter will take hits to their extended hands and arms and/or quit the fight or disengage. I understand the importance of head shots in order to take out a suicide bomber before the same can cause a detonation, but that is not the same thing as engaging in a dynamic gunfight in a crowd.

You don’t have to be on a team to run across an active shooter, and when it comes to a fight in a crowd it doesn’t matter where it takes place, whether House of Worship, business, school, or restaurant.