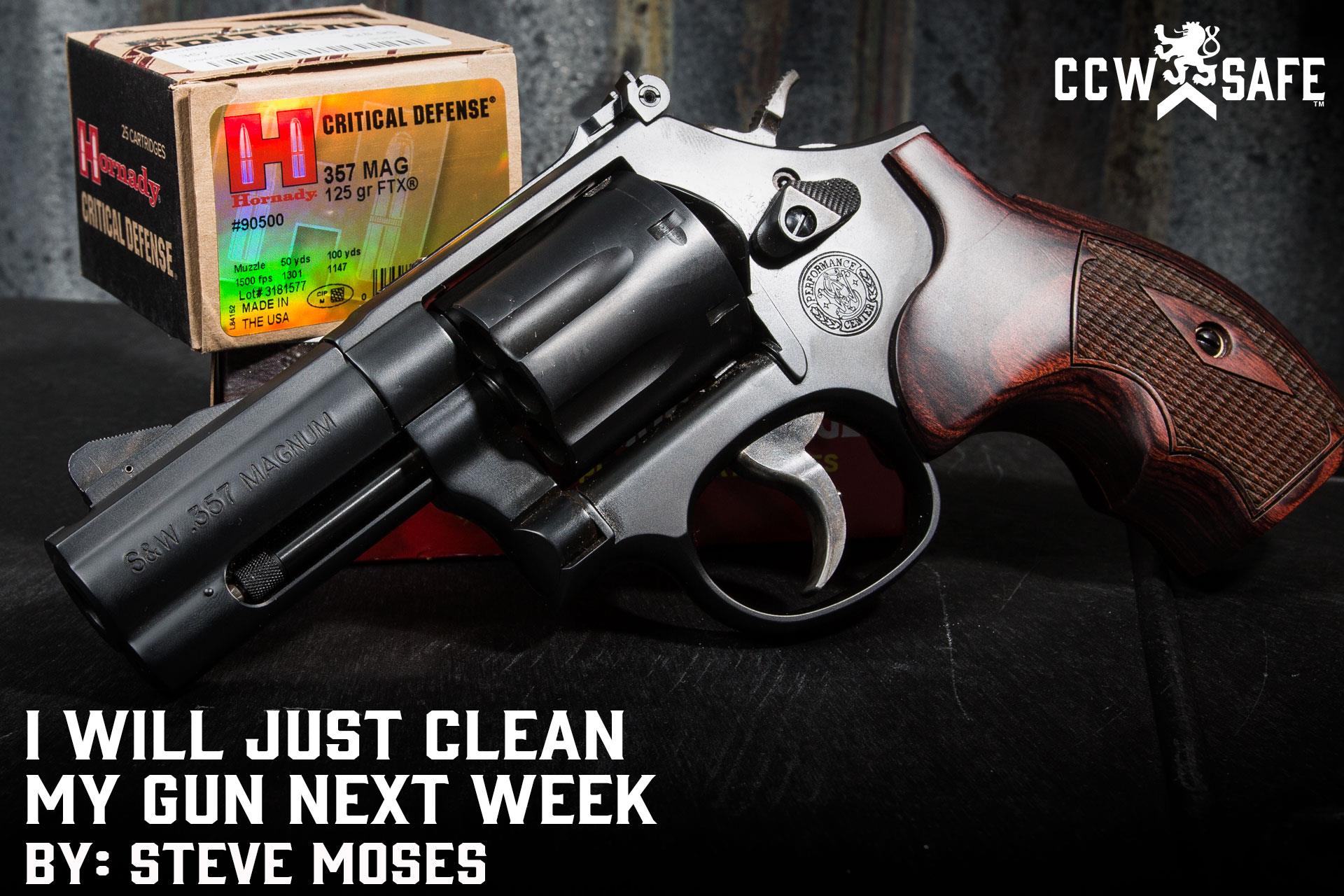 Posted on May 5, 2022 by Grady Epperly in In Self Defense

I Will Just Clean Clean My Gun Next Week

A tradition for gun writers that goes back for generations is to never write an article about a defensive handgun without at some point stating that “blank” number of rounds were tested without cleaning and noting whether or not there were any malfunctions. I think that this was supposed to imply that during the test the handgun was either reliable or it was not.  What I do not think they meant to imply was that the reader only had to clean the handgun if it approached that number or became really dirty.

Every so often it is time to purchase a new vehicle to replace an existing vehicle. I have always made it a policy to find out the estimated city and highway miles per gallon as well as an estimated distance the vehicle can travel between fill ups. I make a mental note of that information and then “tuck it away” for future use. Under no circumstances whatsoever do I rely on that knowledge when traveling in largely uninhabited areas where it is possible to end up fifty miles or more from the nearest gas station, and this is especially true in hot or cold weather. Even in this day and age, it is possible to perish from hypothermia in the wintertime and heatstroke/thirst in the summertime while inside a parked vehicle. Running out of gas is sometimes much more than just an inconvenience.

The same might be true if my handgun fails to eject or load a round during a lethal force encounter. Whenever a handgun is fired the cartridges will leave carbon deposits in the gun (and possibly copper, lead, or even brass shavings). Once they start to build up tolerances between parts may diminish, and at some point they may cause the handgun to not function properly. This may become even more likely as over time with even normal use magazine and recoil springs tend to lose tension. It pretty much goes without saying that the last thing any concealed carrier would want to happen is for their handgun to stop firing in the middle of the fight for their life. Concealed carriers who routinely clean and lubricate their handgun are far less likely to experience a litany of malfunctions, including failures to feed, fire, extract, and eject. Another downside to not cleaning a handgun is that if it is neglected it is likely to have a shorter lifespan. Metal parts on a pistol can rust, and handguns that are frequently shot but never lubricated can experience extra wear.

The idea of cleaning a handgun can be abhorrent for some concealed carriers, most especially those whose motive for owning and carrying a handgun is strictly self-defense. It is all too easy for firearm enthusiasts to forget that and become unnecessarily critical. My advice to them is relatively simple. After an intensive practice session, or on a monthly, quarterly, or even annual basis perform a basic field strip of the handgun, wipe down the inside of the slide and the rails on the frame, run a Hoppes Bore Snake cleaner down the barrel, and judiciously put a few drops of oil on the barrel and barrel hood, inside the slide, on the rails on the frame, and on both the front and rear sights. Reassemble the handgun (which usually only takes a few minutes) and start planning the next range session. Concealed carriers who do not want to go down this route will typically find that their local gunsmith will be glad to field-strip and clean their handgun for a reasonable fee, and for slightly more money detail-strip the handgun and return it to the owner almost as clean as it was when brand new. Some savvy concealed carriers think it is a good idea to fire a few rounds through a handgun that has been cleaned just to make sure it has been reassembled properly or in case a part failed during cleaning.

It simply does not take that much time to field-strip and clean a defensive handgun. There is simply no downside to taking ten minutes to take care of a critical piece of machinery that may someday be called upon to take care of me.