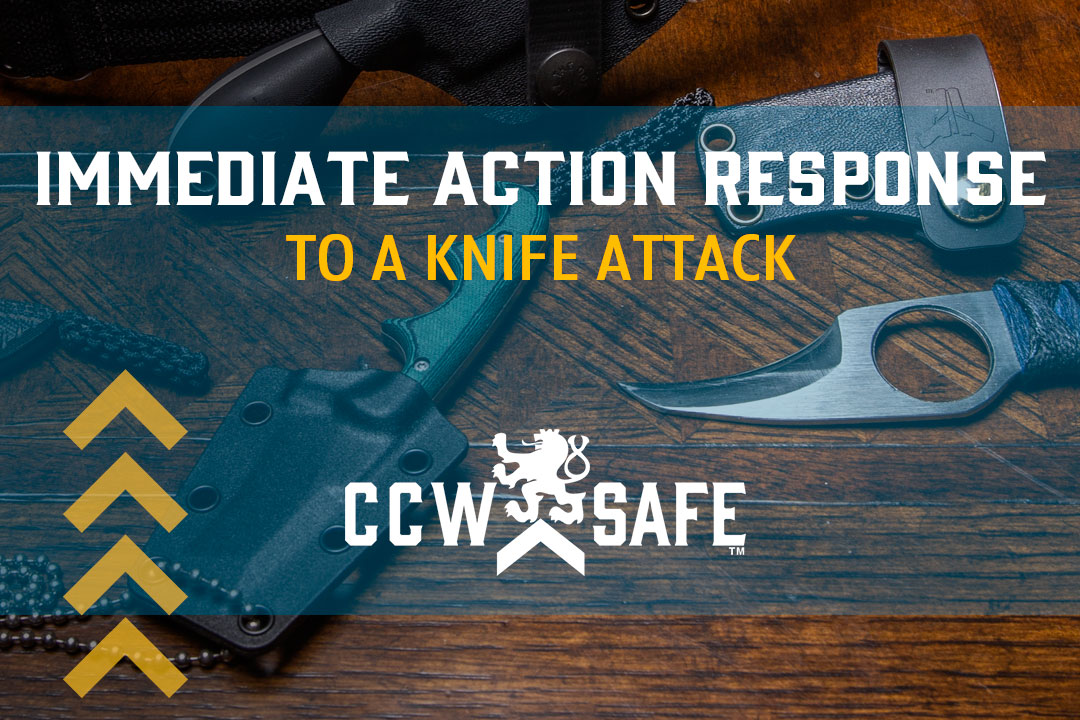 Posted on April 8, 2019 by Steven Moses in Training

The short distances at which knives are used in criminal assaults may make it difficult to get to a handgun fast enough to avoid serious injury or being killed.  Internet videos showing actual edged weapon attacks look nothing like what we typically see in the movies and on television.  Most attacks are a surprise, and action is often explosive, direct, and linear. The attacker typically applies heavy pressure and may use the free hand to seize the target’s clothing, hair, or neck so as to prevent escape.  In many instances the knife or improvised weapon is repeatedly driven into the body and the neck.  While avoidance, deterrence, and disengagement are the preferred options, they will likely not be possible if we are suddenly blind-sided or ambushed, accompanied by  family members (especially children or mobility-challenged adults), or trapped in a corner where there is nowhere to go but  through the attacker.

Jerry Wetzel owns Centerline Gym in Long Beach, California and holds multiple instructor certifications, including full instructor certification in Jeet Kune Do and Filipino martial arts, and is a black belt in Brazilian Jiu Jitsu. Jerry is the founder of Red Zone Threat Management and he teaches a closed-end empty hand knife defense system based upon specific responses for specific scenarios. The techniques taught are simple and capable of being pressure-tested without serious risk of injury to the students. This system depends on the ability of the defender to first recognize an attack and then respond correctly through use of good technique and timing.  Jerry believes that most true knife attacks will contain one or more of the following elements.

Heightened awareness is a critical part of this program. If compelled to interact with a person of questionable intent, concealed carriers should keep that person’s hands in their visual field and constantly look for pre-assault postural shifts and flared elbows (commonly observed when a person accesses a concealed knife from their beltline or pocket). One of the best things that can be done at this point is leave, create distance, and/or get behind any type of barrier that would block, slow down, or hinder the ability of another to establish physical contact.

Jerry teaches a simple approach based upon the principles of Position, Pressure, and Angle.   He stresses the importance of obtaining positional dominance by getting both hands on the weapon bearing wrist (which is actually a natural reaction observed in multiple knife attacks). The student is then taught to apply pressure so that the attacker is unable to regain control of the weapon, and how to maintain proper angle so as to retain positional dominance. This is because the attacker is not likely to just stand there under our control, and instead will probably move off at an angle where he or she can recover and resume the attack. The objective at this point is to then use simple Brazilian Jiu Jitsu techniques like the arm drag in order to break contact and create sufficient distance to effectively get a handgun in play, or take the attacker to the ground where he or she can be controlled.  This is primarily accomplished by the defender obtaining control of the entire weapon-bearing arm by isolating it away from the attacker’s body, and then immobilizing it by simultaneously applying pressure using his or her hands, shoulder, and even head to force the attacker’s weapon-bearing hand downwards while driving the attacker backwards. The natural reaction for the attacker will normally be to resist and push back, which gives the defender the opportunity to transition to an arm drag, move to the rear of the attacker, and either run away completely or move until he or she can draw the handgun (you are carrying your handgun, correct?) and then dealing with the problem using a combination of situation assessment, good judgement, and solid defensive skills.

The purpose of this article is to do nothing more than inform the concealed carrier of the existence of the Red Zone Threat Management Empty Hand Knife Defense system and set out several reasons why it works so. Several options exist for those interested in adding empty hand knife defense skills to their portfolio. I flew to Jerry  from Texas and spent 2 days taking his Knife Defense Instructor course (my Brazilian Jiu Jitsu background was helpful).  Jerry frequently takes his classes on the road, and he sells both a DVD and well-written book on the subject.  As usual, the devil is in the details, and DVDs and books simply can’t trouble-shoot small errors like an instructor can, but what such material can do is well-acquaint the concealed carrier with the major principles and gross movements.  The reader can then hook up with one of Jerry’s certified instructors (there are at least 2 of us in Texas) for final fit and finish. Having said that, training with Jerry is eye-opening, and knife defense is just one of the courses he offers for those of us who always strive to be as ready as possible for the day that we hope never arrives.