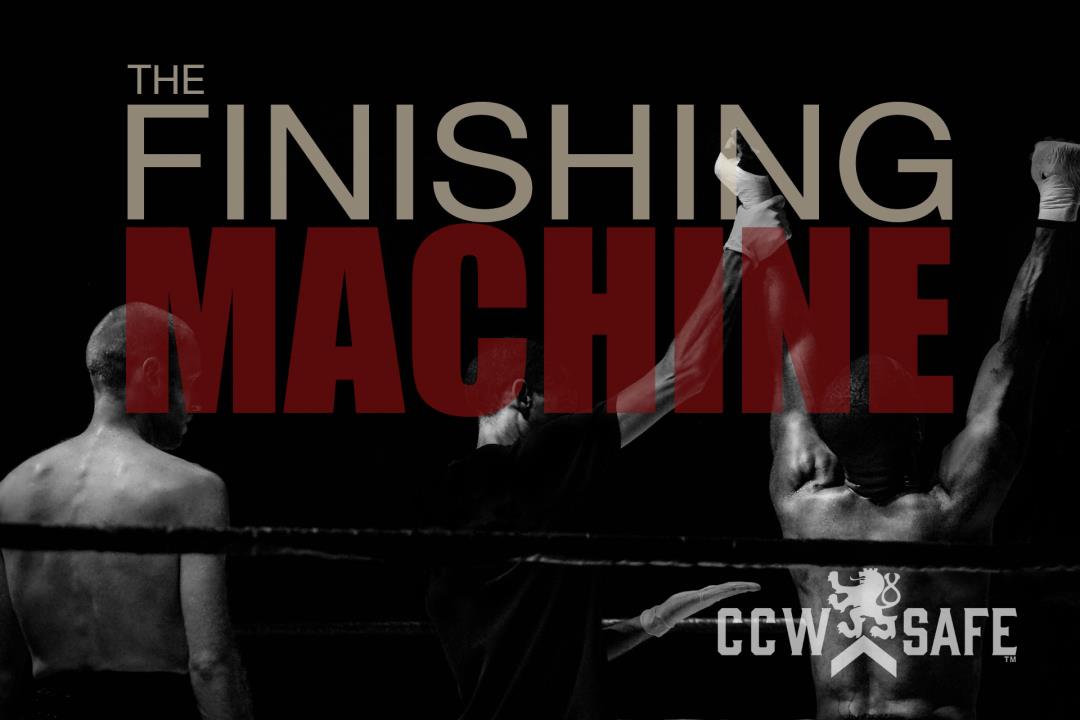 In this installment of “The Four Elements of Self-Defense,” we will examine how Gerald Strebendt’s post-incident actions affected his legal defense.  Like most of the shooters we analyze in this series, Gerald Strebendt was NOT a CCW Safe member.  We’ve chosen his case because it provides clear lessons for concealed carriers regarding what can go wrong in a self-defense shooting.

Gerald Strebendt didn’t need to call 911 after he shot David Crofut because he was already on the line with an emergency operator before he fired the fatal shot. Once connected to a dispatcher, he revealed that he shot his assailant; he claimed the man came at him despite multiple verbal warnings; he secured his weapon; and he followed all instructions provided. He pleaded for them to send an ambulance quickly.

Once taken into custody, Strebendt didn’t say much to law enforcement.  He knew his rights, and as a Marine, he had been trained on how to withstand interrogation.  Because of his solid self-defense claim, police released him that night, but they seized his cellphone, and the shooting made the top of the local news.  Within a day, Strebendt found himself sitting in the office of attorney Mike Arnold.

In his book, The Finishing Machine, Arnold describes the first time Strebendt described what happened:

“I’m on the way home with groceries so Kristin and I can make a nice dinner,” he says. “There’s a car in front of me. It slams on its brakes. I swerve around him to the right to avoid the collision. Before I can do anything he revs up and hits my truck. I’m in shock. He just hit my brand new truck. I can hear him yelling. He is threatening me. I can’t start my truck. So I grab my gun and get out. I call 911. While I’m talking to the operator he keeps coming toward me. He sees my weapon. He says he’s got a gun, too. I back up, telling him to stay away. But he keeps coming. He doesn’t stop. I’m fearing for my life. So I pull the trigger. And he goes down. It was self-defense, Mike. Self-defense.”

What Strebendt didn’t mention here is that the stranger he encountered on the highway got close enough to grab his weapon, which was later confirmed when the man’s touch DNA was found on the barrel of his rifle. In fact, there was never any evidence found that disputed any of the claims Strebendt made.

Nonetheless, within a month, a grand jury handed down an indictment of murder, starting a protracted legal fight that ended with a compromise plea deal.

Strebendt called 911 as he exited his vehicle, explaining to the emergency operator that his “brand new truck” had been struck from behind on purpose, that he had a firearm, and that the stranger who hit him was coming towards him. On the recording, Gerald shouts “Get back from me!” several times.

There is a gap in the recording as the operator connects Strebendt to a police dispatcher.  That’s the very moment that Crofut grabbed the rifle, and by the time the recording picks back up, Strebendt had fired the fatal shot.

“Send an ambulance right now!” That’s the first words Strebendt utters when the dispatcher connects.  She urges him to put his gun away. “Yes ma’am, I did,” he says. “He just came right at me with a firearm. I told him five times to get back.”

After a short exchange, the dispatcher realizes that Strebendt has already shot Crofut. She instructs him to ensure his weapon is secured and stowed away from him. He confirms that the safety is on and that his rifle is on the ground. He repeats his claim: “He went for my rifle, he came right at me, I could not see what he had.” She tells Strebendt that police are arriving, and tells him to keep his hands visible, and as the police approach, she instructs him to drop the phone. He does.

This is near perfect example of how a self-defense shooter should behave on a 911 call.  The sooner a call is made after a shooting, the better. In Strebendt’s case, the fact that he was already on the line would prove that pulling the trigger wasn’t his first impulse.

It’s remarkable that Strebendt’s first words after the shooting were “Send an ambulance right now!” Don West, veteran criminal defense attorney and National Trial Counsel says that, while it might seem counterintuitive to try to help a person who was just threatening your life, it’s exactly the right thing to do. The purpose of self-defense is not to kill; it’s to eliminate an immediate threat of death or harm.  Once that threat is eliminated, making an effort to save the attacker’s life goes a long way to demonstrating that a shooting was a result of fear rather than malice.

For concealed carriers, Strebendt provides a great example of how to make the critical 911 call following a self-defense shooting. Ask for help for the person who has been shot. Make the claim of self-defense but don’t give too many details. Secure and stow your weapon.  Cooperate fully with the emergency operator and law enforcement.

In his book, Mike Arnold published a photo of Strebendt, head in hands, sitting in a brightly lighted interrogation room. As a Marine trained to stand up to interrogation, and as an informed citizen who know his rights, Strebendt avoided making detailed statements to law enforcement.

“I want a lawyer.” That’s what Arnold says Strebendt said when asked questions in the hours following the shooting.  Arnold said he was polite but firm.  The exchange was captured on video, and from Arnold’s point of view, it showed his client in a good light. What’s certain is that nothing Strebendt said to law enforcement in the hours after the shooting came back to haunt the legal defense efforts.

When it comes to giving statements to police, Don West says it’s important to be cooperative, but don’t give detailed accounts of what happened without the advice of an attorney. “While a lot of people feel they can talk their way out of it,” West says, “it rarely happens. Efforts to explain things in an exculpatory way usually ends up blowing up.”

In his book, Arnold writes, “Generally, law enforcement investigators are looking for evidence of guilt, not innocence. They are case-provers, not truth-seekers.”

In so many of the cases we cover, the shooters say too much to police and give the “case-provers” some reason to doubt their account. Strebendt’s lesson to the concealed carrier is to be polite and cooperative with law enforcement, but don’t answer detailed questions and ask for a lawyer.

Police released Strebendt the night of the shooting without filing charges, but they confiscated his cell phone, and Strebent correctly assumed that he was in trouble.  Strebendt and Mike Arnold shared a mutual acquaintance, and within two days of the shooting, Strebendt paid Arnold a visit to talk about his case, and ended up hiring him.

Don West says it is a huge advantage to get a criminal defense attorney involved before an arrest and before charges are filed. Often circumstances make this impossible, but in a homicide case where there is a plausible self-defense claim, it is not uncommon for there to be an investigation before any charges are filed. It can take days or weeks, and in the interim, there is work that a criminal defense attorney can do.

In Strebendt’s case, Arnold got right to work.  He writes in his book: “My initial goal, of course, was to prevent his case from ever going to a grand jury. If the district attorney did choose to take it to a grand jury, then the goal became avoiding an indictment. If he was indicted, my goal then was to to turn over every stone of evidence and work toward dismissal or a plea agreement. And if all that failed, I would need to be ready for trial.”

Once the prosecutor got a sense of some of Strebendt’s history of fighting and road rage incidents, he seemed hell-bent on prosecuting the case, and a grand-jury was being assembled. During this time, Arnold was able to hire his own experts, and while evidence was fresh, they began forensically recreating the collision. Meanwhile, Strebendt was offered an opportunity to testify before the grand jury, and he felt that telling his side of the story could convince the jurors that his self-defense claim was true.

Arnold was against it. “It would basically be a deposition taken by the D.A.,” he writes. “I didn’t want him to go in there before our accident reconstruction was complete.” Don West says it was a smart move. “The prosecutors control the evidence, and it’s not an objective process where the defense gets to challenge the evidence.”

In the end, the grand jury did indict Strebent, but before the arrest, attorney Mike Arnold had saved his client from testifying and likely making statements that would have negatively affected the legal defense.  Moreover, Arnold had preserved some evidence that might otherwise have been lost, and hired his own experts to create an accident reconstruction that happened to corroborate Strebendt’s account of events.

A concealed carrier should understand that whether or not they are charged immediately after a self-defense shooting, an investigation may be ongoing, and the earlier they engage a lawyer, the better.

Lessons for the Concealed Carrier

Mike Arnold writes, “It’s never fun to feel your client has a right to tell his story, yet also know that it is not safe for him to do so.”  In so many of the cases we explore, the shooters are sincere in their self-defense claim and feel that if they tell their side of the story, they will be able to convince investigators. This rarely ever works.

Strebendt had the presence of mind not to give detailed statements to law enforcement immediately following the shooting. He was smart enough to engage a lawyer right away, and perhaps more importantly, he hired a lawyer he trusted, and took his advice — even when it contradicted with what he wanted to do.

Even though Strebendt was arrested and eventually pled to a lesser charge, this was actually a very good result for this case, especially considering the glut of evidence prosecutors collected about Strebendt’s history of fighting and road-rage incidents.  The fact that Strebendt never gave statements to police, and because he hired an attorney before being charged, he very likely saved himself from a conviction that would have left him spending the rest of his life in prison.

Strebendt’s clear lesson for the concealed carrier is don’t give detailed statements to law enforcement and find a good lawyer you can trust as soon as possible.

In the next installment of “The Four Elements of Self-Defense” we’ll look at the compromise plea deal in the Strebendt case and summarize the lessons for concealed carriers.