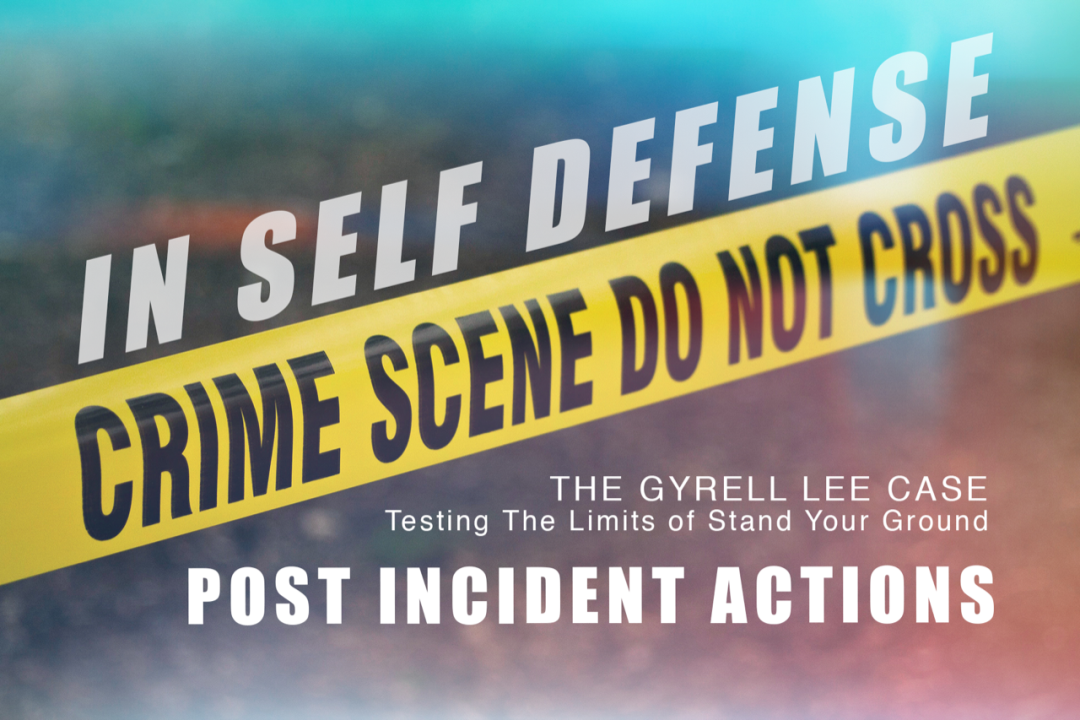 Posted on February 1, 2019 by Shawn Vincent in In Self Defense

“In Self Defense” The Gyrell Lee Case: Testing The Limits of Stand Your Ground- Post Incident Actions

In this installment of “The Four Elements of Self-Defense,” we explore how Gyrell Lee’s post-incident actions factored into his legal defense.  Like most of the shooters we analyze, Gyrell Lee was NOT a CCW Safe member.  We’ve chosen his case because it provides clear lessons for concealed carriers regarding what can go wrong in a self-defense shooting.

Just after midnight on New Year’s Day, 2013, Gyrell Lee saw his cousin Jamieal Walker gunned down by Quinton Epps.  Lee and Walker had been celebrating the New Year outside Walker’s home in Elizabeth City, North Carolina.  Epps, who had a reputation for starting trouble, came by multiple times throughout the evening and engaged in escalating verbal confrontations with Walker. After one heated exchange, Lee, a licensed concealed carrier, retrieved his .45 caliber pistol from his car.

During the final encounter, Epps passed by Walker’s house and parked a few houses down.  Walker and Lee walked down the street to talk to Epps.  The conversation became heated and Walker punched Epps in the face.  Epps grabbed Walker’s hoodie, pulled out his gun, and shot him in the stomach and continued firing as Walker ran away.  Lee had drawn his pistol in an effort to defend his cousin, but according to a jailhouse recording, couldn’t get a “clean shot.”  Epps turned his gun on Lee, but Lee shot first — a total of eight shots that left Epps incapacitated and dying on the street.

Then Lee fled the scene.  He hid his gun under a trash can, and he had no contact with law enforcement until about 12 hours later when police picked him up for his involvement in a gunfight that resulted in a double homicide.  A grand jury would indict Lee on first-degree murder, and in July of 2015, a jury would convict him on second-degree murder.  During closing arguments, the prosecutor suggested than a reasonable person in the defendant’s shoes would have “removed himself from the situation” and “run away.”

Lee’s conviction was appealed.  After the state court of appeals upheld the verdict, the North Carolina Supreme Court agreed to hear the case.

The Cato Institute — a nonpartisan policy research foundation dedicated to the principles of individual liberty, free markets, and limited government — filed a friend of the court brief supporting Lee’s case. They found it outrageous that a man who just saw his cousin gunned down before his eyes and now feared for his life could be convicted of murder, especially in a so-called “stand-your-ground” state.

The Cato brief reads in part, “The prosecution wrongly implied to the jury that only guilty people stand their ground when met with deadly aggression — that the only appropriate way to respond to a man repeatedly shooting one’s cousin in the stomach is to run away!”

The North Carolina Supreme Court agreed, and they overturned the conviction, ordering a new trial. They write, “The record reflects a reasonable possibility that, had the trial court given the required stand-your-ground instruction, a different result would have been reached at trial.”  There may be a “reasonable possibility” that a new jury with different instructions will come to a different verdict, but it is far from certain.  The North Carolina Supreme Court only weighed in on whether the trial court erred by not giving the required “stand-your-ground” instruction; they did not reinterpret the facts, and some of the facts are very problematic.

In her closing arguments at trial, the prosecutor told jurors that a person acting in self-defense would not need to hide the weapon, and he wouldn’t wait 12 hours to be picked up by police.

Attorney Andrew Branca, a renowned authority on self-defense laws recently wrote an article for CCW Safe where discusses “consciousness of guilt evidence.”  It has to do with “the recognition that the behavior and conduct of someone who believes they’ve done something wrong often differs in observable ways from . . . someone who doesn’t.”

“Such guilty behavior,” Branca writes, “might include things like lying to the police, flight from the scene for purposes other than safety, or tampering with evidence.”

Lee’s behavior in the minutes and hours following the shooting fit squarely within Branca’s definition for “consciousness of guilt evidence.”

Don West, veteran criminal defense attorney and National Trial Counsel for CCW Safe says it a different way. “If you are claiming self-defense, you’re admitting you killed someone, and you had better act like it is self-defense. If you don’t, people will question your motives.”

The lesson for the concealed carrier is that a self-defense claim is an affirmative defense.  It means the shooter is admitting to homicide but contends that it was justified.  Anyone who makes that claim must stand solidly behind it, and that means reporting the shooting to law enforcement as quickly as it is possible to do so.  Had Lee immediately contacted police after the shooting, investigators may have approached the investigation as a self-defense shooting rather than a gunfight that ended in a double homicide.  When police fist picked up Lee, he was under suspicion for both shootings, and when the grand-jury indicted first-degree murder, prosecutors initially refused to take the possibility of the death penalty off the table.  If Lee had acted more responsibly immediately after the shooting, things would have gone differently.

In our series “The Four Elements of Self-Defense,” we explore how location, escalation, reasonable fear, and post-incident actions can affect the legal defense in self-defense shooting.  In the next installment, we’ll look at the verdict and appeal in Gyrell Lee’s case and recap the lessons learned for concealed carriers.