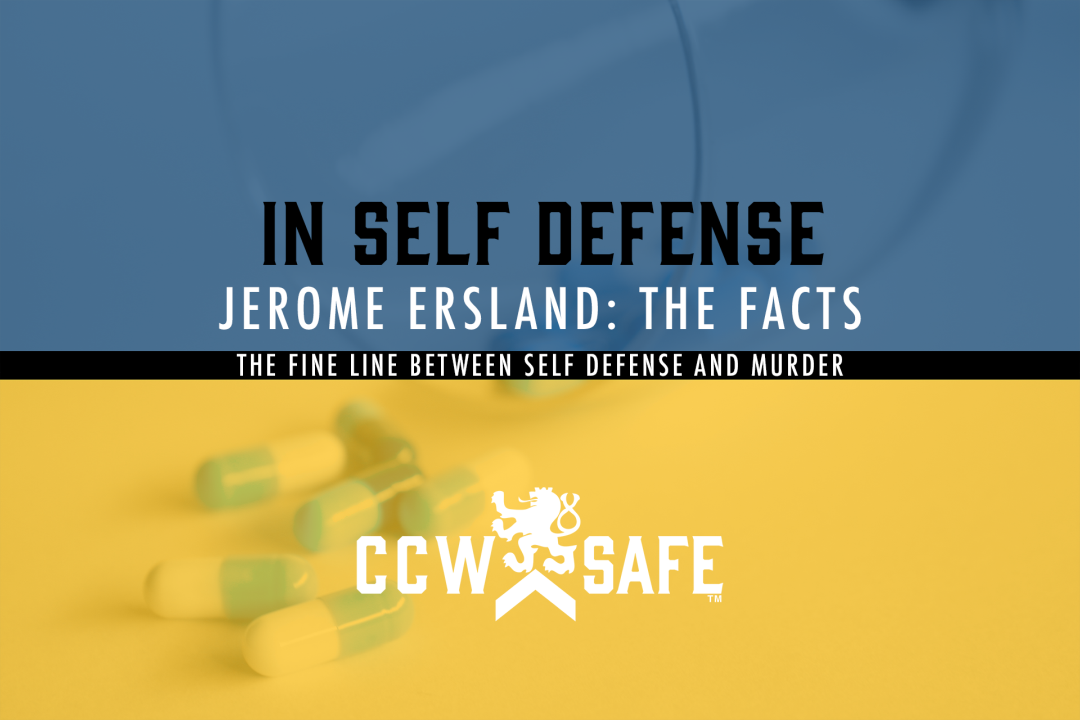 Posted on February 15, 2019 by Shawn Vincent in In Self Defense

PART 1: THE FACTS OF THE CASE

In our series, “The Four Elements of Self-Defense,” we explore high-profile, self-defense shootings for the purpose of distilling lessons for concealed carriers. Like most of the shooters we analyze, Jerome Ersland was not a CCW Safe member. We’ve chosen to take a closer look at his case because it provides some valuable takeaways for concealed carriers as an example of what can go wrong in a self-defense shooting.

South Oklahoma City pharmacist Jerome Ersland had been the victim of a holdup at work before. Criminals are drawn to pharmacies, not just for the money in the cash drawer, but for the highly valuable narcotics kept in inventory. For this reason, Reliable Discount Pharmacy had magnetic locks on the doors, requiring customers to be buzzed-in. They could also potentially lock would-be robbers inside, keeping them trapped until police arrived.

Sixteen-year-old Antwun Parker and 14-year-old Jevontai Ingram knew about the magnetic locks. On May 19, 2009, after they were buzzed into the pharmacy, they propped the door open with a piece of wood and donned ski masks. Ingram then produced a pistol, leaving no question as to the two boys’ intentions.

Jerome Ersland, a 58-year-old Air Force veteran, was in charge of the pharmacy that day. On this occasion, he decided that the employees in the pharmacy, including him, another pharmacist and two technicians, would not be victims. He grabbed and fired his Taurus Judge, alternately loaded with .410 buckshot and .45 rounds. A shot pellet struck Parker in the head, incapacitating him. Ultimately, Parker never made it out of the pharmacy alive. Ingram fled, and Ersland chased him down the street.

In statements to law enforcement, Ersland claimed he had a firearm in each hand while he shot at the robbers. He also stated that both assailants were armed with cheap .38s and referred to the encounter as a gunfight in which he “felt a bullet whiz past my right ear.”

In the following days, many regarded Ersland as a hero, and he was publicly celebrated for standing up to crime and potentially saving the lives of his fellow workers. Therefore, it surprised many when the Oklahoma City District Attorney David Prater subsequently charged Ersland with first-degree murder.

Gary Eastridge is CCW Safe’s Critical Response Coordinator. Whenever a CCW Safe member is involved in a self-defense scenario, Gary shows up quickly to mitigate the situation. At the time of the Ersland shooting in 2009, Eastridge was working as an investigator for DA Prater.

According to Gary, the day after the shooting, the technician who recovered surveillance video from the scene raised a red flag. The video refuted many of the details from Ersland’s statements to police, showing that Ersland didn’t have a gun in each hand during the initial encounter, and only one of the assailants had a weapon.

As detectives interviewed other witnesses, they discovered that when Ersland chased Ingram out of the pharmacy, he fired two or three times at the fleeing robber before returning to the store. The fleeing Ingram never used his gun.

Most damning of all, the surveillance video suggests that Ersland stepped over Parker’s incapacitated body to retrieve a second weapon, which he calmly used to fire five more carefully placed rounds into center mass. All the medical witnesses at trial agreed it was these five shots, and not the head shot, that ended Parker’s life.

Ersland lied about other things, too. One was his claim that he had recently undergone back surgery at the time of the incident. This was not supported, however, by his medical file. Also, he told authorities that he had killed many people during the Gulf War and had been injured there. But a review of his military records showed he had actually been stationed at Altus Air Force Base in southwestern Oklahoma during the war.

When Self-Defense Turns Into Murder

Eastridge states that there were really three shootings in the Ersland case: The shooting of Antwun Parker, the shots fired at Ingram as he fled, and the final five rounds Ersland fired into Parker’s body.

“Certainly, in my mind,” Eastridge says, “for anyone who saw the video, the first shooting was justified.”

Don West, veteran criminal defense attorney and National Trial Counsel for CCW Safe agrees. “Certainly, you have the right to use deadly force to prevent a violent felony,” he affirms before adding, “But that right ends as soon as the threat is over.”

Eastridge says that in an encounter like Ersland’s, “The window of reasonableness for using deadly force opens wide. But as it starts to close, things become less clear, and once the window is closed, deadly force is no longer justified.”

Parker and Ingram opened that window when they initiated an armed robbery at Ersland’s pharmacy. But the window began to close after Parker was incapacitated and Ingram fled. By the time Ersland fired the final shots, that window had already firmly closed. Like so many of the cases we’ve explored, the Ersland case is an example of a justifiable self-defense shooting that went too far.

Two years later, on May 26, 2011, after a highly publicized and controversial trial, Ersland was convicted of first-degree murder and sentenced to life in prison with the possibility of parole. He was sent to North Fork Correctional Facility in Sayre, Oklahoma (he has since been moved to Oklahoma State Penitentiary).

After a failed appeal in 2013, he was granted a commutation hearing in April of 2018 to have his charges reduced. Commutation was denied by the Oklahoma Pardon and Parole Board, however. Currently, Ersland is not eligible for parole until 2049. At this time, he’ll be 97 years old.

In the next weeks, we’ll look deeper into the Ersland case and extract lessons for the concealed carrier on how to prevent a self-defense scenario from turning into a murder.

In our series “The Four Elements of Self-Defense,” we explore how location, escalation, reasonable fear and post-incident actions can affect the legal defense in self-defense shootings. In the next installment, we’ll look specifically at how the location of the shooting impacted Ersland’s legal defense.