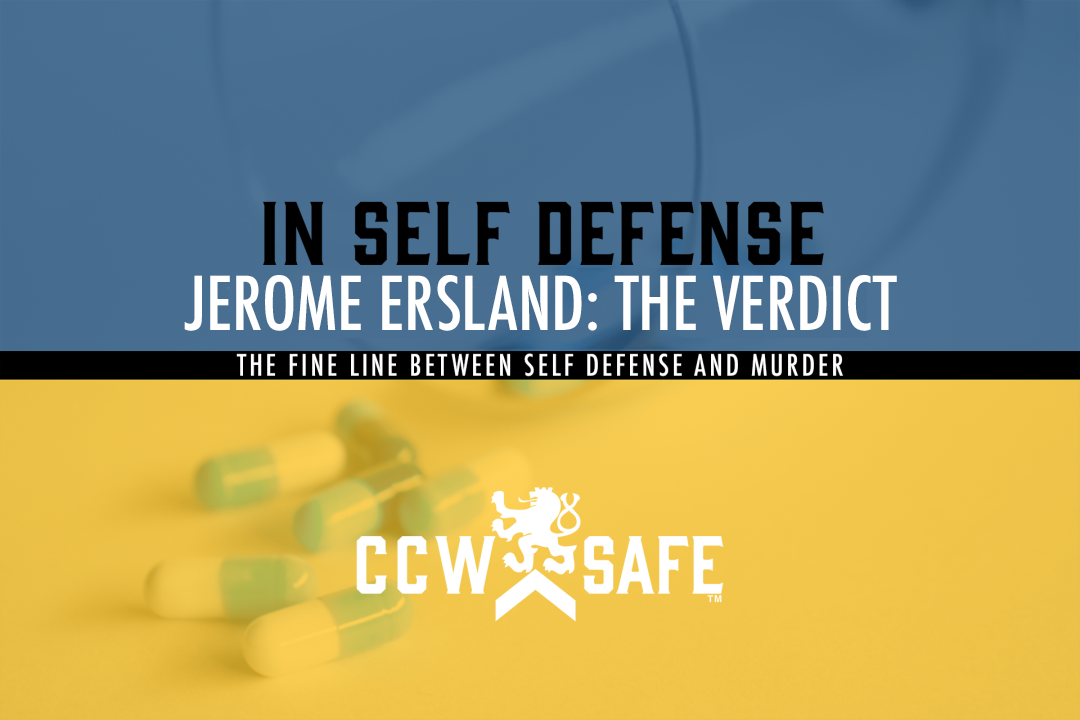 Posted on March 22, 2019 by Shawn Vincent in In Self Defense

The line between self-defense and murder

In this installment of “The Four Elements of Self-Defense,” we look at the verdict in the Jerome Ersland case and we’ll discuss the lessons for concealed carriers. Like most of the shooters we analyze, Jerome Ersland was NOT a CCW Safe member. We’ve chosen his case because it provides clear lessons for concealed carriers regarding what can go wrong in a self-defense shooting.

In May of 2009, two teenagers, Antwun Parker and Jevontai Ingram burst into the Reliable Discount Pharmacy in Oklahoma City and dawned ski masks in an attempted robbery. Ingram produced a gun, and according to a witness, threatened the lives of the staff.

Jerome Ersland, a veteran of the Air Force and a career pharmacist, had been victim of a robbery before. He knew criminals were drawn to pharmacies because of the valuable narcotics kept behind the counter. That’s why he kept a Taurus Judge in a drawer at work. It was loaded with .410 buckshot and .45 rounds.

He fired at the robbers, and a pellet struck Parker in the temple, and he dropped to the ground. Ingram fled. Ersland pursued, firing two or three more times at Ingram as he retreated. Then Ersland re-entered the pharmacy. Video surveillance captured him stepping over Parker’s body, turning his back to the incapacitated teen, walking to the back of the store where he retrieved a Kel-Tec .380, then walking casually over to Parker and firing five shots to center mass.

While Ersland insisted that Parker was still moving and potentially reaching for a gun, one medical expert testified at trial that the tight bullet pattern indicated Parker was not moving. Prosecutors presented crime-scene photos showing the pool of blood caused by Parker’s initial head injury was undisturbed.

Ersland gave multiple recorded statements to law enforcement and to reporters. His statements conflicted with one another — and they conflicted with the evidence. Investigators caught Ersland in several flat out lies, and they even accused him of trying to fabricate a bullet graze wound.
At trial, the defense attorney told jurors that Ersland did what he had to do to neutralize the threat. “He eliminated the armed robber.” While District Attorney David Prater admitted the first shooting was clearly self-defense, he described the final five shots as an execution. Assistant District Attorney Jennifer Chance told jurors that, with those final shots, Ersland “was absolutely not defending himself or anyone else.” Prosecutors accused Ersland of making himself “judge, jury, executioner.”

There had been public outrage in the months leading to trial. Many in the community felt that Ersland shouldn’t have been prosecuted for defending himself and protecting his staff from armed robbers. CCW Safe Critical Response Coordinator Gary Eastridge worked for the Oklahoma City district attorney at the time of the Ersland prosecution, and all the calls from angry citizens were directed to his desk.

“The community was reacting only to that initial, certainly justified shooting,” Eastridge says. In part because of a gag order imposed by the judge, they wouldn’t know the full story until trial. With all the evidence mounted against Ersland, it took a jury only three and a half hours to render a guilty verdict for the charge of first-degree murder.

This is a frustrating case because Ersland was undoubtedly the victim of a violent crime. “They certainly brought the fight to Mr. Ersland,” Eastridge says. “I have sympathy for the family of the deceased, but Mr. Parker’s actions brought about the circumstances that resulted in his death.”

The fact that Parker instigated the deadly encounter, however, didn’t justify Ersland’s shooting of an incapacitated, unarmed teenager — but not everyone feels that way. Eastridge says that many of the people he spoke with felt that “they came in to rob him; everything else is irrelevant.”

Don West says that he has heard that point-of-view as well. “There is a percentage of the community that thinks that if your home or business is violated by an armed intruder, you probably have the right to tie them to a chair and then shoot them whenever you feel like it because they have crossed that threshold and subjected themselves to whatever kind of retribution you like.”

“When you react that way,” Don West says, “it’s no different than walking down the street and shooting somebody.”

Hopefully it’s clear that Ersland’s first shots were justifiable self-defense, and his final shots were murder. The real lesson for the concealed carrier is how quickly the window where deadly force is justified can close, and how fluidly reasonable fear can transform into rage. As a concealed carrier, you can never allow reason to give way to retribution. This is how otherwise good people become convicted murders.

Eastridge says that Ersland was not a “mad dog killer.”

“In this case, a productive member of society, and an honorably discharged veteran, doing his work, did not create the situation that ultimately resulted in his conviction,” Eastridge says. “The decisions he made during the event took him from a hero to zero.”