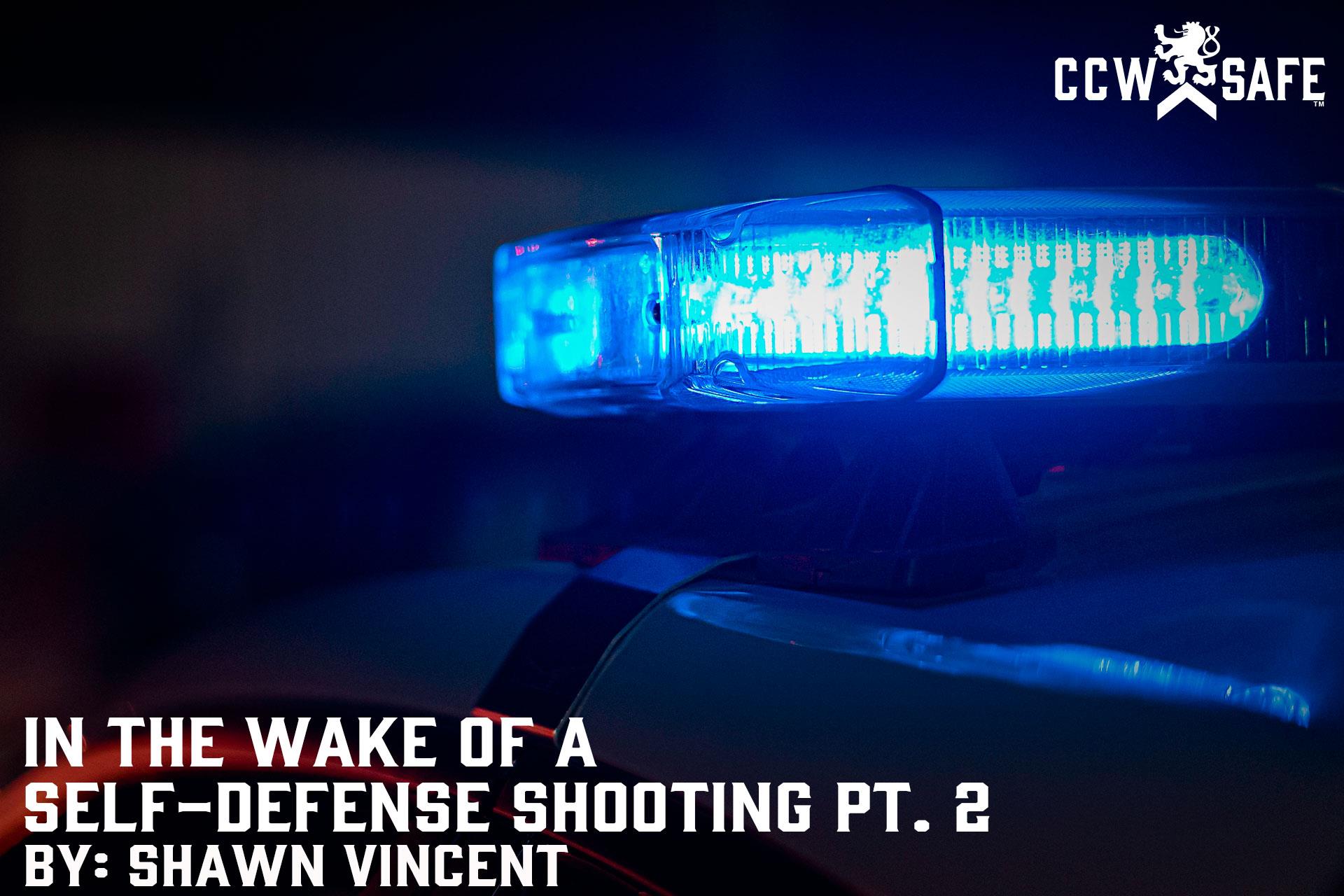 Posted on November 19, 2021 by Shawn Vincent in In Self Defense

In the Wake of a Self-Defense Shooting Part 2

In the Wake of a Self-Defense Shooting

The moment you discharge a firearm in a self-defense context, a clock starts ticking, and what you do in the next seconds, minutes, and hours will have a huge impact on the rest of your life. CCW Safe has compiled a list of ten things for armed defenders to consider in the immediate aftermath of a self-defense shooting, and while the list is not necessarily comprehensive, it is a great place to start when thinking about what to do as the smoke clears from a use of force event. The first thing on the list is to get to safety and to ensure that the immediate threat has ended. The very next thing is to call 9-1-1 or to make sure someone calls 9-1-1 on your behalf.

The failure to call 9-1-1 will almost certainly have an extraordinarily negative impact on your self-defense claim. It is assumed that a justified defender has nothing to hide and that they would be motivated to quickly report a shooting. When a defender fails to report a self-defense shooting, it suggests they don’t feel confident in their justification for using deadly force. Lawyers call this “consciousness of guilt evidence.” Andrew Branca, criminal defense attorney and friend of CCW Safe, explains “consciousness of guilt” as “The recognition that the behavior and conduct of someone who believes they’ve done something wrong often differ in observable ways from … someone who doesn’t.”

When Michael Dunn fled the scene following the shooting of Jordan Davis after an argument over loud music, he failed to call 9-1-1. The next day, he tried to ask a friend for advice on how to report the incident, but by then, it was too late. Homicide detectives had been on the case for hours, and when they finally caught up with Dunn, they were deep into a murder investigation, and Dunn was their only suspect. Don West, criminal defense attorney and National Trial Counsel for CCW Safe, says, “When you don’t contact 9-1-1 early on and you do as Michael Dunn did and you leave, then a self-defense claim looks to the police as an afterthought. It looks like ‘well he couldn’t come up with anything better,’ and that’s a terrible position to start a legal defense from.”

When Dunn fired at Jordan Davis, he fired through a passenger door as the driver of Davis’s vehicle tried to back up. Dunn claims that he didn’t know he had even struck anyone until hours later when learned the shooting was fatal on a local news broadcast. Perhaps, in the immediate aftermath, Dunn assumed no one was harmed and that his actions weren’t that serious. Discharging a firearm is always serious. When a defender fires a weapon in a self-defense scenario, it is considered the use of deadly force, regardless of whether anyone was struck by a bullet and regardless of whether the shooter intended to hit anyone. A warning shot fired into the ground or into the sky, in the context of self-defense, legally qualifies as the use of deadly force. As a concealed carrier, if you use deadly force in self-defense, it must be reported.

Marissa Alexander had a violent encounter with her estranged husband Rico Gray in her home. She claims that Gray tried to choke her, but she escaped and retrieved her pistol from her car. Moments later, when she encountered Gray again, she fired a single warning shot that physically harmed no one. Gray fled the home. Alexander, satisfied that she had successfully ended the confrontation, continued about her business. She did not call 9-1-1 to report the shooting and was soon surprised to find her house surrounded by police vehicles. Gray, it turns out, called the police, and his story was far different than Alexander’s. Very often, the first party in a physical dispute to contact authorities is presumed to be the victim; law enforcement proceeds based on the information they received. As an armed defender, it is to your advantage for law enforcement to begin their investigation with your version of the facts.

That said, It doesn’t have to be the defender who conveys their version of the facts. Don West says, “There’s no requirement that you be the person that calls 9-1-1. You could ask someone else to call.”  9-1-1 calls are recorded, and 9-1-1 recordings almost always become important evidence if a self-defense shooting results in criminal charges and goes to trial. That means anything you say on a 9-1-1 call can be used against you at trial. After the shooting of Renisha McBride, Ted Wafer made a very short 9-1-1 call where he sounded inappropriately matter-of-fact and unemotional, and he failed to respond to the operator’s questions. While the strange call alone didn’t secure his conviction, it certainly didn’t help his case. If you are with someone you trust, it might be a good idea to ask them to call 9-1-1 on your behalf. It saves you from being personally recorded and making statements that could be potentially used against you in a prosecution.

Whether you make the call, or it’s someone close to you, the important thing is to get your self-defense claim in early.  It’s to your benefit if law enforcement begins their investigation with your version of the facts, and it’s important that you establish that you were attacked and acted in self-defense. It is also a good idea to specifically request medical attention for the person you’ve shot. The purpose of self-defense is not to kill an attacker; it is to break contact and end the immediate threat. As counter-intuitive as it may sound, once an attacker is incapacitated and you are safe, asking for immediate medical attention for the person who just threatened your life speaks volumes about your mindset and would likely play to your advantage during a criminal investigation.

The lesson for concealed carriers is that once you have ended the threat and you are safe, you or someone close to you should immediately call 9-1-1, explain that there has been a shooting, assert that the defender was attacked and that the shooting was in self-defense, and ask for medical help for the person who was shot. The operator will expect you to stay on the call as long as it is safe to do so. Remember that the call is being recorded. Answer questions that are critical for the first responders, assert your self-defense claim but don’t make detailed statements about the incident without advice from a lawyer. Perhaps most importantly, listen to the 9-1-1 operator’s instructions as law enforcement arrives. First responders arriving on the scene of a shooting don’t always know who the good guys are and who the bad guys are. The only thing worse than being prosecuted for a self-defense shooting is being mistaken for your attacker and getting shot by responding officers.