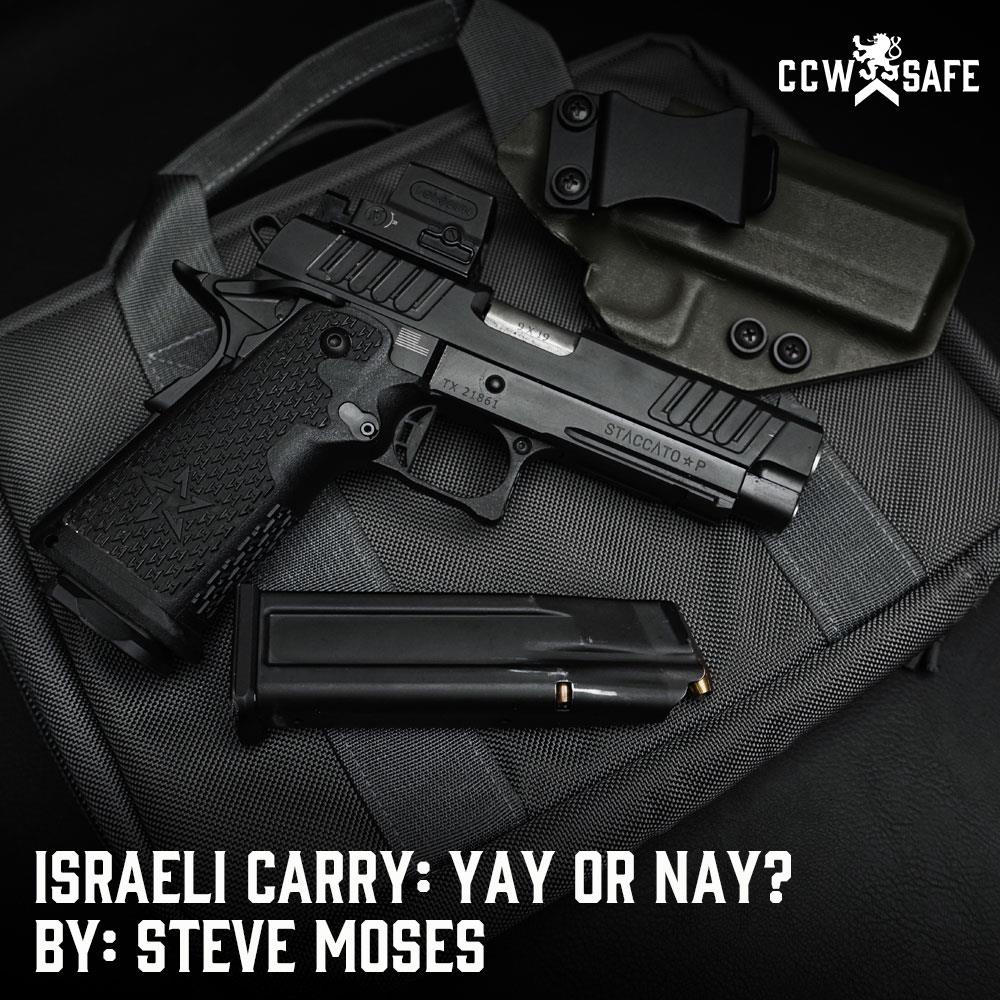 Posted on January 10, 2022 by Steven Moses in Uncategorized

“Israeli Carry” is a term commonly used when concealed carriers holster-carry their semi-automatic handguns with a loaded magazine and empty chamber. Advocates have stated that carrying a handgun in such a condition is safer because it lessens the chances that the carrier will experience an unintended discharge (often referred to as a “negligent” discharge).

I do not think this method of carry originated with the Israelis. W.E. Fairbain and E.A Sykes (authors of the book “Shooting to Live” published in 1942) were early proponents of carrying a semi-automatic pistol with a full magazine inserted into the pistol and empty chamber. Fairbain and Sykes played a significant role in training the Shanghai Municipal Police in the 1930’s as well as Allied troops during World War II, and from the best that I can tell it was common for both Allied and Axis troops to carry their pistols without a round in the chamber except for those times in which imminent action was possible or anticipated. It is possible that the reason this method of carry is often referred to as “Israeli Carry” is because initially the equipment that the newly formed Israeli Defense Force used was a hodge-podge of cast-off equipment from the armies on both sides in World War II. It makes sense that the Israelis may have standardized their handgun training at one time given the variety of handguns in their possession whose methods of operation might vary significantly. Not only does this method work with all semi-automatic pistols but it lessens the chance that an unintended discharge might occur if the user had not been well-trained in their use.

Is Israeli Carry recommended for concealed carry? My opinion is that it is not. Speed, surprise, and violence of action may be the only thing that a concealed carrier can effectively employ in order to protect themselves or their loved ones in the event they are attacked by another person who is intent on seriously injuring or killing them and has the means and opportunity to do so. I would like to see our students be able to consistently draw their handguns from concealment and hit a 3” by 5” inch card at fifteen feet in two seconds or less. The ability to do this along with some understanding on how to manage a dangerous encounter so that a sudden draw catches the attacker completely off-guard has a good chance of succeeding.

But what happens if I add a step and must now take the time to rack the slide with my support hand or by shoving the rear sight against my holster, belt, or even a tabletop? First, it takes up precious time that I might not have. Second, by adding one more step there is one more opportunity for a time-eating fumble. And third, what if my support hand is not free? It is entirely possible that I might need to first shove a loved one out of the line of fire or that I have become entangled with my attacker, and they have grabbed my wrist or I need to have that hand free to keep them from accessing a concealed weapon, being stabbed, or punched in the head and rendered unconscious. It is obvious that concealed carriers who carry their pistols this way will definitely need more time to get their concealed handgun from the holster into a position where they could make an accurate shot, and that extra time may be all that is needed for an armed criminal offender to overcome any initial surprise and then start shooting. A fact that I find sobering is that an armed criminal offender who does not care what he or she hits is capable of firing four rounds in my direction in about one second.

While I agree that if dropped on a hard surface, a pistol in Israeli Carry mode will not fire, the same is true for most modern-day good quality semi-automatic pistols. There are indeed some older handguns that do not have internal safeties that might fire if dropped on a hard surface. Concealed carriers might be well-served to do some research in order to ensure that their handgun has been deemed drop-safe.

Concealed carriers who believe that the reason that Israeli Carry is better for them is because they don’t trust themselves to carry a fully loaded handgun may need to ask themselves why. In many instances the solution is to simply get training from a professional instructor. A concealed carrier who knows and ALWAYS abides by the four rules of gun safety is not likely to have an inadvertent discharge. This is even more true when he or she knows how to physically handle handguns in a proper manner. I highly recommend seeking defensive handgun training from a qualified instructor as there is a world of difference between recreational shooting and carrying a concealed handgun because someday that tool may be needed to save our life.

Concealed carriers willing to take lessons and practice but who are still uncomfortable with carrying a handgun with a round in the chamber might take comfort in carrying a double-action/single-action pistol or double-action revolver instead of striker-fired pistol or single-action semi-automatic pistol equipped with an external safety. The longer and typically heavier initial trigger pull might be all that it takes for a concealed carrier to become comfortable with carrying a handgun with a chambered round. Regardless of the handgun type and action selected, it is strict adherence to firearm safety rules and proper gunhandling skills that prevent inadvertent discharges.