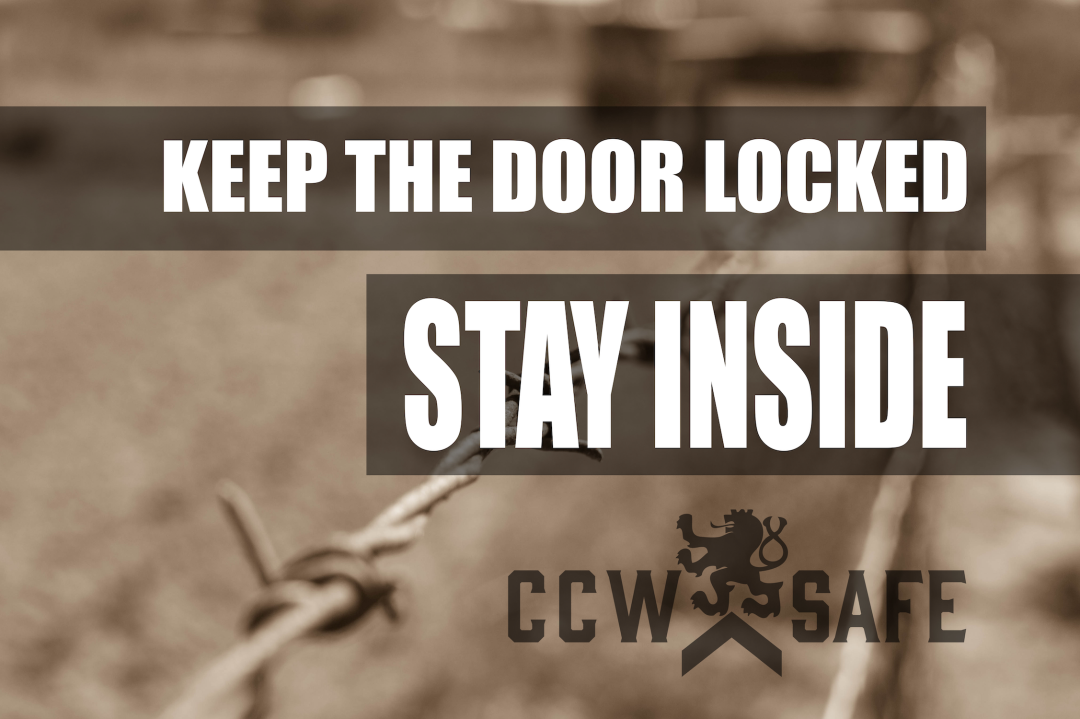 Posted on December 21, 2018 by support@ccwsafe.com in Shawn Vincent

Keep The Door Locked, Stay Inside: Lessons From The Ted Wafer Case In Action

Keep the Door Locked; Stay Inside

Lessons from the Ted Wafer Case in Action

Not long ago, a CCW Safe member wrote us to describe a terrifying encounter he had at the home he shares with his wife and children on a 10 acre ranch.  On a late fall evening, around 11 pm, he heard noisy footsteps falling on his front deck. He peeked outside to find a tall man pacing and shouting curse words, wearing nothing but cowboy boots and bluejeans. He appeared to be drunk. His face was bloodied and beaten.

The intruder tried to open the locked front door. When he made eye contact with the homeowner, he demanded to be let in.  The homeowner instructed the intruder to leave his property, declared he had a firearm, and warned the intruder that he would be shot if he entered the house.

While the homeowner’s wife called the sheriff’s office, the intruder on the porch pressed his attack, ramming the front door with his body.  That’s when the homeowner remembered an article he had read from CCW Safe about Ted Wafer and the shooting of Renisha McBride.

If you recall, Ted Wafer lived alone in the Detroit suburb of Dearborn Heights. On the night of November 1, 2013, he fell asleep watching television only to be startled awake by a “boom, boom, boom, pounding,” first at his side door, and then at his front door.  He thought multiple people were trying to break into his house. He was “a man under siege in his own home,” Wafer’s lawyer claimed at trial.

Unable to immediately locate his cell phone, Wafer retrieved his pistol-grip Mossberg 12 gauge shotgun and opened the front door. “I wasn’t going to cower in my house,” he testified at trial.  When he opened the door, he found himself face-to-face with a dark figure on his porch.  When the figure tried to push through the screen, Wafer pulled the trigger, striking the stranger in the head, killing her instantly.

Wafer later discovered that the woman he had shot was 19-year-old Renisha McBride, a former cheerleader and recent high school graduate.  Earlier in the evening, McBride had spent time drinking and smoking pot with a friend.  After an argument, McBride left her friend’s house and, with a blood alcohol level nearly three times the legal limit, she crashed her vehicle into a parked car, incurring a head injury which left her disoriented.  McBride wandered the neighborhood for hours. Prosecutors believe she mistook Wafer’s home for a friend’s house and was likely trying desperately to get help.

After several weeks of investigations, prosecutors filed charges of second degree murder. Months later, a jury convicted Ted Wafer on the charge, and a judge sentenced him to 17 years in prison.  Don West, veteran criminal defense lawyer and National Trial Counsel for CCW Safe said he struggled with this case. “It’s very easy to see why Wafer would have interpreted McBride’s behavior as aggressive and threatening, and it is difficult to stomach seeing a man go to prison over what was a tragic misunderstanding.”

But Ted Wafer is in prison, and the simple lesson of this case is that he should have called 911 and waited in the relative safety of his living room before resorting to the use of deadly force. This is the very lesson that went through the mind of the CCW Safe member as he faced an agitated stranger on the front porch of his home.

The emergency operator instructed the homeowner’s wife to take their children into another room and lock the door.  She stayed on the phone for 20 minutes while a dispatcher sent deputies to the family’s rural home.  All the while, the husband kept his cool as the intruder tried to steal his ATV, ripped out shrubs, threw objects at the house, and tried to use the front porch swing to bust through a window.

When deputies finally arrived, they apprehended the intruder in the yard outside the home. “I was able to successfully defend my home without firing a shot,” the CCW Safe member writes, “and I can tell you, undoubtedly, that your case lesson ran through my head the entire time this event was transpiring: keep the door locked; stay inside.”

He showed extraordinary constraint by waiting inside, enduring a seemingly interminable onslaught, while his wife and children were huddled in the other room. How many of us would have pulled the trigger and ended the confrontation without waiting? Would we have been justified?

Maybe, and maybe not.  Ted Wafer’s story tells us that going outside to meet a threat, even in our own homes, can put us in a position where we may unjustifiably shoot an unarmed person. Had this homeowner gone outside and ultimately shot the intruder, he would have to explain why he left the relative safety of his locked house.

While we all have the right to defend ourselves in our homes, the use of deadly force is generally not justified unless the threat is imminent. The threat from an unarmed person on the other side of a locked door might be terrifying, but it is not imminent — not until the threshold is breached by the intruder.

So many of our case studies feature a shooters who made mistakes in defending themselves.  This incident provides an amazing example of how to do everything right.  He called 911. He moved his children to a more protected area of the home. He issued verbal warnings to the intruder.  Most importantly, he was willing to wait until the threat of harm was imminent before resorting to deadly force. Thankfully, that moment never came.  He saved a life by not pulling the trigger, and he potentially saved his family from a protracted legal fight.