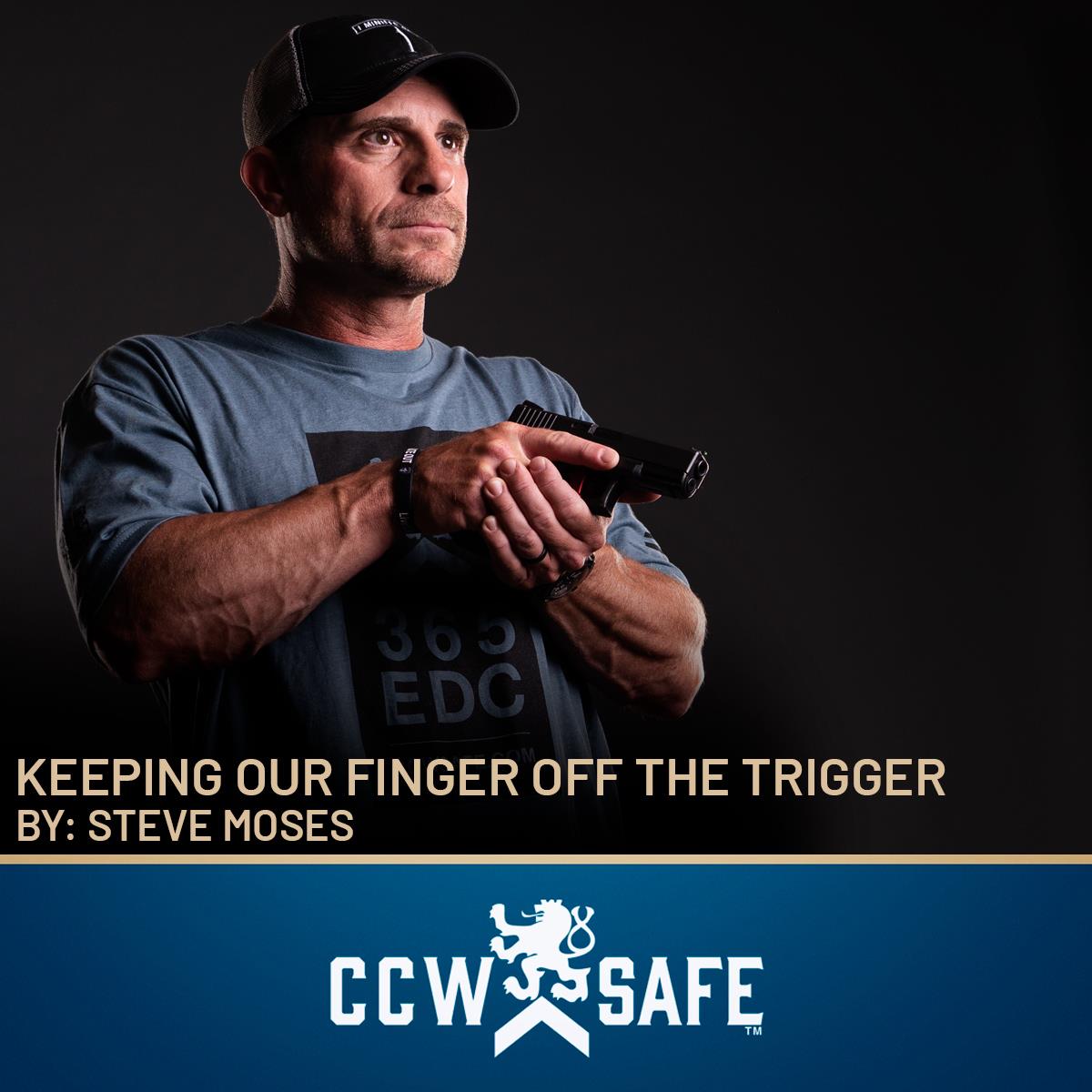 Posted on May 23, 2022 by Grady Epperly in Uncategorized

Keeping Our Finger Off the Trigger

To the best of my knowledge, one of the fundamental firearms safety rules championed by the National Rifle Association is as follows: Always keep your finger off the trigger until ready to shoot. When holding a gun, rest your trigger finger outside the trigger guard alongside the gun. Until you are actually ready to fire, do not touch the trigger.

Modern guns will for the most part not fire unless the trigger is pulled. This is because most manufacturers incorporate safeties that block the firing pin or striker or the trigger. In addition, modern guns are typically drop-safe which simply means that more than impact with a hard surface is required to make the handgun fire. It should come as no surprise then that almost all inadvertent discharges occur because a finger or an object found its way to the inside of the trigger guard and came into contact with the trigger. Unfortunately, the most common cause of inadvertent discharges is making conscious or unconscious contact with the shooter’s trigger finger.

Ask any firearms trainer who works with new students on which safety rule is violated the most and it is almost always going to be touching the trigger with the trigger finger when the sights are not being aligned with the target. Why is this? I do not know. My generation played games with toy handguns and watched Western television and movies and ran around with our fingers on the triggers of our toy pistols, and most of the actors always had their fingers on the trigger when posing for pictures and acting. Not a lot has changed over the years, and I still get dirty looks from my wife when I am about to “mansplain” to her for the hundredth time about how lousy the gunhandling is in the average Netflix or Amazon Prime movie.

It probably does not matter what the “Why” is. What matters is the “How” as in How do we do we fix it. It is critical that concealed carriers handle their defensive firearms in a specific, robust, and repeated manner if they want to avoid an inadvertent discharge that has irreversible consequences. The gun does not “just go off.” It almost certainly went off because the concealed carrier either had their trigger finger on the trigger from the beginning OR actually had their finger resting outside the trigger guard alongside the gun but in such a position that only a very small and perhaps involuntary movement on their part caused it to make contact with the trigger.

I have been a student in over a hundred of classes and have spent a lot of time around other professional trainers. I have heard trainers use the following terms (as well as others):

“Get your finger off the trigger.”

“Finger on the frame or slide.”

And so on. It is all too easy for trainers to forget what it was like to be a new concealed carrier when we use language that we are familiar with when communicating with new concealed carriers. My wife has thirty years of experience in non-profit accounting and is the financial manager for an organization that provides services and counseling for victims of sexual abuse and domestic violence and when asked about her day frequently uses terms that I have never heard or do not know what they mean. After all, “trigger finger straight” means all I need to do is straighten my finger, and all “get your finger off the trigger” means is that my finger should not make contact with the trigger, right?

The purpose of this article is to describe a gunhandling technique that is not only simple but as safe as is reasonably possible for minimizing the chances of an inadvertent discharge caused by making contact with the trigger that also conforms to all five of the commands set out above.

Unless the sights are on the target with the intent to shoot, the trigger finger should be as straight as possible, outside of and above the trigger guard, and indexed against the frame of the revolver or semi-automatic pistol or ideally on the slide of the automatic pistol.

I wrote this article knowing that it may not resonate with experienced concealed carriers. The number of concealed carriers in the United States has literally exploded while the percentage of them that seek professional training has likely remained the same, which may be as low as one percent (1%). If shooters new to concealed carry are willing to learn the gunhandling technique that I described above then their chances of being surprised by the loudest “BANG” they may ever hear may be greatly reduced.