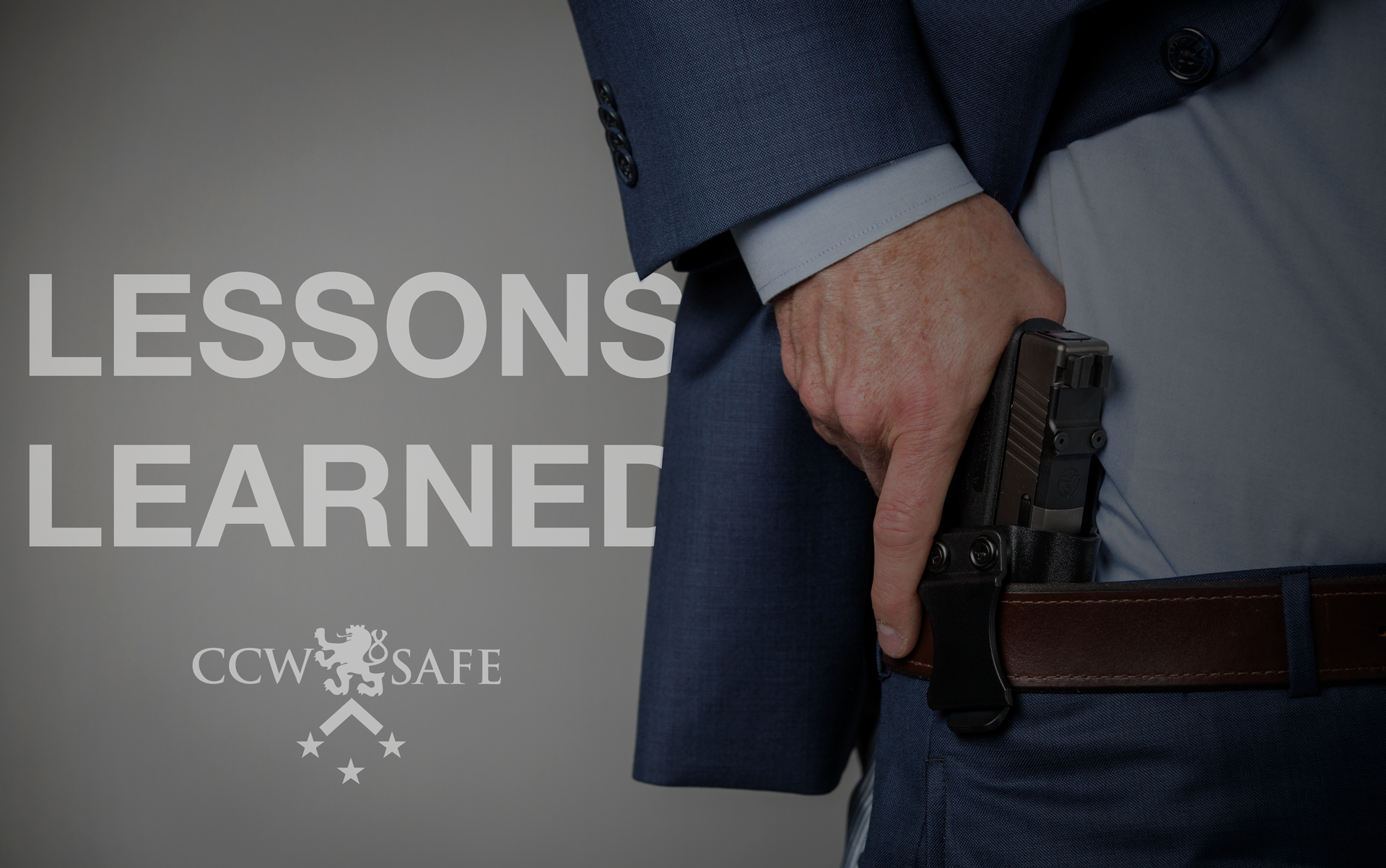 Posted on October 10, 2017 by support@ccwsafe.com in Shawn Vincent

Knowing When Not to Shoot: The Lee Bartlett Story

When we examine self-defense cases, looking for lessons for the concealed carrier, we all too often find that shootings — even when justified — could have been avoided.  It’s much easier to find examples of shootings gone wrong than it is to find examples where potentially deadly encounters were de-escalated.  That’s why a comment from CCW Safe member Lee Bartlett from Texas caught our attention.

On our website, Lee described an encounter he had around midnight in a dark parking lot where his experience, his good judgement, and his training prevented a tragedy.

Lee used to be in law enforcement, but took a medical retirement when a condition kept him from managing the rigors of a patrol officer.  While he never had to fire his service pistol in the line of duty, once he came very close.  Responding to a domestic violence call, Lee encountered an angry, intoxicated man — a retired Marine who was wielding an axe handle, making threats, and failing to respond to the officer’s instructions.  Lee pulled his weapon and aimed it at the man.  When physical conflict appeared imminent and unavoidable, Lee felt himself putting pressure on the trigger. “I cannot believe I’m going to have to shoot this guy,” he thought.

At the last moment, Lee’s Sergeant came from the side, tackling the assailant.  Relieved, Lee holstered his pistol, and the two officers managed to subdue the suspect without using deadly force.  Lee felt grateful he didn’t have to shoot that night.  He knew other officers who had been killed in the line of duty, and he saw the emotional toll it took.  He says, “You make a decision that is justified, and you have to live with it.”

As a private citizen, Lee carries — usually keeping his pistol locked in the center console of his truck.  Carrying is a responsibility he takes very seriously. “You never know when you’re going to need it,” he says.

When Lee left his house near midnight one recent evening, he had no idea that it would be the day when he might need it.  Arriving at a fast food restaurant, he noticed that the dining room had closed but that the drive-through was still open.  Since he was on the phone with a friend, instead of interrupting the conversation by placing an order, he pulled into a parking space in the dark, empty lot.

Moments later, a car with three young men pulled into the spot directly next to his.  They were staring at him and speaking, but Lee couldn’t understand as they were speaking Spanish. At first, he thought maybe they knew someone who worked at the restaurant, but he wondered why, with an empty parking lot, they would pull into the space right next to his.  Feeling uncomfortable, Lee put the truck in gear and drove to a spot on the other side of the lot.

The car followed.  The men pulled up inches away from Lee’s truck.  The driver rolled down his window and began yelling — aggressively and incoherently.

Once again, Lee drove away, this time heading to the drive-through lane, curious to see if the car would follow.  It did.

Lee hung up the phone and placed his order.  When he got the food, he decided to pull up to a yellow line in the lane — the spot you sometimes have to pull up to if your food’s not quite ready.  He wondered whether the men in the car were going to order or whether they were just following him.  When they got to the window, they cancelled their order.  They were following him.

Lee suddenly felt very uneasy.  He feared that if he pulled away, the men would follow him.  He thought he would be more vulnerable alone on the open road than he would in the restaurant parking lot.  If something was going to happen, Lee decided, it was going to happen right there.

With one hand, Lee dialed 911.  With the other, he opened the center console where he kept his pistol.  The car pulled up beside him.  The men stared at Lee.  Lee stared back.  After a long tense moment, the car pulled away.

He reported the encounter to the 911 operator, and when he felt safe, Lee drove home — slightly shaken, but alive.  With different choices, Lee could have easily been involved in a shooting. Instead of driving home to his wife, he could have been in the back of a police cruiser.  Or worse.

Here’s what Lee did right in his encounter with the young men:

Lee tried three times to de-escalate the situation by pulling away.  During any of the encounters, he could have rolled down his window and engaged the men.  If they had ill intentions — and it seems likely that they did — an altercation may have occurred right then and there, and it’s impossible to know how it would have ended.

Each time Lee drove away (and each time the men followed) Lee became justifiably more concerned. Had he chosen to use deadly force, the multiple escalations by the strangers in the car would have justified reasonable fear, but Lee, with all his police training, knew there was a critical element missing: imminent threat of death or bodily injury.

While the men may have been armed, Lee didn’t know for sure.  If he had fired preemptively, he may have fired on unarmed men, and he almost certainly would have been arrested and faced charges.  Lee waited, however, and ultimately the men retreated and never threatened force.

Lee dialed 911, and calling for help was the right thing to do. Had the men chosen to violently engage Lee, the audio of the encounter would have been recorded on the emergency line, and it would likely have demonstrated that the other men were the aggressors.  Also, by calling 911, Lee was on record that he felt threatened, helping to establish his reasonable fear.

Some people may find Lee’s decision to stay at the restaurant for a final confrontation somewhat controversial.  From one perspective, it may seem like Lee missed an opportunity to retreat.  From another point-of-view however, Lee was probably right to think that he would have been more vulnerable alone on the dark, empty road.  By leaving, he could have put himself in greater danger, and he chose, instead, to stand his ground.

That’s the true spirit of the controversial “stand-your-ground” laws: they’re meant to let the person in the dangerous situation make the decision they think is right to best protect themselves, and retreating is not always the safest option.

As a Texan, Lee lives in a “stand-your-ground” state.  Luckily, Lee was able to diffuse the situation, but had the men in the car decided to engage, and had Lee been forced to use his firearm, it looks like Lee did practically everything right to make a justifiable self-defense claim.  He made several efforts to de-escalate; he called 911; and even though he felt threatened, he waited to see if the threat of injury or death became imminent — which, thankfully, it never did.

For an example of how badly the encounter could have gone with someone of lesser judgement, we can look at the Michael Dunn case in Jacksonville, FL where the shooting of Jordan Davis made headlines.

In the Dunn case, Michael Dunn pulled into a convenience store and parked in a spot immediately adjacent to a vehicle with Jordan Davis and three of his friends.  While Dunn’s fiancee went in the store to buy snacks, Dunn and Davis got into an argument over loud music.  Davis became enraged and started making threats.  Dunn responded by retrieving his pistol from the glove box and firing multiple times into Davis’ vehicle, killing Davis and miraculously missing all the other occupants.

At trial, Dunn testified that he saw Davis brandish the barrel of a gun, but during the police investigation, no weapon was found in Davis’ vehicle.  Dunn ultimately was convicted of murder and three counts of attempted murder.  He’ll spend the rest of his life in prison.

The contrast between Lee’s story and the Dunn case demonstrates how very similar circumstances can produce wildly different results, and is a great example of the Citizen’s Use of Force Continuum that has been developed by CCW Safe.  It is a lesson in what a grave responsibility the decision to carry really is, and Lee’s story serves as an excellent example of the restraint and judgement being a concealed carrier demands.